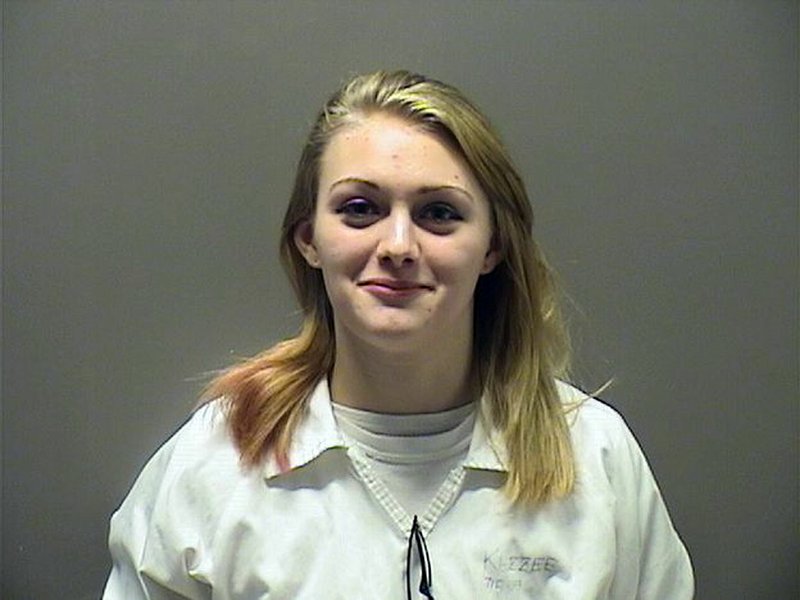 HOT SPRINGS -- A Hot Springs area woman who was arrested last year after her 20-month-old daughter strangled on a child seat buckle was sentenced to seven months in jail after pleading guilty Monday to a misdemeanor count of negligent homicide in Garland County Circuit Court.

Summer Rose Kazzee, 22, has remained in custody since her arrest on Nov. 7 after her parole was revoked from a 2018 conviction on a felony charge of first-degree endangering the welfare of a minor for allowing her newborn son to starve while in her care in 2016.

Kazzee was sentenced to six months in jail for the revocation, which will run concurrently with the new seven-month sentence, and she will be given credit for time served since her arrest. Chief Deputy Prosecuting Attorney Kara Petro noted Tuesday that the Parole Board could opt to extend her revocation sentence based on the new conviction.

After a two-day trial, a six-man, six-woman circuit court jury found Kazzee guilty on Jan. 24, 2018, of endangering her son, who was emaciated and at 8 weeks old weighed less than his birth weight. The child had been under her care and that of her boyfriend, Kody Weber-Kio, 22, who had pleaded guilty to the same charge a day earlier and was sentenced to the maximum of six years in prison.

The jury recommended a sentence of three years in prison for Kazzee, and she was paroled about eight months later.

"The last time she was facing six years, and the jury gave her three," Petro said. "It's always a risk taking the case to a jury because you don't know if they will give her the max or acquit her. She was going to claim she buckled the car seat and it came undone."

According to the probable-cause affidavit on the negligent-homicide charge, on Aug. 17, shortly before 5:30 p.m., Hot Springs police were called to a residence on Snyder Street regarding an unresponsive child. Fire Department personnel and LifeNet performed CPR on the 20-month-old toddler, and she was transported to National Park Medical Center where she was pronounced dead a short time later.

The affidavit states that Kazzee, the child's mother, told police that she had tried to put her twins, including the victim, down for a nap by placing them on a bed in a rear bedroom. Her daughter kept getting off the bed, so she put the child in her old car seat on the floor next to the bed to get her to take a nap.

Kazzee said she strapped the top and bottom straps, and her daughter was "rocking herself to sleep." She said she left the bedroom, pulled the door shut and went to the living room at the front of the house.

She had last checked on her daughter at 4:30 p.m. and said the child was still rocking and "clapping her hands." When she checked on the girl again at 5 p.m., she found the toddler unresponsive in the car seat with "the thing in her throat," explaining that she meant the seat's top buckle.

When questioned again on Aug. 28, Kazzee said she used part of a blanket to tie around the bottom buckle so her daughter "would not mess with it.

When confronted with the "unlikeliness of [her child] being able to unbuckle the bottom buckle," Kazzee admitted that she "may not have buckled it all the way." A warrant was later issued for her arrest.

Petro said the medical examiner measured the straps and the length of the victim and determined that the child could not have unbuckled the strap herself.

She noted that the child was in an infant car seat so "she was a little too big" and the seat was only buckled at the top and not at the bottom so the victim could move around and "was able to scoot down to the bottom."

Petro said the child got the buckle across her neck where it "put pressure on the blood vessels in her neck" and "restricted the blood flow" so she was "strangled in a sense."

Kazzee was in the living room and the child was in a back bedroom, separated by the kitchen and a long hallway, Petro said.

"[Kazzee] said she put her down for a nap, but then said she could hear her rocking," Petro said. "If the goal was for her to be sleeping and she could hear her moving around, why would she leave her back there? Why would you leave a child in a car seat on the floor for an hour if she's awake?"

She said the circumstances of the incident fit the definition of negligent homicide and Kazzee was negligent in leaving the child unattended for so long.

Asked how she arrived at the seven-month sentence, Petro said that with a plea deal "you have to offer them something," but she didn't want to cut the potential maximum sentence of one year in jail in half so she opted for "a little more than half."

Petro said she was able to get a permanent court order in place barring Kazzee from contact with her older son after the endangering trial, but she had no jurisdiction over the twins who were born later and were about 2 months old at the time of the trial, nor does she have jurisdiction over the remaining twin.

"My main goal is to protect future children," she said.