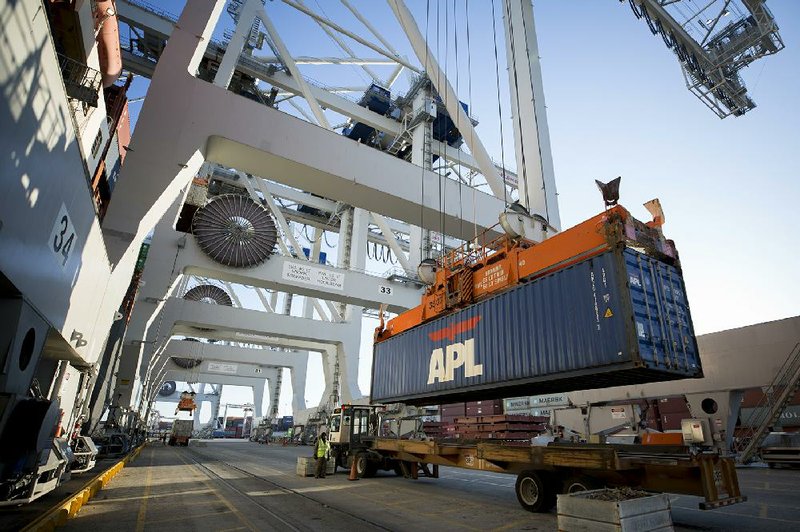 A crane lifts a shipping container onto a vessel in 2018 at the Port of Savannah in Savannah, Ga. (AP/Stephen B. Morton)

SAVANNAH, Ga. -- The amount of cargo moving through Georgia's seaports reached record levels in the past year, in part because of continued growth fueled by larger ships traversing the expanded Panama Canal, the Georgia Ports Authority's top executive said Tuesday.

The state-operated ports in Savannah and Brunswick handled 38.5 million tons of imports and exports in calendar 2019, the agency reported. That's an increase of 4.3% compared with the previous year.

The number of cargo containers, large metal boxes used to ship goods from consumer electronics to frozen chickens, moving across the docks at the Port of Savannah also reached record highs last year. The port handled 4.6 million container units through December, up 5.6% from 2018.

Griff Lynch, the port authority's executive director, attributed much of the 2019 growth to the expansion of the Panama Canal that opened nearly four years ago. He said shippers are still increasing the size of the vessels using the route, funneling more cargo to the East Coast.

"On the container side, I think it still comes down to the expansion of the canal," Lynch said. "We're still enjoying the fruits of that."

Savannah is the fourth-busiest U.S. port for shipping containerized cargo, behind only the Port of New York and New Jersey, and the ports of Los Angeles and Long Beach, Calif.

The Army Corps of Engineers is overseeing a $973 million deepening of the shipping channel that connects Savannah's port to the Atlantic Ocean to make room for the larger ships. Work on the project's second half began in September and is expected to be complete by the end of 2021.

Now he expects Georgia to benefit after President Donald Trump signed the first part of a new U.S.-China trade agreement in which China has pledged to buy more U.S. agricultural products.

"We think that's going to be a big deal for us," Lynch said. "We're already seeing it. Poultry is starting to move again, and that has been flat for several years."