RECIPES: An omnivore mom’s journey to feed her vegetarian child 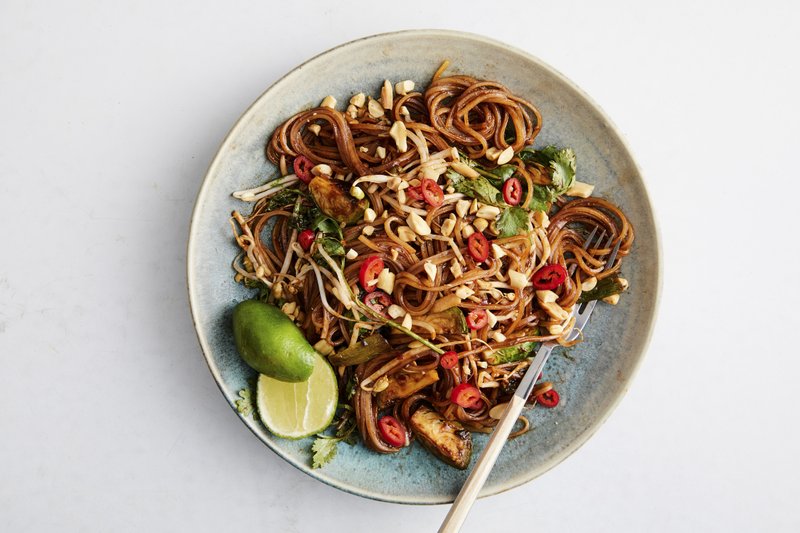 On Jan. 1 of last year, I began cooking as a vegetarian. Not because I became vegetarian — that would be professionally untenable — but because my younger child did, thus upending most of my hard-won weeknight cooking strategies.

I didn't think of myself as an animal-centric cook, just your basic modern omnivore. Steaks and lamb chops were an occasional treat, not a routine dinner. But I soon realized that I'd been relying on shortcuts like bacon, anchovy paste, pancetta and fish sauce.

At the same time, I began research on a project about how to cook and eat with less impact on the environment. What I learned made me want to eat not only less meat but also less dairy, which can be just as harmful. It didn't seem right to simply replace recipes that call for a pound of meat with recipes that call for a pound of cheese, so vegan cooking was also newly intriguing.

It didn't seem impossible. I knew about putting vegetables at the center of the plate, I had mastered "put an egg on it," and we already ate salad most nights. So I collected a fresh batch of recipes, laid in a supply of legumes and embarked on my new kitchen life.

The first few weeks, I did what felt normal: I cooked a couple of different things on the nights we all sat down to eat together. But dinner was never on the table before 9 p.m., the food was strangely unsatisfying and the kitchen was absolutely wrecked.

I tacked toward one-dish and one-pot meals. This worked for a while. We had penne with tomatoes and eggplant, followed by pad Thai, followed by macaroni and cheese, at which point there was a mutiny. Noodles every night was not the solution.

So I reached out to my trusted plant-based sources to find out why my omnivore's skills produced vegetarian failures, and to reteach me how to cook. Here are their critiques:

■ To make sure dinner was filling, I was stuffing everyone with starch.

"A plant-based diet is not going to work exactly like a meat-based one," said Rich Landau, chef and co-owner of Vedge and other vegetarian restaurants in Philadelphia and Washington. "It's just not going to fill you up the same way." In other words, it's likely that a plant-based dinner at 7 p.m. may not carry everyone over until breakfast the next day. "Herbivores are grazers," he added.

The fact that my kids were peckish at 9:30 p.m. didn't mean that I had failed at dinner. It simply meant that I needed to lay in more substantial snacks and let go.

■ I needed to push more flavor into everything.

For meat eaters, the natural umami in meat and fish is satiating. Even if the roasted potatoes alongside are plain and the salad dressing is basic, the savoriness brings satisfaction. Without that to lean on, everything on the plate wants to be thoroughly and thoughtfully seasoned, including basics such as grains and beans.

"Just using enough salt will get you halfway there," said Raquel Pelzel, author of Umami Bomb (Workman, 2019), a book of vegetarian recipes built around umami-rich ingredients: cooked tomatoes, mushrooms and parmesan cheese. Then, she said, build elements like sweetness, heat, acid and smoke. (Smoked paprika is vegan sorcery, used in everything that I once flavored with bacon. I picked up a new trick for the spice from Sababa, a cookbook of Israel-inspired food: The author, Adeena Sussman, recommends stirring it in at the end of cooking, to preserve its bright taste.)

■ I was avoiding meat and dairy substitutes for no good reason.

The fact is that there are many products on the market that are delicious on their own terms, and more and more foods that are doing a good job of pretending to be meat and dairy. Go out and try them. Thanks to the recipes in I Can Cook Vegan, by chef Isa Chandra Moskowitz, coconut oil is my new best friend.

■ I was trying to cook too many things.

I phoned a fiendishly good home cook of my acquaintance, whose children have been through vegan, vegetarian and pescatarian stages. She spoke some hard truths. "The thing about a vegetable is that you can't just unwrap it, salt it, sear it and put it in the middle of the plate," she said. Washing, peeling, cutting and sometimes even blanching must be done before you get to the cooking. "Vegetables just take more work," she said.

We can't let that dissuade us from cooking them, but we can remember that one or two vegetables to work with on a weeknight is plenty for most home cooks. A bunch of roasted carrots with yogurt and the nutty spice mix dukkah is dinner; a pile of lemony broccoli or broccoli raab on grilled bread is dinner; spicy tomato soup with bread and cheese is most definitely dinner.

■ I was being snobbish about frozen vegetables.

Pulling off a weeknight vegetarian dinner with variety, like a sheet-pan dinner, a vegetable stew or a stir-fry, means having some par-cooked vegetables on hand. New vegetarians are often advised to do a big vegetable shop once a week and prep everything at once. I did it but was discouraged by the fact that at the end of all that labor, I still had to cook everything as the week went on.

Bhavna Patel, a home cook in Lake City, Fla., with a popular YouTube channel, grew up in Gujarat, India, where a majority of people are vegetarian or vegan. She has streamlined her family's recipes, she said, and often relies on homemade frozen vegetables. If you are peeling and cutting them anyway, it's just as easy to boil them in salted water and freeze them in resealable bags. Or, find a brand you like and buy them. The route to dinner is much faster.

Even if a vegetarian recipe has a manageable number of ingredients and a short cooking time (like a stir-fry), it may take a while to get it on the table. That's because many food publications, including NYT Cooking, measure the cook time starting at the point where the ingredients are already assembled and prepped. (There's such a wide range of kitchen skills, it wouldn't be possible to say how long it takes a given cook to do that work.) So a recipe that begins with a pound of washed, stemmed and sliced kale, two cups of chopped onions and six minced garlic cloves is always going to take longer than the estimated time.

■ I had to stop living in fear.

I felt guilty when my eyes strayed toward the stash of chicken stock in the freezer and worried about adding fish sauce to a recipe. But your kitchen is not a restaurant, and you are not a giant corporation subject to labeling laws. If everyone decides that the Caesar salad dressing needs anchovies this week, no one will break down your door or take away your membership card. You still get to decide how to cook in your home. 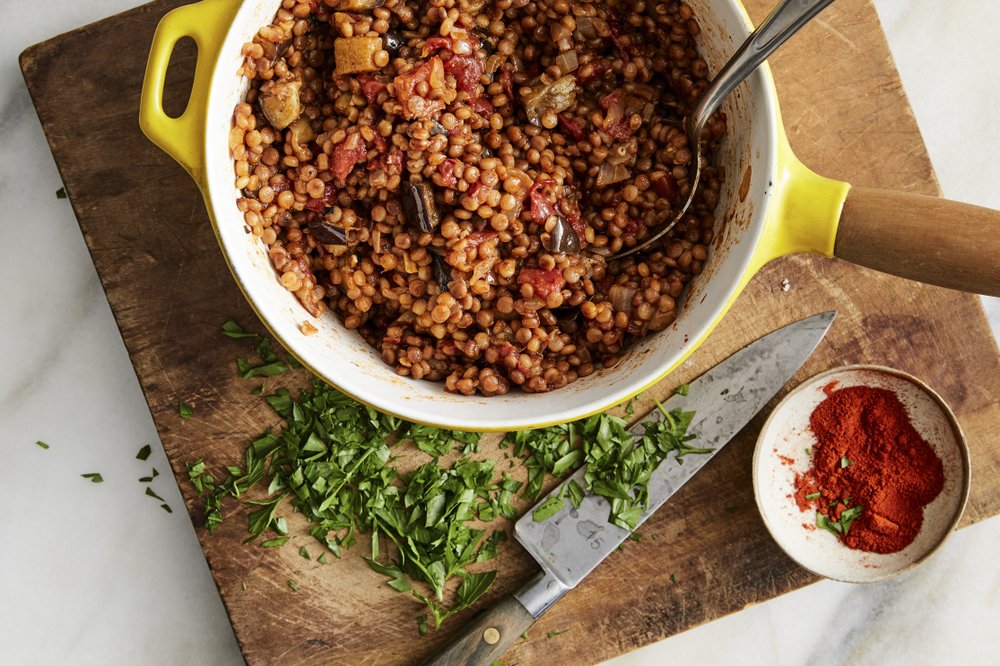 Heat a heavy pot (2 to 3 quarts) with a tight-fitting lid over medium until hot but not smoking. Add couscous and toast, stirring often, until golden and fragrant, about 3 minutes. Transfer toasted couscous to a bowl.

Add oil to the pot and raise heat to medium-high. When it shimmers, add eggplant, onion, ½ teaspoon salt and ¼ teaspoon pepper and cook, stirring often, until onions are softened and golden and the eggplant is browned and slightly shrunken, 8 to 10 minutes. Add garlic and stir just until fragrant.

Add tomato paste and the prepared spice mixture and cook, stirring, 1 minute. Stir in toasted couscous, tomato and­ 1½ cups water, cover, reduce the heat to low and simmer until the couscous has absorbed all the liquid, 8 to 12 minutes. Turn off the heat and let rest 2 minutes. Uncover, stir in paprika and parsley, then taste and adjust the seasoning with salt. Serve immediately and dollop with yogurt, if desired.

Make the sauce: In a blender or bowl, combine all the ingredients and mix until smooth. It should be thick but pourable like barbecue sauce; add water as needed to thin.

Cook noodles for stir-frying according to the package directions; they should be slightly underdone. After draining, rinse well with cold water to stop the cooking. Toss noodles with 1 teaspoon coconut oil to prevent sticking.

Thinly slice the white parts of the green onions and cut the pale and dark green parts into 1-inch lengths.

Heat a wok or large nonstick skillet over high. Add 2 tablespoons of the coconut oil and sprinkle in salt. Add brussels sprouts and sear, tossing occasionally, until browned and cooked through, about 5 minutes. Remove from the pan and set aside.

In the same pan over high heat, heat remaining 1 tablespoon coconut oil. Add green onions and cook, stirring often, just until wilted, about 2 minutes. Add garlic, stir, then pour in about half the sauce and stir until bubbling.

Add noodles and cook, tossing in the sauce until cooked through, about 2 minutes. Add the remaining sauce, cooked brussels sprouts, cilantro and bean sprouts, if using; toss to coat and heat through.

Divide among plates. Garnish with peanuts, chile and lime wedges (if using) and serve immediately.