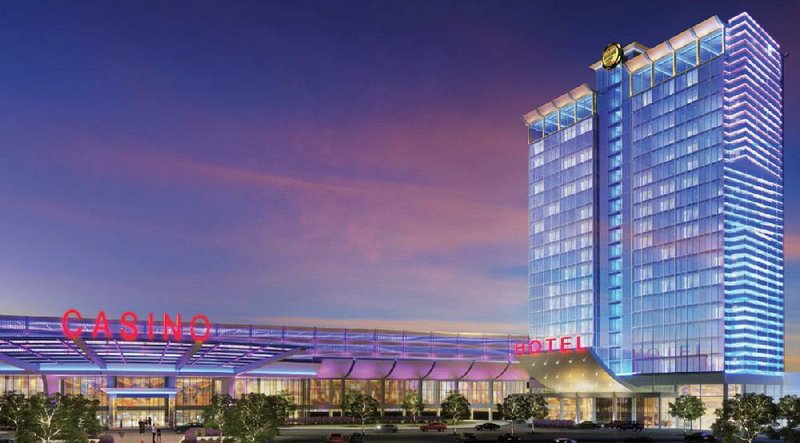 An artist’s rendering released by Southland Gaming & Racing shows a planned $250 million addition, including a casino complex and hotel, at the facility’s West Memphis site.

With the Super Bowl on Sunday, Southland Casino Racing in West Memphis started offering sports betting on Tuesday in what its officials described as a soft opening.

While sports betting also is authorized in Mississippi, "our proximity to Memphis gives us an edge in the sports betting market," she said in an email to the Arkansas Democrat-Gazette.

The seven-member Arkansas Racing Commission on Saturday unanimously voted to authorize the casino to begin offering sports betting, said Scott Hardin, a spokesman for the state Department of Finance and Administration.

"We have been working toward this for a while," Jeff Strang, Southland's senior marketing director, said Tuesday.

The commission's approval of the sports wagering program and Southland's parent company's agreement with International Game Technology PLC cleared the way for Southland to begin offering sports wagering, he said.

"Delaware North is confidently partnering with IGT to deliver sports betting to our customers and the many sports fans in West Virginia and Arkansas through world-class IGT PlaySports technology," Brian Hansberry, Delaware North's Gaming Division president, said in a news release.

"IGT is a serious sports betting technology provider with a proven commitment to customer success, excellent global reputation, and a reliable, omni-channel sports betting solution for the U.S. market," he said. "We believe the IGT PlaySports solution will help us establish Delaware North as a preferred sports betting provider in West Virginia and Arkansas while enabling us to further reward our Lucky North Club members" -- a reference to Delaware North's loyalty program.

The IGT system is the same one that the Saracen Casino Resort in Pine Bluff uses, David Wolf, Southland's president and general manager, told the commission on Saturday, according to a recording of the commission's meeting.

The sports betting will be offered in two retail locations at Southland, the casino's attorney, Stephen Lancaster, said in an email to the Racing Commission's legal counsel, Byron Freeland.

"We are doing a soft opening, so as soon we go live, we'll tell the world," Wolf said Saturday.

"We are giving it to our current customers and then we'll start doing it on TV and radio and billboards within a 48-hour notice. We don't want to get overwhelmed. The customers know something is happening, and my phone keeps ringing off the hook," he said.

Amendment 100 to the Arkansas Constitution, approved by voters in November 2018, authorized what is now called Southland Casino Racing in West Memphis and Oaklawn Racing Casino Resort in Hot Springs to expand into full-fledged casinos. The amendment also allows the Racing Commission to license a casino apiece in Jefferson and Pope counties. The constitutional amendment also authorized sports betting at the casinos.

The Saracen Casino Resort in Pine Bluff starting offering sports betting at the Saracen Casino Annex on Oct. 1, after the commission authorized it the previous day. The annex is connected to the Saracen Q Store and has 300 slot machines. Casino officials plan to open an 80,000-square-foot casino with 2,000 slots across the street by the end of this year.

The handle at Saracen's sportsbook totaled $284,202 in October, increased to $597,828 in November and then slipped to $507,748 in December, according to a Racing Commission report. The report showed the total bet on Saracen's slot machines ranged from $61 million to $62 million a month during this period.

The commission has not yet granted a license to build and operate a casino in Pope County.

Since July, the total bet on Southland's slot machines has ranged each month from $260 million in September to $286 million in December, according to a Racing Commission report.

A year ago, Southland officials announced plans for an expansion that includes a new casino complex and a 20-story hotel.