Elizabeth Eckford: Time at Central High School in '57 'was hell every day' 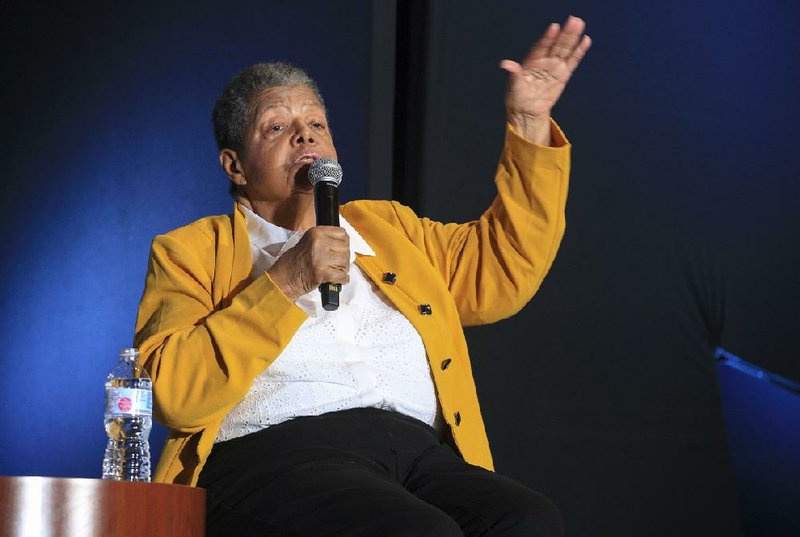 Elizabeth Eckford, a member of the Little Rock Nine, speaks Wednesday in Little Rock about her experiences as one of the first black students to desegregate Little Rock Central High in 1957. The event at the Statehouse Convention Center in Little Rock was a partnership between the UA Clinton School of Public Service and the Association of Presbyterian Church Educators. More photos at arkansasonline.com/130eckford/. (Arkansas Democrat-Gazette/Staton Breidenthal)

Elizabeth Eckford, one of the nine black teenagers who faced angry white mobs, armed soldiers and daily torment to desegregate Little Rock's Central High School in 1957-58, on Wednesday recalled that she was a rule-following teenager who "was scared most of the time."

"It was hell every day, every day," Eckford said of her role in what is one of the nation's greatest constitutional crises since the Civil War.

"But ordinary people, when in extraordinary circumstances, can do extraordinary things," Eckford told an audience of about 1,000 in the Wally Allen Ballroom at the Statehouse Convention Center.

"Sometimes you can continue on even when you are very, very afraid," she said in response to a question about the source of her courage on Sept. 4, 1957, when she arrived at Central High by herself only to be turned away by the Arkansas National Guard and threatening protesters.

In her presentation -- which was a University of Arkansas Clinton School of Public Service Speaker Series' event -- a seated, conversational Eckford recounted her often grim experiences at Central, sprinkling in some humor at times, as well as offering opinions on more current matters, including her dim view of statues of Confederate officers and soldiers.

Eckford said the Wednesday speech will likely be her last to a large group because, at 78, she has "one foot on a banana peel."

In early 1957, the Little Rock School District made arrangements to admit carefully selected black students to the all-white Central High to comply with the 1954 U.S. Supreme Court's declaration that schools that were racially segregated by law were unconstitutional.

The district sought what Eckford described as a token number of black students for that role who would not fight or talk back and who would not seek to participate in after-school activities. The nine students were initially barred from the school by the Arkansas National Guard on orders of Gov. Orval Faubus, who said he did it to prevent violence.

Eckford said her mother, the "Queen of No," who worked in the laundry at a school for blind and deaf black students, was very protective of her six children -- to the point that they weren't allowed to participate in after-school activities. But she did eventually acquiesce to Eckford's request to go to Central High.

Eckford said she believes that she was the very last of the black students to be selected to attend Central in the process that required her and her parents to interview with then-Superintendent Virgil Blossom.

"I guess I was chosen because they thought I would not be a problem," she said.

Eckford said she didn't really know all of the other black students signed up for Central that year. But her grandfather, a shopkeeper with a habit of asking people about their families, was more than able to fill that void, giving her "two generations" of history on each one.

Regardless, Eckford arrived at the school by herself that September day.

She told Wednesday how, on that day, soldiers turned her away from the school at three different points and steered her toward the shouting crowd before she realized that no one was going to let her in the building.

She said she headed to what she perceived to be the safety of the corner bus stop, refusing to talk because she feared crying. Someone near her was shouting about finding a tree and a rope, she said, a reference to lynching.

Always taught to go to adults for help, Eckford recalled approaching an elderly white woman, but the woman spat on her.

"It took me decades to learn that an officer of the Arkansas National Guard sent an armed soldier in my vicinity to see that no physical harm came to me," Eckford said Wednesday. "Additionally four local reporters stood behind that bench so that people could not get at me from behind. One of those reporters was a staunch segregationist but he had a bit of a conscience," she said. She also said that reporters from the Washington Post and New York Times tried to comfort her, telling her not to let the crowd see her cry.

One of those reporters and a white woman who sat with Eckford drew some of the anger of the mob before the bus finally arrived, Eckford recalled. The bus bench has since been re-created at 16th and Park streets, through the efforts and donations of Central students and community members, for which Eckford said she is grateful.

Ultimately President Dwight Eisenhower became involved in the desegregation of Central, ordering the Army's 101st Airborne Division and the federalized Arkansas National Guard soldiers to uphold the law and protect the nine students, to enable them to enter and attend the school. Their first full day of classes was Sept. 25, 1957.

But even inside the school, the nine black students were "knocked about daily" by some of the other students and treated poorly by some teachers, Eckford said, recalling the teacher who didn't want to touch Eckford's hand in the exchange of money for the Weekly Reader student newspaper. The soldiers stationed inside the school often did not see the confrontations, and the principal didn't discipline the tormentors, she said.

The nine black students learned defense tactics, such as walking fast or hugging the walls of lockers to minimize the pain of being shoved against them, she said. In her own case she inserted straight pins from her home sewing projects into the books that she held close to her chest so that the pin points projected out and deterred people who would otherwise bump into her head-on.

"What happens when most people are silent and turn their backs and do not react to what they see and hear is that the person being bullied is made to feel like they are getting what they deserve," she said.

Eckford did recall two girls who spoke kindly to her each day in her last period speech class. That meant the world to her, she said.

She urged audience members Wednesday to reach out to those they see who are being bullied, not necessarily to defend them but to "acknowledge their humanity. Treat them how you want to be treated. Exercise the Golden Rule.

"That can be very powerful," she continued. "When you do that, you are helping someone live another day. And that is not an exaggeration."

Eckford's address was made possible by the Clinton School of Public Service in partnership with Association of Presbyterian Church Educators, whose more than 700 members are meeting in Little Rock this week.

Eckford awed many in the crowd, who showed their appreciation for her not with applause but by fluttering their hands in the air -- done at the request of the program's host.

"I can hardly speak," Martha Bess DeWitt of Nashville, Tenn., said as Eckford, waving back to the audience, left the ballroom in a wheelchair. "I'm so honored to have had the opportunity to hear her."

"It was awesome," Andrea Franklin of Little Rock said of hearing Eckford speak for the first time.

Eckford, who graduated from Central State University in Wilberforce, Ohio, and served in the U.S. Army, is a longtime resident of Little Rock. She, along with other members of the Little Rock Nine, received the Congressional Gold Medal, the nation's highest civilian award, in 1999. 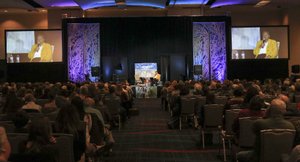 A crowd at the Statehouse Convention Center listens Wednesday as Elizabeth Eckford talks about her experiences as one of the Little Rock Nine. More photos at arkansasonline.com/130eckford/. (Arkansas Democrat-Gazette/Staton Breidenthal)