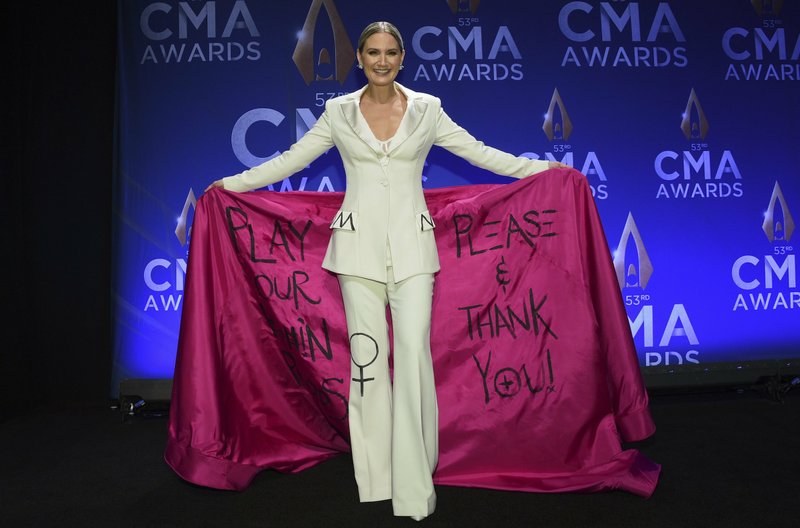 Singer-actress Jennifer Nettles wears an outfit with wording asking radio stations to play more songs by women at the 53rd annual CMA Awards telecast in Nashville, Tenn., on Nov. 13. What started as a joke on Twitter about an unwritten rule among country radio stations not to play two female artists in a row prompted anger from country music stars, but also pledges to give women equal airtime. (Invision/AP file photo/Evan Agostini)

NASHVILLE, Tenn. — What started as a joke on Twitter about an unwritten rule among country radio stations not to play two female artists in a row prompted anger from country music stars, but also pledges to give women equal airtime.

A now-deleted tweet by a Michigan radio station WKCQ-FM earlier this month claimed "we cannot play two females back to back" in response to a writer for Variety magazine. The station's parent company later denied that was ever a rule, but the fire that had been steadily smoldering for years over the perceived barriers to women in country music had already been reignited.

Grammy-winning country singer Kacey Musgraves snapped back on Twitter to the station, "And yet, they can play 18 dudes who sound exactly the same back to back."

Kelsea Ballerini chimed in to say, "I'm really sorry that in 2020, after years of conversation of equal play, there are still some companies that make their stations play by these rules."

But others took immediate action.

CMT announced Jan. 21 that they would institute equal airplay for female artists across their two channels. And a country radio station in Ontario, Canada, started an equal play initiative for one week, pledging to split the airplay time 50-50 between men and female voices.

The so-called rule against playing two women back to back is a familiar excuse heard by country singer Mickey Guyton, who was one of several female country stars tweeting about the controversy.

"I have also heard them say that women need to write better songs," said Guyton, in an email interview with The Associated Press.

"For the longest time, I was so scared to speak up because I was taught to fear losing the support of the industry, but you can't lose what you don't have," said Guyton, who has a new single called "Sister." "The people who have felt underrepresented are thanking me for standing up for something that they have seen go on for a long time."

"No women back to back" might not be a rule, but statistics show that overall country radio has put it in practice for the last two decades.

Jada Watson, a professor at the University of Ottawa who studies country music and gender, found that country radio has been for several years severely lopsided in how many female artists are played.

Her report found that between 2000 and 2018, there was a 66% decline in the number of songs by female artists on country radio.

"Ultimately what they're doing with these 50/50 and equal play campaigns is retraining an audience to be familiar with female voices, who've they not heard for the last decade," Watson said.

Still, this is not surprising information to anyone in country music. In 2015, a radio consultant who compared women to tomatoes in a salad and encouraged stations to remove female voices from their playlists prompted a similar call for changes in the industry.

Brittany Thompson, program director for CKLC-FM, a country radio station in Kingston, Ontario, said everyone in country music points fingers elsewhere when these gender discussions come up, whether it's at radio, labels or concert promoters.

"We will use our platform to hopefully at least not only start a discussion but show that you don't have to be scared of women on country radio," Thompson said.

Thompson said that prior to their equal play initiative, the station was playing about 40% female to 60% male artists for songs that are current. For recurrent and gold playlists, which are songs that have been released months or years prior, the disparity was much larger for women, Thompson said.

"We had a minuscule amount of women. There might have been a couple of Carrie Underwood songs. I don't think we had any Miranda Lambert songs," Thompson said.

Leslie Fram, senior vice president of music and talent at CMT, has been behind a number of initiatives meant to support new and existing female acts in country music, including the popular CMT Next Women of Country Tour. She dismissed the critics of equality pledges who say songs should be chosen based on merit, not gender.

"We are basing it on merit," Fram said. "We're saying the best song should win, but women should have an equal playing field."

Other initiatives some stations have taken include playing women for an entire hour or having programming that is dedicated to playing women. These initiatives are a little frustrating, but it's better than no action at all, said Brandy Clark, who will be part of CMT's Next Women of Country tour this year. She applauded CMT for its equality pledge.

"I hate that for women to get played we have to turn ourselves into even more of a minority," Clark said. "But it has to start somewhere. People can't like what they don't hear."

For Guyton, she wants to see more stations and companies pledge to play more women and stop adhering to false notions about what country listeners want to hear.

"I have a hard time believing that 50% of the population doesn't want to hear songs that represent them," Guyton said.