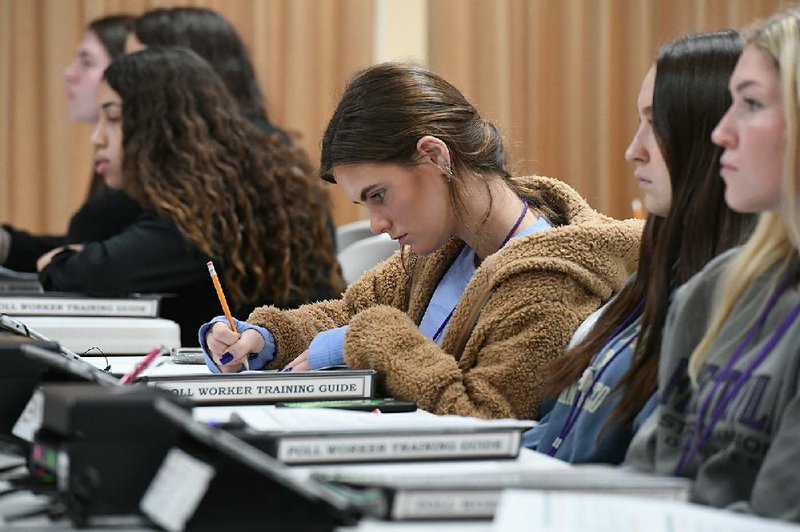 At the Washington County sheriff’s office in Fayetteville, Ailish Leahy trains Tuesday to be a poll worker. Around 80 students attended the training session. High school students can serve as poll workers under a new provision in state law. More photos are available at arkansasonline.com/130poll/ (NWA Democrat-Gazette/J.T. Wampler)

The students, who will remain volunteers, will be full-fledged poll workers this year as allowed under a new state law.

"We've always had student volunteers in the past," said Jennifer Price, Washington County's election director, "but they were limited in what they could do on Election Day."

Price said the county has more than 350 poll workers, and she doesn't anticipate any staffing problems. The county will have 45 voting centers for the primary election, which is March 3. In 2016, the previous presidential election year, there were 47,100 votes cast in the primary election.

"With all the poll workers, we will be in a good place come Election Day," Price said.

[Video not showing up above? Click here to watch » https://www.youtube.com/watch?v=2nM136cNT1c]

A call to the Pulaski County Election Commission about the amended state law was not returned Wednesday.

The training course covers the process to check in voters. It includes information about the state's voter identification laws, and what poll workers can and can't ask voters. The course covers laws on electioneering in polling places and when and how voters can be assisted.

The students were taught how the county's voting machines work and were briefed on any potential problems regarding use of the machines.

In one example, the students were shown that when a voter completes his ballot, he needs to press a button marked "Print" and not one marked "Exit." The exit button voids the choices that the voter made and requires him to start over.

Price said her focus isn't on getting students as poll workers as much as it is on giving young people some insight into the election process that might encourage them to participate as voters even if they don't serve as election workers. She said the training will be offered to new groups of students every election cycle.

Allison Dolan, an Advanced Placement government and politics teacher at Don Tyson School of Innovation in Springdale, said the Election Commission has worked with the school in conducting student government elections in the past. The law allows students to work in "real world" elections as part of their class work.

"We are very lucky that we get to do something unique," Dolan said.

Abby Herrera, a senior at Don Tyson School of Innovation, said she was struck by how detailed the training was.

"I was very interested in all the different little things poll workers have to do to make sure they give everyone the opportunity to vote," she said.

Herrera said she is interested in government and politics, and plans to remain active beyond the March 3 primary election.

"I'm very excited for March 3," she said. "I hope that wherever I go to college, I'll have the same opportunity to do it there or to come back home and do it for Washington County."

Price said about 75 students from Fayetteville High School participated in the training over two days, along with 30 from Springdale High School, 20-25 from Don Tyson School of Innovation, five from Lincoln and eight from Archer Learning Center in Springdale.

In Benton County, election officials aren't actively working with high schools in regard to the new law. Kim Dennison, election coordinator, said the Election Commission has reached out to high schools and school districts in the past looking for volunteers, but had little success.

Dennison said Benton County has enough poll workers to run its elections, so there's no pressure to find more. If the student workers pan out in Washington County, she said, she will be open to trying to replicate the effort in Benton County.

"They were really excited, and we're excited," Price said. "For these students, this will be the first time they get to vote, and they'll be able to participate in the election process, as well." 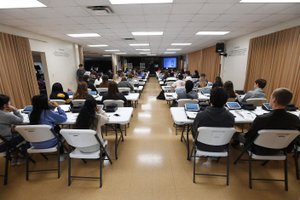 About 80 students from Fayetteville High School’s AP government class train Tuesday as poll workers at the Washington County Sheriff’s Office in Fayetteville. High school students can serve as poll workers under a new provision in state law. Before the change, the students could be volunteers but not poll workers. (NWA Democrat-Gazette/J.T. Wampler) 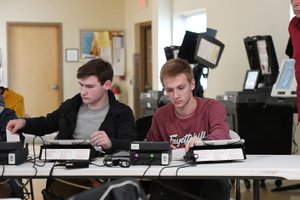 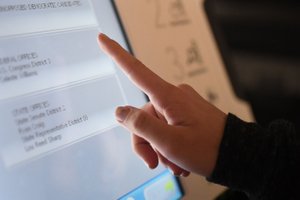