This Super Bowl has another gear 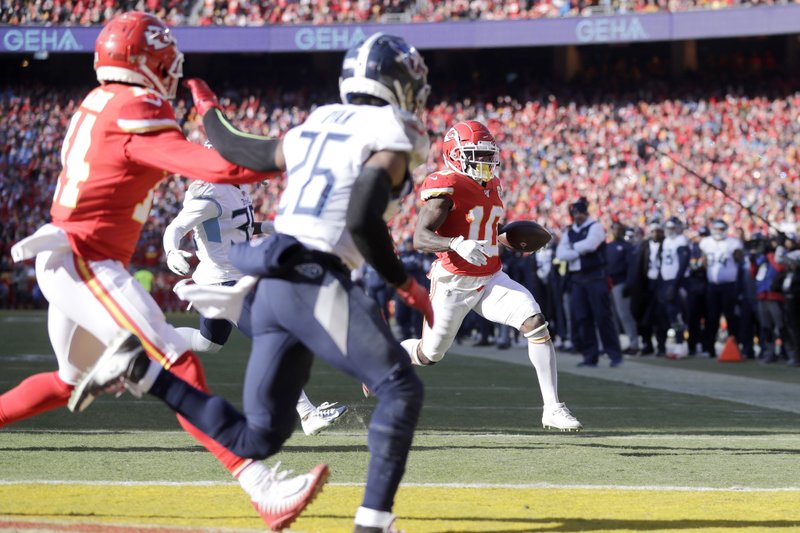 Led by Tyreek Hill (10), the Kansas City Chiefs bring the NFL’s fastest group of wide receivers into Sunday’s Super Bowl. But the San Francisco 49ers have plenty of speed as well. (AP/Charlie Riedel)

MIAMI -- Tyreek Hill has plans for the speedy Kansas City receivers after the Super Bowl.

"If I'm healthy and my mind is in the right place, I'd go try out for the Olympics, put together a relay," Hill said. "We'd show these track guys, 'Hey, we football players can do that, too.' "

Hill might have been kidding, but he'd sure have a speedy crew. Hill said he'd race with fellow receivers Mecole Hardman and Sammy Watkins, and cornerback Charvarius Ward in a relay team.

While that group might not be able to win a gold medal in Tokyo, it's enough to strike fear in opposing NFL coaches.

"It almost looks like they got their roster from the Olympic relay team and threw them all on the football field," San Francisco 49ers defensive coordinator Robert Saleh said. "Not to say they can't run routes and catch either, because they can do that. They're a special group, and you can see why they're there."

The Chiefs bring the NFL's fastest group of wide receivers led by Hill and Hardman into the Super Bowl against a 49ers team featuring plenty of speedsters as well.

It's no accident that the league's two fastest offenses are playing for the championship Sunday as offenses seek more and more to get playmakers the ball in space rather than just run it up the middle with brute force.

The Chiefs were the NFL's fastest team this season with ball carriers averaging a top speed of 13.34 mph, according to NextGen Stats compiled by SportRadar. The Niners were only a tick behind at 13.32 mph.

With so much speed on both sides, maybe they could hold a 400-meter relay race in place of the opening coin toss.

"If we do line up for a relay, they'd probably win," Niners safety Jimmie Ward said. "But one thing about it, this is football. There's such a thing as a helmet and shoulder pads. And we hit. We are very physical with how we hit."

The Niners have plenty of speed of their own, led by running back Raheem Mostert, who was clocked with the fastest time of the season for the 49ers at 22.85 mph.

Mostert said if he was putting together a relay team he'd use the running back room with himself, Tevin Coleman, Matt Breida and Jeff Wilson. Mostert, Breida and Coleman all ran the 40-yard dash leading up to their drafts under 4.4 seconds.

San Francisco's running backs led the league in average top speed with the ball with Breida's 22.3 mph on an 83-yard touchdown run against Cleveland the fastest time all season for a ball carrier. Mostert wasn't far behind when he hit 21.87 mph on a 36-yard touchdown run in the NFC title game against Green Bay.

Injured receiver Marquise Goodwin is faster than all of them, with a combine 40 time of 4.27 seconds. Goodwin competed in the 2012 Olympics as a long jumper and also is an accomplished sprinter.

The Chiefs speed is mostly at receiver, where they led the league in average top speed with Hill posting the top mark of 22.81 mph when he chased down teammate Damien Williams after a long run to celebrate in the end zone.

Hardman is right there with Hill when it comes to speed, giving Coach Andy Reid the deep threats he covets for his offense.

"I've only gone that fast like in a car, so I don't know how it feels other than that, but both those two are real fast guys," Reid said. "It gives you an opportunity to obviously stretch the field."

With so much speed on the field, it will put added pressure on the defenses to try to keep up.

That's not something that overly concerns Niners cornerback Richard Sherman, who has been one of the NFL's top cover cornerbacks since entering the league in 2011 despite a not-so-impressive 40 time at the combine of 4.56 seconds.

Print Headline: This Super Bowl has another gear