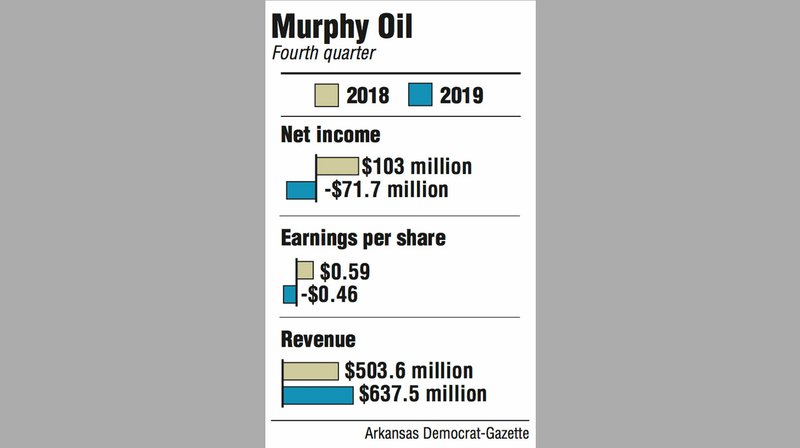 The El Dorado-based oil and natural gas company said Thursday that, adjusted for discontinued operations and one-time expenses, it earned 16 cents per share. That just missed the average earnings estimate of 17 cents per share by 15 analysts surveyed by Thomson Reuters.

Murphy Oil posted revenue for the quarter of $637.5 million, up 26.6% from last year's fourth quarter.

Roger Jenkins, Murphy's president and chief executive officer, said in the earnings report that the rise in 2019 net income resulted from strategic changes to the company's asset base. Increased oil production supported the growth, he said.

"This growth led to additional cash flow generation which, in addition to proceeds from the sale of [assets in] Malaysia, allowed us to return more than $660 million to shareholders through share repurchases and a competitive dividend," Jenkins said.

Murphy completed the sale of its Malaysian assets in July.

"With the transition out of Malaysia, increasing our Gulf of Mexico business, and continued investment in our onshore businesses, we have been able to maintain a sizable asset base," Jenkins said. The company also increased its proven developed reserves from 50% to 57%, he said.

Over the course of the year, Murphy reduced its outstanding shares by 12% through a $500 million share repurchase program. At year's end, the company had about $1.9 billion of liquidity, including about $307 million of cash and cash equivalents.

For 2020, Murphy plans capital expenditures in the range of $1.5 billion. The company plans to spend $680 million in South Texas' Eagle Ford Shale, up 13% from 2019. That budget includes $165 million for field development, with the rest going toward drilling new wells and bringing others online.

The company has also allocated $175 million to its Canadian onshore business, or 38% less than in 2019. Of $480 million earmarked for offshore assets, most will go to projects in the Gulf of Mexico, with 3% planned for Canadian offshore development drilling.

Murphy Oil is an international oil and natural gas exploration and production company. It has offshore production in Southeast Asia, Canada and the Gulf of Mexico as well as North American onshore operations.