While the Oscars might be Hollywood's biggest night, film fans in Tunisia already have something to celebrate about this year's race for the gold. Writer-directors Meryam Joobeur and Yves Piat both shot their Oscar-nominated live-action short films Brotherhood and Nefta Football Club there, and each reveals a side of the country that would surprise outsiders.

The country already has some cinematic notoriety because the house where Luke Skywalker lived in Star Wars is still standing, and Tunisia doubled for the Holy Land in Monty Python's The Life of Brian. Just as those 1970s classics could not be more different from each other, the only thing Brotherhood and Nefta Football Club have in common are the English subtitles. (You can catch both movies and all the other Oscar-nominated short films at Riverdale 10 this weekend.)

Joobeur, a dual citizen of Tunisia and the United States, recalls that Tunisia itself and the people who lived there inspired Brotherhood. During a 2016 road trip, she encountered a trio of siblings (Malek Mechergui, Chaker Mechergui and Rayene Mechergui) who became her leading men.

"I met them on the side of the road," she says from Montreal. "I was doing a road trip. I just saw the two older brothers on the side of the road with their sheep, and I was immediately captivated by their faces and by the landscape. So the project actually started with them, and I wrote the script with them in mind to play the roles (which have the same first names). It was kind of like the opposite of how ... you write the script and then you cast for the film."

In Brotherhood, Malek returns home to rural Tunisia after having briefly volunteered for the Islamic State. His strict father, Mohamed (Mohamed Grayaâ) is understandably furious. Most Arabs view the terrorist organization with the same contempt that most Christians would feel for a homicidal version of Westboro Baptist Church. Mohamed and the filmmaker refer to them as "Daesh," which is a sort of Arabic acronym like their English name. It's similar to "daes," which means someone who tramples things underfoot.

From watching Brotherhood, you don't have to speak the language to know it's not a compliment.

"I feel that point of view is rarely given in the western media," Joobeur says. "Any Tunisian you'd speak with, 99%, would say they have a deep dislike for what [ISIS] represents, and they know the damage they're doing to the Arab and Muslim world. But I think a lot of people in Europe or North America don't realize that. It was powerful to see it with an audience and people would say, 'I can't believe the father character held that point of view.'"

In a brisk 24 minutes, the film explores what has driven people like Malek to join and why he has defected. The Syrian regime has committed numerous human rights violations, but Daesh is responsible for countless deaths.

"It's complex," she says. "But at the core, I wanted to kind of project is that the reason Malek is influenced to make this decision is to be seen or to feel empowered or to belong. What Daesh did in a very alarming way, especially at the very beginning, was certain brotherhood. 'If you join us, you will belong, and you'll be part of something important.'"

"That kind of propaganda is used for every type of extreme group that we see. That's what I wanted to underline: What could cause a naïve young man to make this decision."

Just as terror groups can come from any denomination, so can dinner table arguments. A confrontation between Mohamed and Malek in front of the former's wife (Salha Nasraoui) might sound eerily familiar to anyone who has ever made the mistake of bringing up religion or politics over a meal.

Joobeur, who has lived for the last 11 years in Canada says, "I wanted to show the proximity between a family in Tunisia, with say, a family in America. I grew up between the U.S. and Tunisia, so I felt like I really wanted to show how similar the family dynamics are."

Surprisingly, the landscape itself looks somewhat similar to grasslands here in the States. In the region where Brotherhood was filmed, the land looks nothing like the dry Sahara.

"With the road trip from 2016, it was the first time I'd traveled to the north. You can find pine forests and snow in the winter. You have the ocean. You have these rolling green hills that look like Ireland or Scotland. That's why I loved shooting in the region," Joobeur says.

If Tunisia was the first and only location where Joobeur considered filming, French filmmaker Yves Piat made his comedy Nefta Football Club there for other reasons.

Speaking by Skype from a Starbucks in Los Angeles, he says "At the beginning, I wanted to film in the Moroccan desert. That's where the script began. After I had done all my scouting in Morocco and I had informed the authorities, we eventually decided to shoot in Tunisia barely a month before shooting, primarily for economic reasons. The Nefta region was ideal because it was still on the Algerian border, and the landscapes were not too far apart."

The story involves two brothers, Mohamed (Eltayef Dhaoui) and the 8-year-old Abdallah (Mohamed Ali Ayari), discovering a literal drug mule (actually a donkey) in the hills near the border. Mohamed knows the white powder in the donkey's saddle is worth quite a bit of cash, but his little brother thinks the plastic bags have laundry detergent in them.

Actually, Abdallah couldn't care less what's in the bags because he'd rather be playing soccer with his pals. What the two don't realize is that the owners of the donkey (Lyès Salem and Hichem Mesbah) might not take kindly to the lads "borrowing" their contraband.

According to the Internet Movie Database, Nefta Football Club has won 22 awards in addition to the Oscar nomination. The movie pulls off a remarkable balancing act because the tale involves drugs and potential child endangerment but remains funny throughout.

When asked how he achieved the proper tone for the film, Piat pauses and says, "It's not easy to answer this question. You don't write the story. It's a story that wants to be written. The message came from the Universe, not me. When you write, you are just a messenger. The artistic process is very powerful."

Nonetheless, his own experiences did work their way into his tale of mules and mischief. "The brother of a friend of mine, who is in jail, was a smuggler. He told me that smugglers use donkeys, but they are called with a whistle, not as in the film with music. I brought the music into the movie because I thought it was funny to have this misunderstanding," Piat says.

Actually, this donkey has a thing for the music of Adele.

When asked if the British diva knew her song was part of an Oscar-nominated film, Piat sheepishly said, "No, but I would like it if she watched the movie. It would be huge, very cool. All directors dream of being nominated for an Oscar. It's the event we have all dreamed of from a very young age."

Whereas Joobeur's movie examines her own culture, Piat, who spoke to me in English, directed his actors through a girl who acted as his translator. "Obviously, it's difficult. We often say not to shoot with children or animals, so I told myself it was not enough, so we shot in Arabic and in the desert," he says.

If subtitles frustrate you, Piat's film is remarkably easy to understand even if you don't speak a word of Arabic. The images and performances tell the entire story. "I come from animated film, so you have to make a film without dialogue, so that's why you can understand the movie."

Both films feature some technical feats that would be impressive in an expensive feature. Nefta Football Club ends with an impressive crane shot, and the climax of Brotherhood deliberately features sound that doesn't match the images.

The two filmmakers have different plans for what they might do after Feb. 9 has passed. Joobeur is working on expanding the themes in Brotherhood, while Piat would like to make a thriller.

"It's interesting because I've had a lot of different previous nominees give me their advice," she says. "I think there's no clear formula. I'm going into it without high expectations and will just be open to learning more about the American industry and how it works." She appears to have learned quite a bit already. Her film has earned 20 festival awards in addition to the nomination.

"Today, it is Hollywood that is the big boss," Piat adds. "Los Angeles inspires me a lot, and there is a script that I wrote that I would like to shoot in Los Angeles." 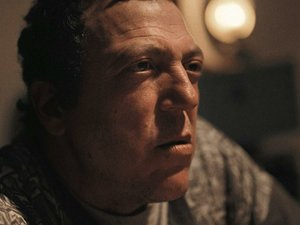 Tunisian patriarch Mohamed (Mohamed Grayaâ) has to deal with his eldest son, who has returned from Syria where he fought for the Islamic State, in Meryam Joobeur’s Oscar-nominated short lm Brotherhood.