Adjustments made to Slow Streets program in Fayetteville 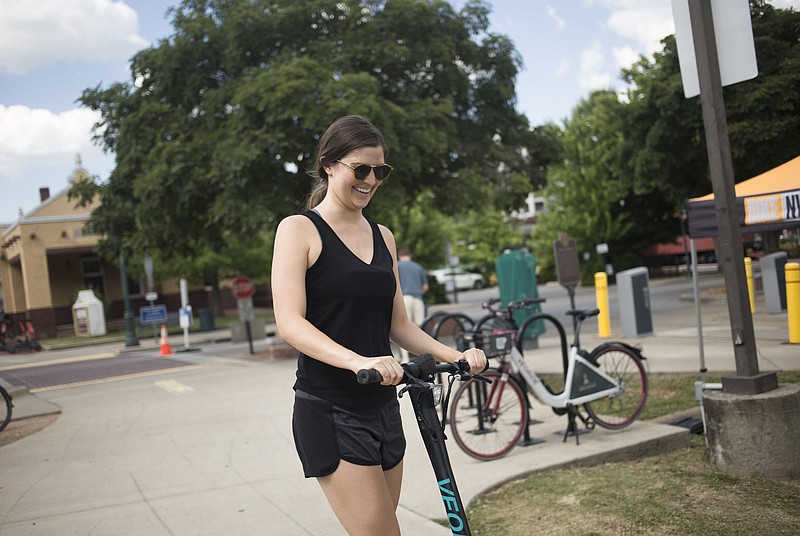 Celina Bandarth rides a scooter, Sunday, June 14, 2020 along Dickson St. in Fayetteville. BikeNWA and Fayetteville patterned to close several streets to thru traffic so people can play, bike and walk in the streets. Check out nwaonline.com/200615Daily/ for today's photo gallery. (NWA Democrat-Gazette/Charlie Kaijo)

FAYETTEVILLE -- A couple of adjustments to the Slow Streets program seem to have gone over well with businesses and residents, the city's Transportation Committee heard Tuesday.

The program involves closing certain streets to through traffic for cars, enabling pedestrians and bicyclists more freedom to use the road for recreation or exercise during the pandemic. Cars can still pass slowly to get to homes or businesses.

Trail use has increased, and opening the streets to pedestrians is meant to relieve some of the congestion and allow more room for socially distant activity, city officials have said.

BikeNWA partnered with the city to manage the program. Slow streets were set up near Wilson Park on May 26. A looped route sprouting from there was implemented on Sundays beginning June 14. The route roughly goes north of Wilson Park, east to College Avenue to the Washington-Willow neighborhood, south to Dickson Street and to the downtown square, connecting to the Razorback Greenway on the west side heading back north.

Signs are placed along the route on Sunday notifying drivers. Initially, the signs stayed up from 10 a.m. to 6 p.m. The hours were adjusted to noon to 8 p.m. to coincide with cooler evening hours, said Dane Eifling, the city's mobility coordinator.

Feedback from businesses also prompted new signs on Dickson Street. The original signs told drivers the road was closed to through traffic or was for business traffic only. The new signs are brighter in color and say, "Open for all business customers/Open to all bikes & pedestrians."

"They felt it was turning away some customers who were not familiar with the program and didn't feel like they were welcome to come onto the street with their car to go to a restaurant or bar," he said.

New signs went up after the first week of the program, Eifling said. The move seems to have satisfied downtown business owners, he said.

BikeNWA plans to install video counters on the Razorback Greenway at Dickson Street to see how many people turn off from the trail and head to Dickson on foot or pedal, Executive Director Paxton Roberts said. The organization will continue to talk with business owners, he said.

"We're continually monitoring feedback and would like to maintain those communication lines so we can keep making adjustments as needed," Roberts said. "We'd love to see these expand through the city in other places as well, especially from an equity component."

Similar signs are planned to replace ones at Wilson Park, which say "Park and local traffic only." Feedback indicated drivers were getting the impression the neighborhood was getting its own private drive, Eifling said.

Overall, feedback on the program has been mixed. About 25 respondents so far have taken surveys on the city's public input website, Speak Up Fayetteville. Positive and negative comments were split about halfway, Eifling said.

Council Member Matthew Petty, who leads the committee, commended BikeNWA for its quick response to resident and business owner feedback. He said he wanted to see how impressions on the program change over time.

"I'm really optimistic the longer we do this, as long as we continue to be responsive and make these changes like we've been making, that the popularity of the program will grow quite a bit," he said.

The program is intended to happen every Sunday until Aug. 30. BikeNWA also is managing the same program in downtown Bentonville.

To provide input on the city’s Slow Streets program, go to: