Visits on pause at 59 care facilities in state 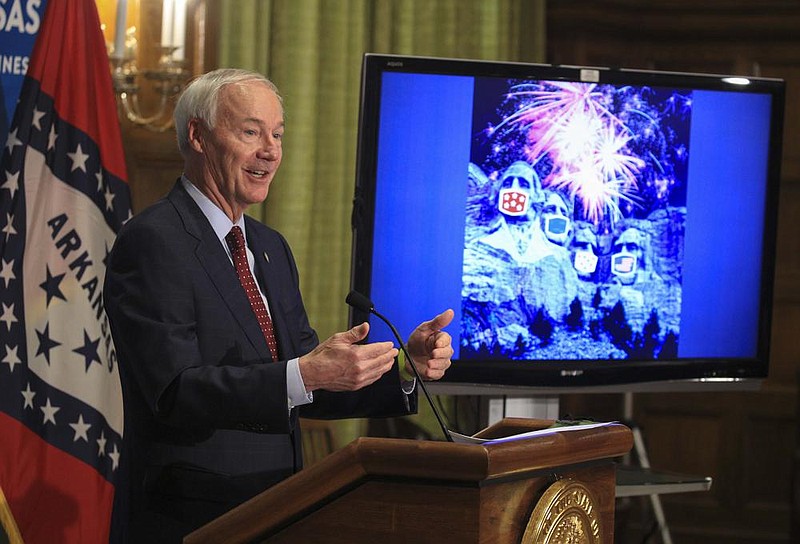 Gov. Asa Hutchinson speaks Tuesday June 30, 2020 at the state Capitol in Little Rock during his daily covid-19 briefing about the importance of wearing a mask this holiday weekend as he shows an image of the presidents at Mt. Rushmore with wearing masks. See more photos at arkansasonline.com/71governor/. (Arkansas Democrat-Gazette/Staton Breidenthal)

The return to allowing visitors will be delayed for at least 59 Arkansas nursing homes and other long-term-care facilities where a resident or worker tested positive last month for the coronavirus, state officials said Tuesday.

In a change from rules that were announced earlier, state Department of Health Secretary Nate Smith said Arkansas will follow federal guidelines and prohibit visitors at nursing homes where a resident or worker has tested positive in the past 28 days.

[Video not showing up above? Click here to watch » https://www.youtube.com/watch?v=XBg_0-YL9wg]

For other facilities, visits are allowed to resume starting today, under certain conditions.

"I think a majority of the nursing homes will be subject to that reopening, but there will be a significant number that will not meet the criteria because they've had a positive test," Gov. Asa Hutchinson said.

Hutchinson announced the change as the state's count of coronavirus cases increased by 520, to 20,777.

The Health Department's count of deaths from the virus increased by five, to 270, while the number of patients hospitalized with the virus fell by 10, to 290.

Sixty-seven of the patients were on ventilators, up from 63 a day earlier.

On the day that Hutchinson said he would revisit the state's prohibition on team practice and competition for "close contact" sports, such as basketball, wrestling and football, the Republican governor said the coronavirus is spreading too quickly to lift the restriction.

"I'm anxious to play," said Hutchinson, who regularly played basketball before the pandemic.

"We're continuing to look at that, but because we have it on pause right now, until we get these cases down, I don't expect the movement to take place for going to a Phase 3 or for opening it up to those additional contact sports."

Hutchinson on May 21 announced rules allowing team practice and competition for "limited contact" sports, such as baseball, track and gymnastics, to resume on June 1 and said he would revisit the restriction on close contact sports Tuesday.

The state has been testing all residents and staff members at nursing homes, assisted-living facilities, residential care facilities and care facilities for the developmentally disabled in preparation for the resumption of visitation.

Visitation to such facilities stopped after a directive by the Health Department on March 13, just two days after the state announced the first confirmed case of the coronavirus.

Smith said testing had been completed at most of the 413 facilities, and the department had received results on 326 of them.

Of the more than 40,000 residents and workers who were tested last month, about 250 had been found to be positive as of Tuesday, Health Department spokesman Gavin Lesnick said.

The Health Department's rules would have allowed visits to occur at facilities where one or two residents or staff members have tested positive within the previous seven days, although not with residents who have tested positive or who had been in "prolonged close contact" with a resident known to be infected.

In facilities where three to five residents or staff members have tested positive, the Health Department's rules called for visits to be suspended for 14 days.

Smith said the department decided to adopt the federal Centers for Medicare and Medicaid Services' guidelines, released last week, "just to be consistent with our federal colleagues and also out of an abundance of caution."

"I know that that is going to exclude some of the nursing homes from allowing visitors that had hoped to, and they'll just have to wait longer," Smith said.

"It definitely puts a burden on them and the ones that were looking forward to reopening, but we have to trust that CMS did that for a reason and need to follow that," she said.

She added that, even some facilities where no residents or staff members have tested positive may not be ready to open to visitors today.

"Every facility is on a little bit different path here," Bunch said. "They've got to maintain the safety and well being of those people that we serve."

She recommended that people who want to visit contact the facility to find out their policy and schedule the visit if visits are being allowed.

"People won't just be able to show up like they did before," she said.

Martha Deaver, president of Arkansas Advocates for Nursing Home Residents, called it "outrageous" to delay visits at facilities where just one person has tested positive.

"Of course, there's going to be devastated nursing home residents and family members, what can I say," she said.

She contended that visits could safely occur if the right precautions were taken and that the mental toll of residents' isolation is a bigger threat than the virus.

"It can totally affect their entire well-being, and so many of them don't really understand what's going on because of dementia or Alzheimer's," she said. "All they know is that they don't see their loved ones."

Smith said a team from the U.S. Centers for Disease Control and Prevention that has been studying the spread of the virus among Hispanics and the Marshallese in Northwest Arkansas has started preparing a report that he hopes will be complete within the next week.

Meanwhile, he said a second CDC team has arrived in the state to study transmission of the virus in nursing homes.

"Arkansas has been selected as a state to do that, I think, because of our very good partnership with the nursing homes," Smith said. "Hopefully, we will learn additional information about how covid-19 spreads in nursing homes, and that will be information that will help us in our response, but also will help other states as well."

The number of Arkansas nursing home and assisted-living facility residents who have died from the virus increased by two Tuesday, to 101, according to Health Department reports.

One of the latest deaths was at the Community Compassion Center of Magnolia, raising the total number of virus deaths there to four, according to the reports.

The other was the second reported at The Villages of General Baptist Health Care West in Pine Bluff.

Five new facilities were added to a list of those where at least one resident or worker has tested positive, raising the total number of such facilities to 145.

At his nearly daily news conference on the pandemic, Hutchinson continued to defend the lack of a statewide mandate on masks, saying he's seen "a significant increase" in Arkansans who are wearing them.

He attributed that to "our strategy of education, of leadership, of encouragement and showing the difference that it makes."

New York, which instituted a mask requirement in April, reported just 524 new cases on Tuesday even though its population is more than six times bigger than Arkansas'.

But Hutchinson noted that cases are on the rise in California, which also has a mask requirement, and that most states don't have such a requirement.

He also noted that one Arkansas county, Calhoun, still didn't have any covid-19 cases as of Tuesday and that several counties have just one active case, meaning the person tested positive and hasn't recovered.

Hutchinson has discouraged cities from adopting their own mask ordinances, however, saying he doesn't want a "hodgepodge" of different rules.

"We'll consider anything that is supported by good science and information, and that we believe will work," he said.

Smith said at least 18 of the cases added to the state's total Tuesday were among prison or jail inmates.

But he said about 35 of the new cases likely stemmed from an outbreak at the Wrightsville Unit but hadn't been classified as prison cases as of Tuesday.

Department of Corrections spokesman Cindy Murphy said 81 inmates and one staff member at the prison had tested positive as of Tuesday.

Lesnick said 39 cases as of Tuesday had been linked to First Pentecostal Church in North Little Rock, up from 34 on Friday.

Cases increased on Tuesday by 152 in Washington County and 118 in Pulaski County, where Smith said 44% of the cases were Little Rock residents.

The new cases also included 33 in Benton County, 23 in Faulkner County and 21 in Yell County.

Crawford and Desha counties each had their first death from the virus, according to a state website.

In Crittenden County, the count of virus deaths increased by one, to 12.