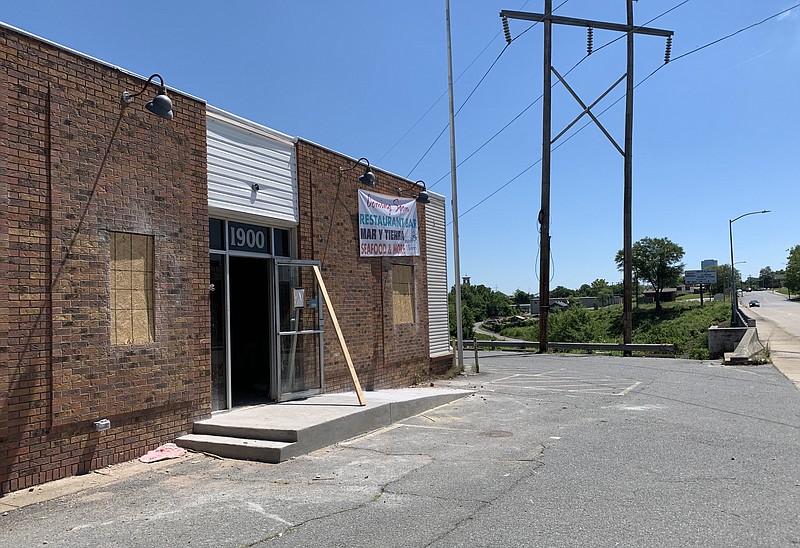 Construction, which stopped in March as the covid-19 crisis hit, has resumed on Henrietta's, going into the former Andina's space at 433 E. Third St., Little Rock.

Co-owner and creative director Leila King says she put the development, physical design and concept of Henrietta's on hold to keep the focus on @ The Corner, 201 E. Markham St., Little Rock, which she owns and operates with her sisters, Helen Grace King and the chef, Kamiya Merrick.

She has always maintained that Henrietta's will be significantly different from @ the Corner, though it will also serve breakfast, lunch and possibly early dinner, but the concept, which was still in development in March, is once again a work in progress. She envisions it, however, as being "health-centric," with a menu and cocktail program aimed at promoting a "healthy lifestyle"; King says she's taking inspiration from the Mediterranean diet. So it will likely include organic and plant-inspired items, including couscous and quinoa, and sustainable main dishes such as wild-caught salmon from Washington State. The menu will also be integral to the interior design and will take shape as it does, she says, and that's a work in progress too.

She doesn't have a firm timeline to get Henrietta's open; the plumbing is done and the completion of the electrical work awaits only the installation of lighting fixtures. Once the kitchen is in place, she says, "we can start pushing out food, even if it's via curbside," possibly sometime this fall.

Meanwhile, @ the Corner has managed to keep its "head" above water as a curbside-pickup-only operation since mid-March, and Merrick continues to change up the menu on a weekly basis (check out the current one at the Facebook page, facebook.com/thecornerlr). And they've started doing pop-up meals at other establishments, including one last week at Stone's Throw Brewing's Stifft Station taproom.

Aug. 5 is the target date for the opening of Restaurant Bar Mar y Tierra, in the eastern half of the brick building at 1900 W. Third St., Little Rock, near the state Capitol, says owner Gracie Soto. She says the menu, as the name indicates, will consist primarily of steak and seafood; tentative hours are 11 a.m.-10 p.m. daily. She's planning to have music, including Latin karaoke on the weekends. The space has housed many eating and drinking establishments, the latest of which was Satchemo's Bar and Grill; previous occupants include, not necessarily in this order, Twelve Modern Lounge, Star Bar, Cove Ultra Lounge, Special T's Sub's & Catering, Mr. Nelson's BBQ , Blues & Entertainment and The Italian Couple. The west half, currently vacant, formerly housed Warehouse Liquor.

Sekisui, which announced in a June 8 Facebook post that it was shut down at 219 N. Shackleford Road, Little Rock, for a move west to 14524 Cantrell Road, reopened June 19 ⁠— in less than two weeks ⁠— in the new location, dining room and all. The menu includes appetizers, sushi, hibachi plates and Japanese, Korean, Chinese and Thai entrees. As a grand opening special, they're offering 50% off all pickup sushi orders. Hours are 11 a.m.-9:30 p.m. daily. The phone number remains (501) 221-7070; the website, sekisuilittlerock.com; and the Facebook page, facebook.com/sekisuiar. The revolving door space that has previously housed Infusion Bar & Lounge, Asian Bar & Grill, Gina's Sushi & Grill, the final resting place of Sai Gon, two versions of The Main Cheese, a brief incarnation of Whole Hog Cafe and an even briefer second outlet for Hawgz Blues Cafe.

Flint Flenoy, who owns and operates Flint's Just Like Mom's, currently dormant at 124 W. Capitol Ave., Little Rock, has opened Flint's at the Regions in the former Sack-It Grill space on the ground floor of the Regions Building, 400 W. Capitol Ave., Little Rock. Hours are 6:45-10:30 a.m. for breakfast and 10:45 a.m.-3 p.m. for lunch. The phone number is (501) 500-1300. Flenoy says he has also acquired control of the rest of the former Franke's space but has not yet said what he plans to do with it.

Two closures to report, one immediate, one pending: Tony Poe said Wednesday he has permanently closed Atlas Bar, 1224 Main St., Little Rock. And Paninis & Company, in the Midtowne Shopping Center, 207 N. University Ave., Little Rock, announced in a Tuesday Facebook post (facebook.com/juicebarlittlerock) that it will "shut our doors permanently on July 10 at 2:30 p.m.," citing "the impact of the coronavirus on our sales and our inability to renegotiate our lease."

Exposure to covid-19 had closed two almost-neighbor, higher-end west Little Rock restaurants this past week. Per a post on its Facebook pages, Petit & Keet, 1620 Market St., said it would close, initially through Tuesday but subsequently extending the closure to July 6, "out of an abundance of caution for our employees and patrons," after an employee tested positive after traveling out of state. Extending the closure will allow testing to continue for the remainder of the staff and a professional cleaning crew has come in "to fog and sanitize the restaurant from top to bottom." The phone number there is (501) 319-7675.

Meanwhile, The Pantry, 11401 N. Rodney Parham Road, which had closed so the rest of the employees could be tested after a staff member had been exposed to covid-19, reopened Tuesday, after announcing in a Monday Facebook post that "we have received negative results from all employees who have worked in the last 14 days." The dining room remains closed and they're continuing to do curbside takeout service only; "we will assess opening the dining room after the holiday weekend," the post continues." The phone number is (501) 353-1875.

And as of Tuesday, Mike's Place, 808 Front St., Conway, which just reopened June 1, has shut its dining room and gone to to-go/curbside-only service, 4-8 p.m. daily, until further notice. Owner and namesake Mike Coats posted Monday on Facebook that "we have had an employee contacted from a local venue due to a positive case. All guests and employees have been contacted by local health dept. that had been exposed." The phone number is (501) 269-6453.

Maddie's Place, 1615 Rebsamen Park Road, Little Rock, is continuing to put off opening, says co-owner/chef Brian Deloney: "We are waiting, at least, until mid-July. With all the new cases, we didn't think it was the right time. We are just waiting until it seems safe to open." The phone number there is (501) 660-4040; the website is maddiesplacelr.com and the Facebook page, facebook.com/maddiesplacelr.

Has a restaurant opened ⁠— or closed ⁠— near you in the last week or so? Does your favorite eatery have a new menu? Is there a new chef in charge? Drop us a line. Send email to: