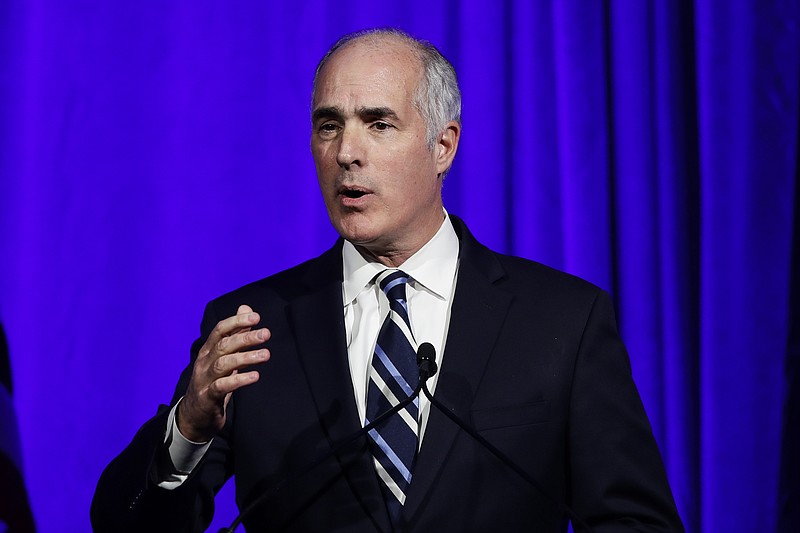 FILE - In this Nov. 1, 2019, file photo Sen. Bob Casey, D-Pa., speaks during a Pennsylvania Democratic Party fundraiser in Philadelphia. The Trump administration was slow to comprehend the scale of COVID-19's impact on nursing homes and a disjointed federal response has only compounded the devastating toll, according to a report from Senate Democrats. “Unfortunately for the nation, it is a chronicle of deadly delay, and a lack of urgency, and the lack of a strategy,” said Casey, ranking Democrat on the Aging Committee. (AP Photo/Matt Rourke, File)

WASHINGTON -- The Trump administration was slow to comprehend the scale of covid-19's impact on nursing homes, and a disjointed federal response has only compounded the toll, according to a report from Senate Democrats.

Wednesday's report finds that a lack of coordination among government agencies hindered access to coronavirus testing and protective equipment, among other problems.

"Unfortunately for the nation, it is a chronicle of deadly delay, and a lack of urgency, and the lack of a strategy," said Sen. Bob Casey, D-Pa., ranking Democrat on the Aging Committee. "What we see in the way the administration handled this reflects the administration's failure in responding to the pandemic generally."

The head of the Centers for Medicare and Medicaid Services, the lead federal agency on nursing homes, defended the administration's record. "The report is disingenuous," said Seema Verma. "I think the agency has had a historic and unprecedented response and should be commended for its efforts."

Verma cited numerous agency alerts and guidance documents directed to nursing homes. The Centers for Medicare and Medicaid Services also says it has redoubled emphasis on inspections for infection control.

Investigative agencies like the Government Accountability Office, and the Health and Human Services inspector general are also focusing on nursing homes, which house a tiny share of the population but represent a large proportion of covid-19 deaths.

Even now, four months after the first nursing home outbreak was reported in Kirkland, Wash., there's no consensus estimate on the extent of suffering and death.

Statistics reported by nursing homes to the federal government as of June 14 show that nearly 30,800 residents have died, according to an Associated Press analysis of the government numbers.

The AP's own running tally shows that nationwide more than 55,000 residents and staff members have died from coronavirus outbreaks at nursing homes and other long-term-care facilities.

Both counts show a disproportionate share of the total of more than 128,000 deaths nationwide.

The report, prepared by the Democratic Senate staff, found that:

• It took the administration several months -- until early May -- to require that nursing homes report data on coronavirus cases and deaths to the Centers for Disease Control and Prevention and the Centers for Medicare and Medicaid Services.

The data remains incomplete, the report says, because it lacks demographic details and may not include cases early in the pandemic. Verma said such data collection efforts can take years to set up, and that the Centers for Medicare and Medicaid Services may well ask for demographic details.

• Urgent recommendations from the White House and guidance from the Centers for Medicare and Medicaid Services to test nursing home residents and staff members did not translate to uniform results on the ground because there was no system in place to guarantee the availability of tests and supplies.

Verma said the Centers for Medicare and Medicaid Services tried to help by changing its rules to allow labs to go into nursing homes and collect samples. But a nursing home industry survey released Wednesday found that nearly 9 in 10 facilities say it's taking two or more days to get test results back from labs. For about one-fourth of nursing homes and assisted living facilities, it was five days or more.

• A Federal Emergency Management Agency initiative launched at the end of April to distribute supplies to nursing homes involved unnecessary delays, delivered faulty and unusable personal protective equipment to some locations, and initially left other facilities off the distribution list though they appeared to be eligible.

• Although Congress allocated $175 billion in emergency funding for health care facilities and service providers, nursing homes appear to have gotten a relatively small share, delivered in recent weeks. An initial $4.9 billion was provided in late May, and more money was sent out since then, in a distribution geared to facilities serving Medicaid patients.

The report largely avoids criticism of the nursing home industry, which has been cited for poor infection control practices and chronic staffing shortages. Staff members often work at multiple facilities and may have unwittingly contributed to the spread of the virus, since people can be contagious without any noticeable symptoms. Once inside a nursing home, the coronavirus encounters an ideal environment in which to spread.

Defending the administration, Republican lawmakers suggest at least part of the blame lies with several Democratic governors who required nursing homes in their states to accept recovering coronavirus patients.

The Centers for Medicare and Medicaid Services has impaneled a 25-member commission to analyze what happened in nursing homes, and make recommendations to better protect elderly and frail residents.

The report from Senate Democrats also includes some recommendations, among them promoting strategies that have worked to allow nursing homes to safely care for coronavirus patients, accelerating the ongoing shift to home- and community-based care, and raising the pay and status of nursing home staffs.

"I'm not saying that government can wave a magic wand and eliminate the threat, because the context of a nursing home is challenging," Casey said. But "there's no excuse for having this many deaths under any circumstances."

Information for this article was contributed by Meghan Hoyer and Randy Herschaft of The Associated Press. 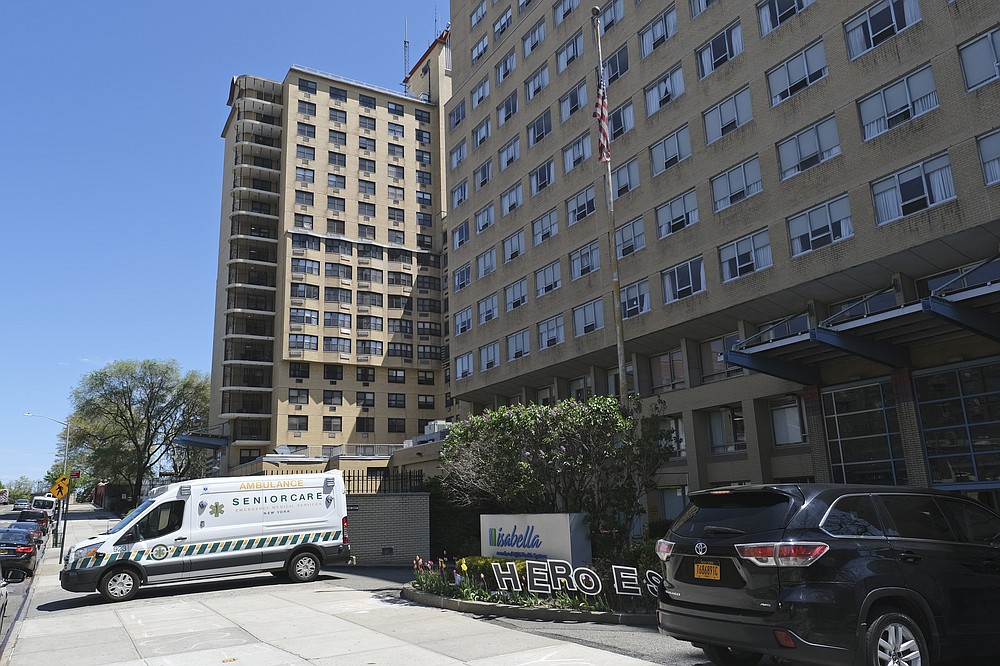 FILE - In this May 5, 2020, file photo an ambulance leaves the Isabella Center in New York. A report from Senate Democrats finds that the Trump administration was slow to comprehend the scale of COVID-19's impact on nursing homes and a disjointed federal response only compounded the devastating toll. (AP Photo/Seth Wenig, File) 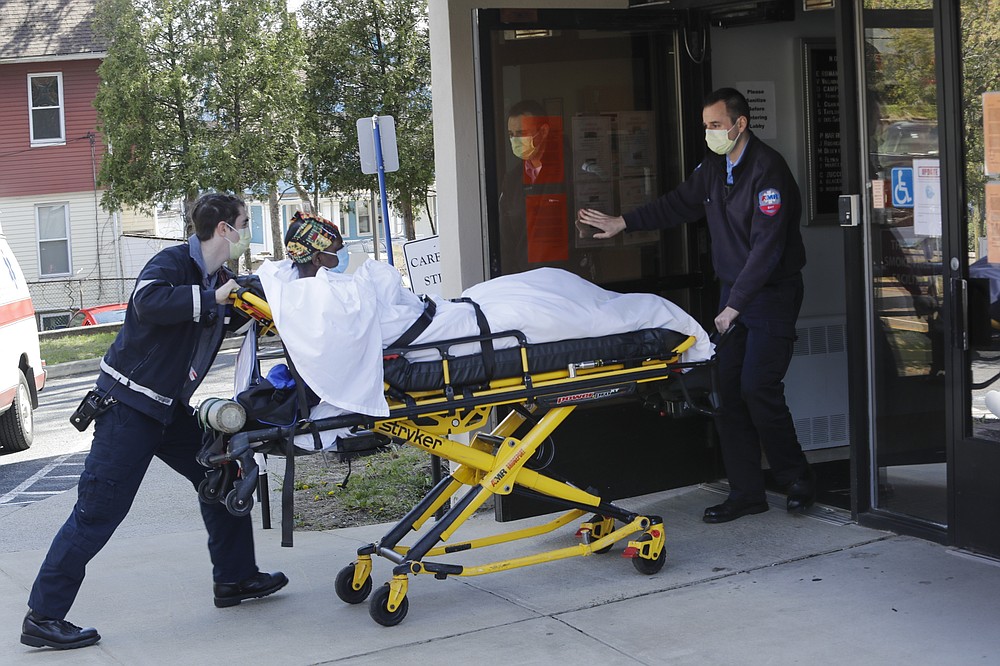 FILE - In this April 22, 2020, file photo medical workers bring a patient to the Northbridge Health Care Center in Bridgeport, Conn. A report from Senate Democrats finds that the Trump administration was slow to comprehend the scale of COVID-19's impact on nursing homes and a disjointed federal response only compounded the devastating toll. (AP Photo/Frank Franklin II)
ADVERTISEMENT