Rutledge running for governor in '22 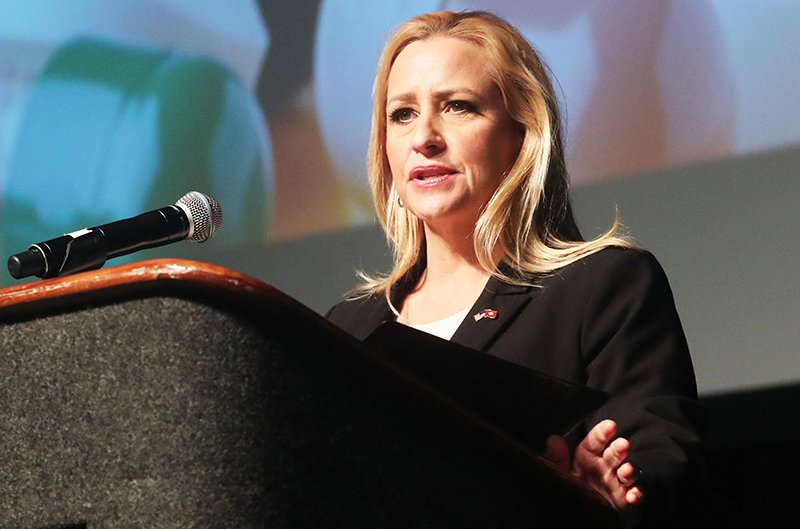 Attorney General Leslie Rutledge said Wednesday that she is running for the Republican nomination for governor in 2022.

"After months of people asking me when I was going to announce my intentions and my decision, I wanted to get out front because the future of Arkansas is at stake," she said in an interview with the Arkansas Democrat-Gazette.

"As we have gone through these last several months through this pandemic, we have seen the need and Gov. [Asa] Hutchinson has underlined and underscored the importance of having a trusted leader at the head of our state," Rutledge said.

Rutledge of Maumelle, who has been the state's attorney general since 2015, is the second Republican to signal an intention to seek the party's gubernatorial nomination in 2022.

In August 2019, Lt. Gov. Tim Griffin of Little Rock confirmed he's running for the GOP nomination for governor in two years. Griffin has been lieutenant governor since 2015 and was the state's 2nd District congressman from 2011 until 2015.

Sanders is the daughter of former Gov. Mike Huckabee, who served from 1996 until 2007.

Hendren is the nephew of Hutchinson, who has been governor since 2015.

Hutchinson, now in his second four-year term, is barred from seeking re-election under the state's term limits constitutional amendment.

No Democratic candidates have signaled their intention to run for governor in 2022.

She said she would roll out her full campaign plan and policy platform during the next several months.

"At this time, I wanted to make certain that Arkansans are aware of my candidacy and intention to run and to be the next governor of Arkansas," Rutledge said.

Griffin said Wednesday night in a written statement, "I welcome Leslie to the Governor's race and will continue to take my conservative message of growing jobs through lower taxes and fighting wasteful spending to all 75 counties in Arkansas."

Asked whether she expects Hendren and Sanders to run, Rutledge said, "I don't have a crystal ball. That will be a question for the senator and/or my friend Sarah to answer ...

"I think it's important that whoever decides to enter the race that we do so with utmost respect for one another and that we conduct this campaign as professionals and that one of us will be the next governor of the state of Arkansas," she said.

Sanders on Wednesday night declined to comment on her plans.

Hendren said Wednesday night that he's still considering running in 2022 and he's not sure when he'll make a final decision.

Hendren said it's not any surprise that Rutledge and Griffin are running.

Asked why she would be a better governor than Griffin, Rutledge said, "I think it is important that we look at the record of accomplishment.

"As attorney general, I have been engaged in everything from defending our pro-life statutes that have been passed to defending the governor's executive orders or his decision to defund Planned Parenthood," she said.

"We have held criminals accountable, ensuring justice for victims. During the first four years of my term, we had more Medicaid fraud convictions than in the 16 years prior to that, so responsibly insuring that taxpayer monies are being protected and not being taken advantage of."

Several state lawmakers have questioned the attorney general's office spending $1.7 million on television and radio ads in the fiscal year that ended Tuesday; the money came from settlements of lawsuits.

The attorney general office's records show that the previous highest amount that the office spent on TV and radio ads since at least fiscal 2008 was the $459,200 spent in fiscal 2014 when Democrat Dustin McDaniel was the attorney general and after he dropped out of the 2014 governor's race in January 2013.

Asked if the attorney general's office ad campaign was aimed at promoting her for governor, Rutledge said Wednesday, "Absolutely not.

"I have been working hard for 5½ years and I have traveled all 75 counties each year to meet the people personally and in round-table meetings," she said. "The office goes to all 75 counties. Whether it is a lawsuit that we are filing against a bad business, a drug company, a used car salesman or holding a criminal accountable for unspeakable acts that they have committed against a child, all of those things are done as that is my job and it's my responsibility, and I am honored to do it."

Asked if she would push as governor to eliminate Hutchinson's Arkansas Works version of Medicaid expansion, Rutledge said, "I will be announcing a campaign platform and rolling that out over the next several months.

"With regard to Arkansas Works and the Affordable Care Act, I do believe it is important for Arkansans to know that I will always fight to ensure that those with preexisting conditions are taken care of," said Rutledge.

The attorney general has opposed the federal Affordable Care Act, which gives states the option of enacting Medicaid expansion programs such as Arkansas Works. She also has urged the U.S. Supreme Court to declare the federal law unconstitutional.

"It is time for Congress to have something in place in the event that the Supreme Court agrees that the Affordable Care Act is not legally sound and that it must replaced, so I encourage our members of Congress to work together, to cross the aisle to put something in place for Americans and to protect those with preexisting conditions," she said.