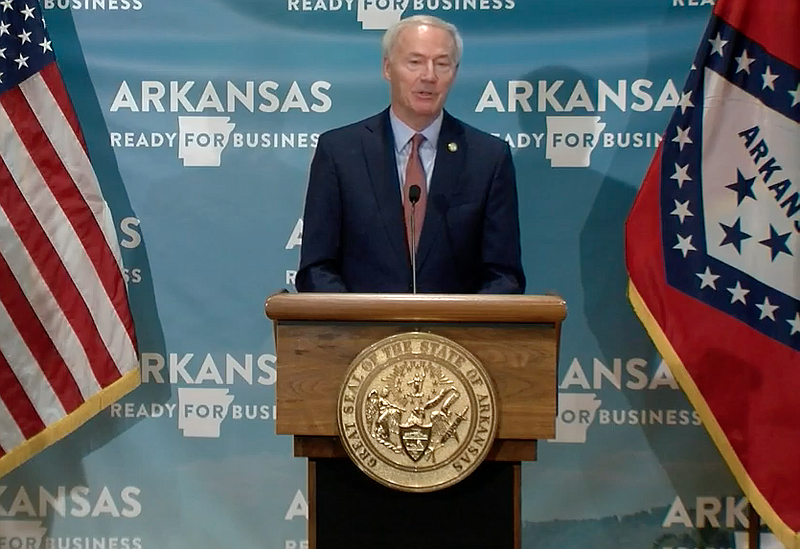 Arkansas Gov. Asa Hutchinson speaks to reporters at the state Capitol in Little Rock on Tuesday in this still of video provided by the governor's office.

All Arkansans will be able to cite concerns about covid-19 as an excuse to vote by absentee ballot in the November elections, Gov. Asa Hutchinson announced Thursday.

The governor, who had not previously committed to expanding the use of mail-in or absentee ballots during the election, made the announcement alongside the chairs of the state’s Republican and Democratic parties, as well as Secretary of State John Thurston.

Arkansas law allows voters to request an absentee ballot if they will be "unavoidably absent" on Election Day or if they have an illness or physical disability. Thurston said last week that he believed the law will allow voters to choose whether or not to vote absentee during the pandemic, an interpretation that Hutchinson said he concurred with.

“They just simply have a concern, a fear of going to the polling place because of the covid-19, that’s enough of a reason,” to vote absentee, Hutchinson said.

All absentee ballots must be returned by 7 p.m. on Election Day to be counted, Thurston said.

The new absentee voting requirements are different from the universal vote-by-mail system already in place in some states, which send a ballot by mail to every registered voter. Voters in Arkansas must still request an absentee ballot.

An analysis of vote-by-mail in three states by the “The Washington Post” found that instances of voter fraud in mailed-in ballots represented .0025 percent of votes cast.

Hutchinson said that allowing voters to used covid-19 as an excuse to vote absentee would be the “foundation” of this year’s elections in Arkansas.

He said other measures to protect voters, such as expanding early voting or opening polling sites in larger venues, could be considered closer to Election Day.

Arkansas recorded 878 new cases of covid-19 on Thursday, Gov. Asa Hutchinson said, the highest daily increase since the pandemic began. The jump came on the heels of a string of days where the number of new cases daily appeared to be trending downward.

Department of Health Secretary Dr. Nate Smith said at least 150 of the new cases are from correctional facilities. He said more are likely from such facilities but not yet classified as such.

Two more Arkansans died as a result of the virus, bringing the toll to 279, Hutchinson said. According to Smith, 535 additional people have recovered.

The number of active cases as of Thursday was 6,098.

Hot Spring County saw the highest number of new cases, 151. Hutchinson said many can be attributed to the Ouachita River Unit state prison in Malvern.

Hutchinson said it remains to be seen if the jump is part of an upward trend or if new cases will return to the lower level seen in the last few days.

The total number of coronavirus cases reported in Arkansas remained at 21,197 Thursday morning, according to a state website. The death toll remained at 277.

[Video not showing up above? Click here to view » https://www.youtube.com/watch?v=WLAgaptRYFo]