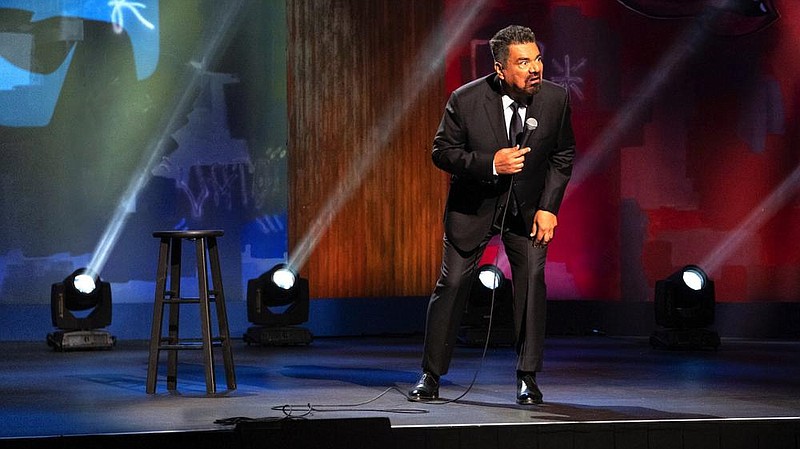 George Lopez, who our critic knew primarily as a family-friendly TV sitcom star, returns to his stand-up roots in the Netflix original comedy special “We’ll Do It For Half.”

I was trying to decide what to review this week when I saw George Lopez had a new comedy special drop on Tuesday. Having enjoyed the last few Netflix comedy specials from Patton Oswalt and Hannah Gadsby, I figured I'd check out "We'll Do It For Half."

George Lopez is a name I'm just a little familiar with. I caught a few episodes of his television series "George Lopez" on ABC. It was decent, and he's a funny man. Most recently he had a minor cameo in the "Harley Quinn" cartoon, which I love to death.

I've never seen any of his stand-up specials before, but I figured it's not like a sequel where I had to watch his previous routines to laugh at the new material.

The first surprise was just how much language Lopez used. I'd only seen him on network television as a family man before, so how was I supposed to know every other word would be an F-bomb? Woof.

This is the first time I'll say it in this article, but I'm not a prude. Use of language is fine with me. If cursing were an issue, I wouldn't be a big Quentin Tarantino fan, would I? But wow. Lopez's words caught me off guard. And that's just the English I understood. I had no clue what vulgarities he was dispensing in Spanish, but I liked how he hopped back and forth between the languages so seamlessly. That was cool.

Lopez opened his show with some commentary on deportation and transitioned into a hilarious bit about how it should be Latino families deciding who gets deported. They have relatives they like, and relatives that ... not so much.

He also talked about how people from other countries are fantastic. The comedian said he had a man working on his roof who fell from the second story flat on his back. When Lopez went out to check and see if he was OK, the worker apologized to the comedian ... for falling off his house.

Then that worker offered to work overtime for the seconds he was in the air falling. That bit had me laughing pretty hard. And I think what I liked most about Lopez's routine was his delivery.

The man knows how to wait patiently for a joke to sink in with the audience, and for them to laugh maybe a little more than they would have if he just ran full speed from joke to joke every second of his show.

And Lopez is so good with body motion and expressions. He's clearly a seasoned comedy veteran who knows when to make a silly frown, or when to move to accentuate a joke.

Throughout his material, Lopez has a returning theme of how Latinos don't want to live forever. They want to enjoy their food, and they don't want to go to the doctor.

He also mentioned Latinos have different goals from other men. As an example, Lopez said a white father's only goal might be to live long enough to walk his daughter down the aisle. But Lopez? He just wants to outlive everyone that hates him. That seems fair.

Once the comedy special left its opening material, I began to feel as though I was riding on a seesaw. Lopez would say something, and I would laugh or think, "Now that's pretty cool." Then, he would perform a bit of material that would make me furrow my brow and think, "Nah, that's just not funny." One or two jokes even had me thinking he went a little too far.

Case in point. The comedian said he rescues dogs. And I smiled and thought, "That's really sweet." Then he went on with a bit about how there's CBD treats for dogs, and it shuts them up real quick. There's another solid pause for the funny faces and the joke to sink in. Great stuff.

Not long after, he had a bit about how Latina women will pretend their abusive husbands were saints once they die. There was a joke or two involving physical spousal abuse, and that didn't sit right by me. That's just not something to joke about. The seesaw lowered pretty quick.

But then he had a great joke about how growing up in a Latino household, you never spoke about the difficulty of finding a snack. Because your parents would find you something to eat, even an old expired hot dog from the back of the fridge. And if you complained about how it was covered in fat, your parents would tell you to go upstairs, look in the mirror with your shirt off, and then come back and apologize to the hot dog. I laughed pretty hard at that.

See? It was kind of a vicious cycle. Joke I loved. Joke I thought took it too far. Joke I loved. Joke that made me squirm because of its content. It didn't take me long to figure out that was going to be the pattern for "We'll Do It For Half." The jokes were a textbook definition of hit and miss, like a freakin' game of Battleship.

One moment, Lopez is saying inspirational things, like telling parents to make sure their kids know they can be whatever they want to be in the future. The next moment, he's making jokes about the first all-female spacewalk, and the husbands of those astronauts joking about how their wives still aren't far enough away.

But toward the end, the closing material really started to get bad. One bad bit after another, with school shooting jokes, teacher and student sex jokes, and even hot kids in car jokes. Good Lord, man. Some things just aren't funny to joke about. And again, I swear I'm not a prude. Inappropriate humor has slayed before. But there wasn't an enjoyable moment of these final bits.

That is, until the final line. The seesaw raised again. Mess with one bean, and you mess with the whole burrito, Lopez joked. I giggled. I might just have some humor whiplash from this special.

My favorite joke was how Latino parents don't tolerate backtalk. Lopez said he once told his grandmother, "I hate you." And she "had one ready in the chamber." She told her grandbaby that she hated him in the maternity ward, asked the nurse which baby was hers, and then flipped him off. Then she took it a step further and said she hated Lopez as he was being conceived. Dang. Now that's funny.

If Lopez had a weakness in this show, it was how random the repetition seemed. He constantly revisited that line about how Latinos don't want to live forever. Then he'd do another joke in that area. And it didn't seem like he came back to that material intentionally. It just looked like he forgot the joke he wanted to tell and then randomly remembered it minutes later, deciding it was worth revisiting over and over. It sort of interrupted the show's flow.

There was one extremely dated joke in the special. He actually did a bit about people who take pictures of their food. Really? In 2020? As if I haven't heard a variation of that joke from every Boomer I've met since 2010. Maybe let that one retire.

And I kid you not, as I was mentally sighing at that dated joke, he came out of nowhere with the Starbucks bit, and I was laughing again.

"We'll Do It For Half" is a roller coaster of good and bad, much like half the rides at Silver Dollar City. I might watch a future stand-up special with Lopez, but I'd be more excited about a show with zombified John Pinette.