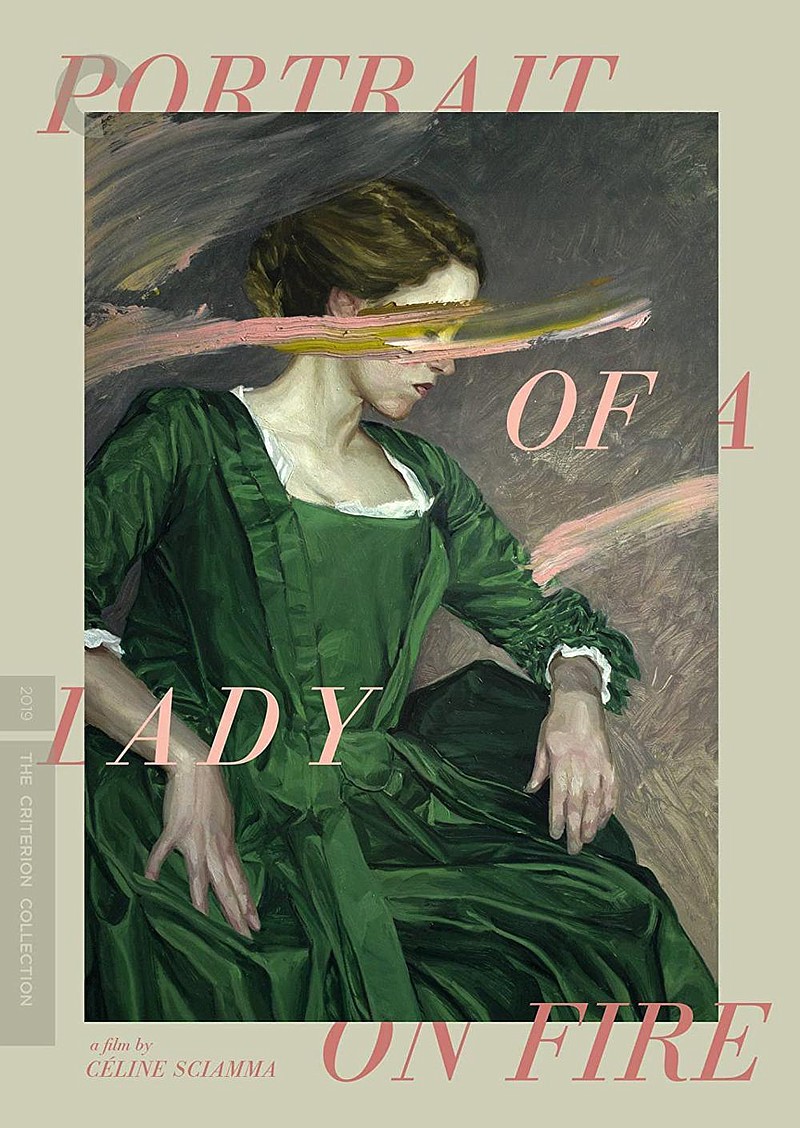 Portrait of a Lady on Fire

"Portrait of a Lady on Fire,"

Céline Sciamma's meditative film marries the conventions of Gothic romance -- a drafty mansion on a wind-swept coast -- to feminist theory, and lets the film's light and noise do their work. This is a painterly film, a clear-eyed tale of love thwarted by the expectations of late 18th-century society.

It begins in the studio of painter Marianne (Noémie Merlant) who is simultaneously posing for and instructing a class of female art students, one of whom has pulled from storage an old painting of Marianne's -- Portrait de la jeune fille en feu. That takes the audience back years, to the coast of Brittany where Marianne is being ferried from the shore to a nearby island. When a crate carrying her canvases tips overboard, she immediately jumps into the ocean to retrieve them.

Upon arriving after dark at the home of the subject she has been commissioned to immortalize, she's soaked. Sophie (Luàna Barjrami) welcomes her, and soon she's warming herself before a hearth, the two canvases she has brought along drying out as well.

Sophie tells Marianne she hasn't known her young mistress Heloise (Adèle Haenel) long; she has only just arrived from the convent. Heloise is to be married soon to a noble Milanese fop originally betrothed to her sister, who went over the cliffs. The portrait Marianne is to paint will introduce Heloise to the suitor who has never met her. If he approves, the wedding will go forth, whether Heloise approves or not.

As Heloise is resistant to sitting for the portrait, her mother explains that the plan is to paint her surreptitiously, that Marianne has been hired as her companion. Marianne agrees and is soon pulled close by her gravity.

Every detail seems to be chosen and arrayed to specify particular attributes of the two main characters. Heloise may be trapped in her trajectory, as Marianne is in hers, but despite the director's stylized presentation of their bodies and dialogues, neither of them function as a symbol.

"Braking for Whales," (nor rated, 1 hour, 43 minutes) An odd yet revealing emotion-riddled drama, which moments of comedy, in which a dysfunctional brother and sister are forced to come to terms with each other and themselves over their recently deceased mother's bizarre final wish. With Tom Felton, Tammin Sursok, Austin Swift; co-written and directed by Sean McEwen.

"Daddy Issues," (not rated, 1 hour, 21 minutes) A unique yet ambiguous approach to same-sex romance is displayed in this romantic comedy where 19-year-old fledgling artist Maya Mitchell (Madison Lawlor) meets flashy fashion designer Jasmine Jones (Montana Manning) and the two begin a mutually supportive relationship that thrives until Maya figure out that Jasmine is dependent on her ability to please a wealthy physician. Twists and turns ensue. With Andrew Pifko; directed by Amara Cash.

"Depeche Mode: Spirits in the Forest," (not rated, 1 hour, 23 minutes) This concert documentary, directed by Anton Corbijn, excels in revealing how a band that's played together for nearly four decades still commands the power to tantalize fans worldwide.

It's the story of Depeche Mode's Global Spirit Tour, with the band performing its renowned synth-pop anthems in front of more than 3 million fans at 115 shows worldwide, from Mongolia to Bogota to Berlin and beyond.

Directed by award-winning filmmaker and artistic collaborator Anton Corbijn and co-directed by Pasqual Gutierrez and John Merizalde, the film offers energetic and brightly visual performance sequences, as well as intimate revelations from devoted fans on how the band's music continues to enthrall all sorts of music lovers through interviews with six of them.

"Miss Fisher and the Crypt of Tears" (not rated, 1 hour, 41 minutes) A big-screen sequel to the popular TV series lacks the energy of the original, as well as the clarity of who is doing what. But there's a pleasant sense of diversion in keeping up with charming detective Miss Fisher (Essie Davis) in 1929, where she rescues a young Bedouin girl in Jerusalem, then scours the globe in search of treasures, wartime secrets and a cursed tomb. Aiding her is fellow detective Jack Robinson (Nathan Page). With Ashleigh Cummings; directed by Tony Tilse.

"Street Survivors: The True Story of the Lynyrd Skynyrd Plane Crash" (not rated, 1 hour, 30 minutes) This documentary tells the story of the 1977 plane crash that kills Lynyrd Skynyrd's founder Ronnie Van Zant and others through survivor Artimus Pyle, the band's drummer, who pulled the remaining survivors out of the plane wreckage. With Sarah French, Jon Briddell, Kelly Lynn Reiter; written and directed by Jared Cohn.

"Lection" (not rated, 1 hour, 41 minutes) An uneven, over-soundtracked political horror thriller, about a local election in a post-apocalyptic society where communication has deteriorated to almost nothing. With Sanethia Dresch, Jennifer Hill, Bradley J. Petit; directed by Mike Amason.

"Force of Nature" (R, 1 hour, 31 minutes) An elaborate robbery planned during a hurricane runs into trouble when a couple of police officers force everyone to evacuate the building where the heist is taking place. Left behind: $55 million. With Mel Gibson, Kate Bosworth, Emile Hirsch, David Zayas; directed by Michael Polish.