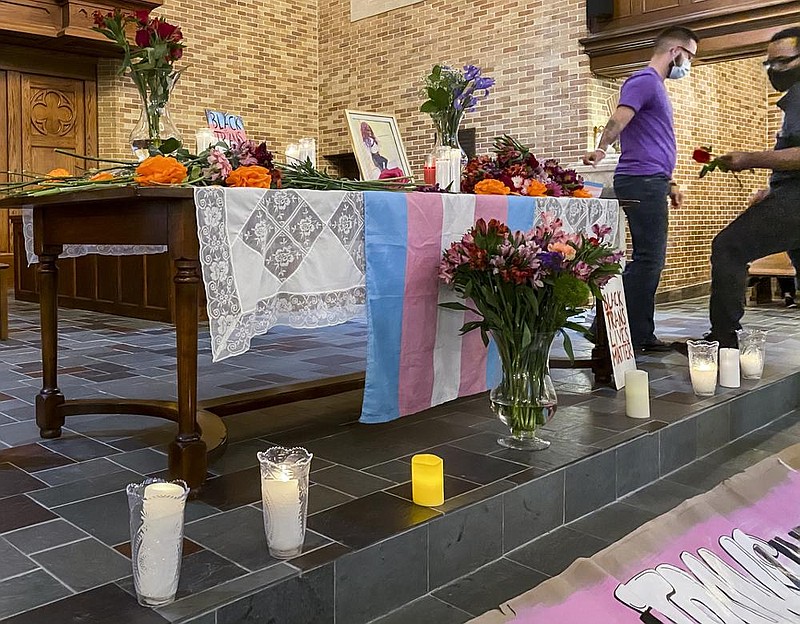 Flowers are placed on a memorial for Brayla Stone, 17, during a nighttime candlelight vigil Monday, June 29, 2020, at First Presbyterian Church in Little Rock. The North Little Rock teenager was found dead June 25 in a vehicle parked on a walking path in Sherwood.

Sherwood police on Thursday arrested a suspect in the killing of a North Little Rock teenager whose body was found June 25 in a vehicle parked on a walking path near Gap Creek Drive in Sherwood, a spokeswoman for the police department said in a news release.

Trevone Miller, 18, has been arrested on a charge of capital murder, according to police. Miller was being held Thursday evening in the Pulaski County jail.

The death of 17-year-old Braylen Stone, a transgender teen who went by the name Brayla Stone, has led Arkansas residents and others across the nation to take to social media calling attention to the killing.

Earlier this week, before the arrest, Sherwood police spokesman officer Richard McNeil wrote in an email that "at this time we do not have any indication or evidence" as to whether the crime was motivated by hate or bias. At the time, McNeil said he could not release a cause of death.

A request to the Pulaski County coroner for a report on Stone was denied this week, with the office citing the ongoing investigation. The report will be released when the investigation has been completed, according to the coroner's office.

Stone's killing has attracted attention on social media in recent days, with individuals sharing her image and name amid renewed attention to violence against Blacks and calls for racial justice spurred by the death of George Floyd in Minneapolis.

Close to 100 people -- family members and supporters -- mourned Stone at a vigil Monday night at First Presbyterian Church in Little Rock by holding lit candles during five minutes of silence. They placed flowers at a memorial that held a framed photo of Stone, a transgender pride flag signified by its light blue, pink and white bars, and a plaque that read "Black Trans Lives Matter."

Relatives told the Arkansas Democrat-Gazette they will remember Stone as a fun-loving and generous person who they knew as Braylen growing up before Stone began living publicly with her gender identity.

"I'm just going to remember him by the loving, kindhearted person he was," Stone's cousin Rikeya Holmes, 17, said after the vigil.

Another cousin, 19-year-old Audrey Jackson, said she would remember Stone as a giving person.

"Everything he had, he split with me," Jackson said. "And I wouldn't even have to ask him."

Speakers at the vigil also called attention to a broader pattern of violence against transgender people.

"I can't believe that this is happening in our community," said longtime LGBTQ advocate Sharyn Grayson, 71.

When asked if they believe Stone's gender identity may have been a factor in her killing, relatives said they simply don't know.

"His family want to know, if not why, who killed him?" Murphy said after the vigil. "Why? Why would they do something like that? Because he was just a child, just about to come into his self, just figuring out who he was."

Before Thursday, the lack of a suspect had inspired some to search for information on their own.

The day after Stone's body was discovered, a Facebook group dedicated to the investigation was formed, and it has amassed nearly 1,200 members.

In a statement on the organization's website, the Human Rights Campaign said Stone's death is believed to be the 17th known violent death of a transgender or gender nonconforming person nationwide in 2020.

Thousands of people rallied in Brooklyn, N.Y. last month for a march for Black trans lives that called attention to the high rates of violence afflicting transgender people of color.

Other transgender women who recently fell victim to acts of violence include 36-year-old Dominique "Rem'mie" Fells, whose body was found in a Philadelphia river June 8, and 25-year-old Riah Milton, who was shot in Liberty Township, Ohio, on June 9.