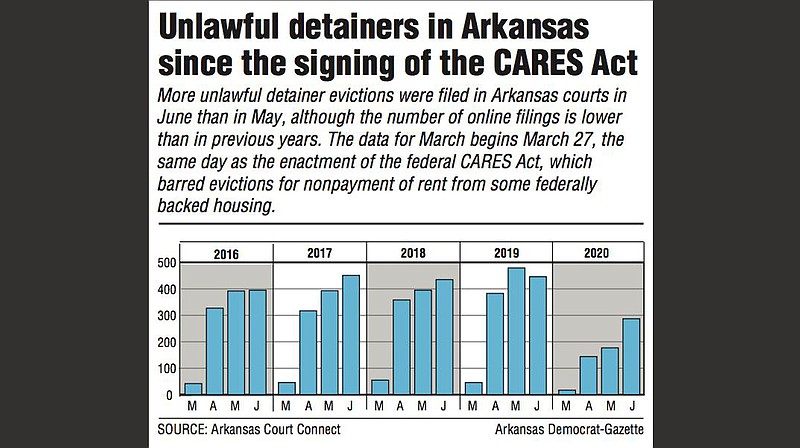 Unlawful detainers in Arkansas since the signing of the CARES Act

The number of evictions filed in Arkansas courts jumped by more than 100 in June, warning of a likely spike at this month's end when a provision setting federal protections for renters expires.

More evictions for nonpayment of rent also seem to be related to the covid-19 pandemic, experts and advocates said.

In May, at least 177 evictions were filed under Arkansas' unlawful detainer statute, according to online records analyzed by the Arkansas Democrat-Gazette. In June, there were 287.

These counts are incomplete as they do not include evictions filed under the state's criminal eviction law, and not all courts post their filings to the state's online search engine.

A provision of the federal Coronavirus Aid, Relief and Economic Security Act, signed into law March 27 to protect against losses during the pandemic, is set to expire July 25.

Also expiring is an Arkansas Supreme Court order mandating that anyone filing an eviction for nonpayment of rent "affirmatively plead" that the property is not covered by the CARES Act.

The act covers about 28% of renters nationally, according to the Congressional Research Service. About one-third of Arkansans are renters.

"We're kind of on the verge of a crisis here and how we come out of it is going to depend on landlords, and it's also going to depend to a greater extent on government," said Lynn Foster, a retired University of Arkansas at Little Rock William H. Bowen School of Law professor who specializes in housing issues.

For the past few months, Foster has analyzed eviction filings and their relation to covid-19 in Arkansas. She said that of the evictions she's reviewed, most were for nonpayment of rent.

Saadian said surveys show that, without assistance, 19 million to 23 million renters nationally may be at risk of eviction.

Despite recent upticks in evictions, numbers of unlawful detainer suits in Arkansas are down from previous years. In June 2019, at least 446 evictions were filed. In 2018, there were at least 435.

Lower numbers this year, experts and advocates said, are likely a result of the CARES Act and other factors. They also cite more evictions occurring outside the legal system, called "self-help evictions," and some landlords willing to work with tenants.

Kendall Lewellen, the housing law practice group leader at Arkansas Legal Services, said her team received about 110 landlord-tenant cases in June, most of them evictions. In June 2019, they had about 39 such cases.

"Many of them lost jobs or had hours reduced because of covid and either cannot access or just are not yet able to access unemployment benefits," Lewellen said.

"The covid crisis has exacerbated their situation because it's not a good time for anybody to be going out and touring apartments or trying to rent a moving truck."

Arkansas Legal Services is a nonprofit that aids people with low incomes.

Foster said that in her review of answers to eviction suits from tenants, she's seen more references to unemployment lately because of the pandemic.

"Due to the covid-19 pandemic, the restaurant industry shut down and it shut down my business," reads one answer filed in June in Pulaski County.

"All I'm asking for is time to get my rent caught up and asked for late fees to be paid separate from rent, I have no where else to go," says one in June in Craighead County. "And I pay my bills, I just went through a rough patch, temporary, I have a job now give me time to get paid."

"The pandemic has caused my business to close down, which caused money to come in slower but I will pay the rent ... We're all in a bad situation these days," says another, filed in June in Crawford County.

Neil Sealy, an organizer with Arkansas Renters United, said he has heard from many renters who were concerned about paying their back rent and rising late fees.

Arkansas Renters United advocates for the rights of renters statewide.

"Even though the CARES Act is about to expire and I think some owners and management companies have been careful about not filing formal evictions, the threats are still there -- they'll charge people with late fees," Sealy said.

Foster said she thinks the solution might not be eviction moratoriums, as passed in many states earlier during the pandemic, though she says such moves are good emergency measures. Arkansas did not have a statewide moratorium.

Federal financial assistance for renters would be a solution that supports both landlords and tenants, she said.

"At what point are landlords going to say, 'Hey, I've been trying to be understanding, but I have a mortgage I have to pay, and I need the rent," Foster said.

That's a solution that both Sealy and Saadian said they support.

The HEROES Act, advanced by the U.S. House of Representatives, includes a $100 billion rental assistance proposal.

All four of Arkansas' representatives voted against the measure.

In statements, the four Republicans said the bill was partisan and included too many measures they did not support.

Alexia Sikora, a spokeswoman for 3rd District Rep. Steve Womack, said in a statement that the HEROES Act had "zero chance" of being signed into law.

"It was a $3 trillion partisan package crafted by Speaker [Nancy] Pelosi behind closed doors and was filled with items unrelated to the coronavirus, including federal takeover of elections, funding for sanctuary cities, and cannabis industry studies," Sikora said.

Fourth District Rep. Bruce Westerman's spokeswoman directed the newspaper to a previous statement on the legislation, which criticized portions of the bill that called for a national vote-by-mail plan.

"Far from being a COVID-19 relief effort, this bill is a thinly-veiled partisan wish list," Westerman's statement read.

Asked what measures Westerman would support to provide assistance for renters, Rebekah Hoshiko, his spokeswoman, did not immediately cite any policy but said that some state-level landlords have worked with tenants on a case-by-case basis.

First District Rep. Rick Crawford's spokesman Jonah Shumate said that many agencies, including those that deal with public housing, are working to ensure Arkansans "are not adversely affected by something they had nothing to do with, namely COVID-19," adding that the congressman was working to ensure jobs are available.

In a statement, Crawford said the legislation included "a federal takeover of elections" and prioritized "illegal aliens over the American people."

Second District Rep. French Hill pointed to his support of the CARES Act and said he voted against the HEROES Act "primarily because we haven't even gotten the first $2.9 trillion out to our schools, hospitals, cities and states," adding that the bill wasn't bipartisan.

He said housing policy is a priority for members on both sides of the aisle and that he'd work with colleagues "so that no one is left behind as we continue to fight this virus."

"Senators are continuing to discuss what additional steps are necessary and looking at where to direct unspent money from previous relief bills, but Majority Leader [Mitch] McConnell has made it clear that the HEROES Act will not be considered in the Senate," Lasure said.