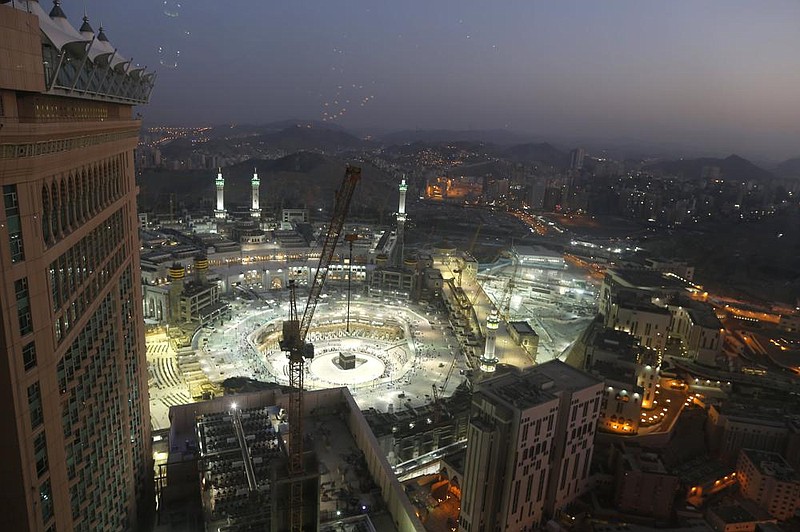 The sun sets at the site of the Grand Mosque, in the Muslim holy city of Mecca, Saudi Arabia, in March as authorities emptied Islam’s holiest site for sterilization because of the covid-19 pandemic. Adherents of the Muslim faith who are physically and fi nancially able to make the pilgrimage must do so at least once, and the recent announcement that only 1,000 pilgrims who reside in the kingdom would be permitted to make the journey this year has millions experiencing sadness and a sense of spiritual loss. (AP/Amr Nabil)

BEIRUT -- For much of his life, Abdul-Halim al-Akoum stashed away cash in hopes of one day traveling from his Lebanese mountain village to perform the hajj, the pilgrimage to Mecca that all Muslims who can are obliged to make once in their lives.

He was all set to go this year until the coronavirus pandemic forced Saudi Arabia to effectively cancel the hajj for what some scholars say may be the first time in history.

"It is the dream of every Muslim believer to visit Mecca and do the hajj," said al-Akoum, 61, a village official. "But the pandemic came with no warning and took away that dream."

The Saudi announcement sent shock waves of sadness and disappointment across the Muslim world, upending the plans of millions of believers to make a trip that many look forward to their whole lives and which, for many, marks a profound spiritual awakening.

A 72-year-old retired port worker in Pakistan will stay home, despite his six children having pooled their money to finance his trip. A mother in Kenya will forgo visiting sites she has long dreamed of seeing. An Egyptian school administrator named Zeinab Ibrahim burst into tears.

"It was my only wish," Ibrahim said. "To cancel it completely is such a shame. May God relieve us of this burden."

Performing the pilgrimage at least once for those who are physically and financially able is one of the five pillars of Islam. Making the trip is such a sacred milestone for the world's 1.8 billion Muslims that in parts of the Arab world families of returned pilgrims paint murals on their homes to alert their neighbors to the pilgrim in their midst.

Many people save up their entire lives to make the hajj and, before modern transportation, spent months getting there.

[Video not showing up above? Click here to watch » https://www.youtube.com/watch?v=J3jvRcZaO8Y]

The pilgrimage conveys such religious status that many Muslims add the honorific "al-Hajj" or "Hajji" to their names on their business cards.

"The hajj is a transformative, emotional and spiritually moving experience -- the spiritual pinnacle of a devout Muslim's life," said Yasir Qadhi, dean of the Islamic Seminary of America, who was supposed to lead a group of 250 pilgrims to Mecca this year.

Since the Saudi announcement, he added, "There's a sense of deflation and spiritual loss, and a great sadness."

The hajj is also big business. The hajj, a five- or six-day pilgrimage that starts this year at the end of July, and the umrah, a lesser pilgrimage that can be performed at any time of the year, earn Saudi Arabia billions of dollars each year, and Muslim communities from Texas to Tajikistan have travel agencies specializing in getting pilgrims to and from the holy sites and providing accommodation along the way.

"It is a catastrophe on all levels -- economic, social and religious," said Tariq Kalach, who runs a Beirut travel agency that was planning to take 400 pilgrims to Mecca this year.

Pilgrimage packages cost from $3,000 to $10,000, he said. He also provides services to a number of Islamic associations that pay for groups of poor Muslims to make the trip each year.

THE RIGHT THING TO DO

He said the cancellation was devastating but that it was the right thing to do.

"It is a very dangerous virus, and it will spread like a brush fire," he said. "May the almighty make things easy for the Muslims."

The Saudi government, for which the hajj is a major source of prestige and tourism, announced last week that no pilgrims from outside the kingdom could perform the hajj this year in order to prevent contagion.

Saudi officials later narrowed the order, saying that only about 1,000 pilgrims would be permitted this year -- a tiny fraction of the 2.5 million who came last year.

The pilgrimage has been interrupted or curtailed many times because of wars and disease but has faced no significant limits on attendance since the mid-1800s, when outbreaks of cholera and plague kept pilgrims away for a number of years.

Saudi Arabia, whose king bears the title "the custodian of the two holy mosques," a reference to holy sites in Mecca and Medina, has never canceled the hajj since the modern kingdom was founded in 1932.

"This is the first time in the global phenomenon of the hajj that it has been canceled in such a manner," said Qadhi, the scholar. "The dynamics have changed. Five hundred years ago you couldn't ban it. There were no passports, no visas."

The Mongol invasion of the Levant in the 13th century, for example, prevented pilgrims from reaching Mecca, he said, "but even then, the locals did it."

Few criticized the decision to limit the event since Saudi Arabia is suffering from one of the largest coronavirus outbreaks in the Middle East, with 161,000 declared infections and more than 1,300 deaths. Epidemiologists have warned that mass gatherings -- from concerts to sporting matches -- can become so-called super-spreader events.

Khalid Almaeena, a Saudi political and media analyst who has attended the hajj many times, said much of the pilgrimage's importance comes from the way it mixes Muslims from different countries, races and social classes who might not otherwise cross paths.

"This is the religious, social, cultural aspect of the hajj," he said. "It is not just the ritual, but the meeting places, the many great friendships and bonds that are established and built there year after year."

In Egypt, the economic hardship of recent years has turned the hajj into an elusive dream for many, which only sharpened the blow of the cancellation.

Ibrahim, the school administrator, applied four years in a row to a government lottery that offers free trips to the hajj, failing every time. But this year, she scraped together the cost from her own funds. "I wanted to go while my health is still good," said Ibrahim, 58, who earns about $175 a month. "I didn't care about the cost."

In many countries, even those who can muster the expense often wait years to be included in their country's quota of pilgrims, which are set by Saudi Arabia with the aim of equalizing the opportunity across the Muslim world.

SOLD LAND TO PAY FOR HAJJ

Imam Mokhi Turk, 45, said that 15 people from his embattled farming village in Kunduz province, Afghanistan, had been waiting for their turn to do the hajj and that some of his neighbors had sold land to pay for it.

Turk and four of his relatives registered for the pilgrimage four years ago but only he made the list this year.

"This makes me very sad, because every Muslim hopes to go to hajj once in his whole life, and when it was my turn, it was canceled," Turk said. "I'm very upset because I'm not sure if I'll be alive in the next few days, let alone next year."

The cancellation weighs particularly heavily on older Muslims who have been waiting for years to go in hopes that they can fulfill their religious obligation before death.

"I have been dreaming about it for 20 years, and I hoped to do it before I got this old," said Firiyan al-Masri, 68, a woman from Beirut.

Finally this year, she got her name on the list of a Lebanese Islamic association that finances trips for those in need, only to see her chances dashed by the pandemic.

"If God wills it, I will do the pilgrimage next year," she said. "If I am still alive." 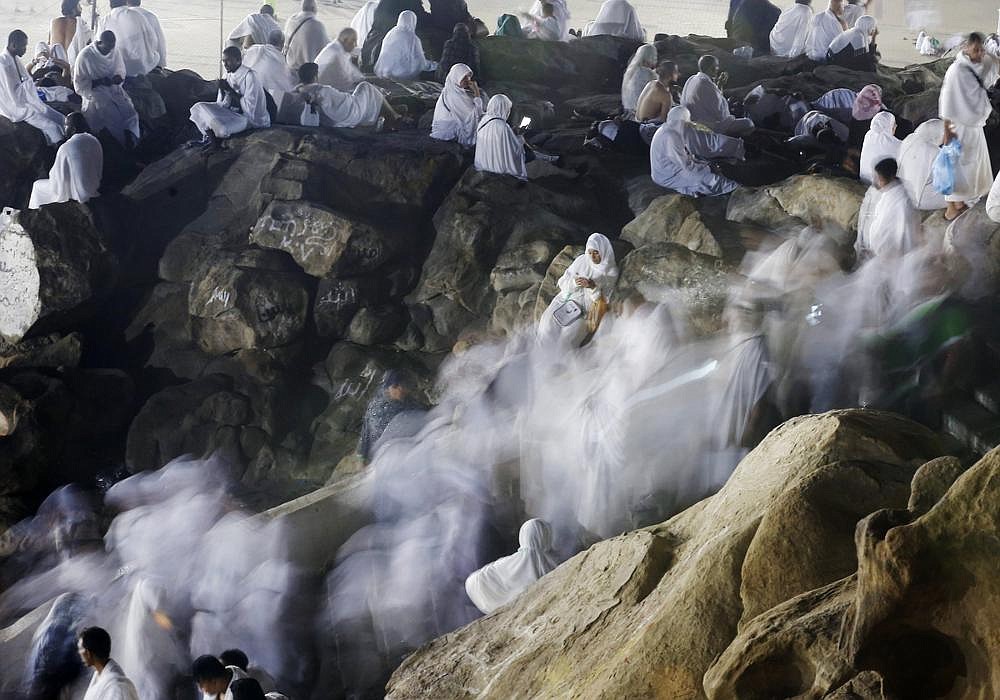 In this August file photo taken with low shutter speed, Muslim pilgrims make their way up a rocky hill known as Mountain of Mercy, on the Plain of Arafat, during the annual hajj pilgrimage, ahead of sunrise near the holy city of Mecca, Saudi Arabia. This year’s hajj will be all but canceled, as Saudi Arabia is in the midst of one of the largest coronavirus outbreaks in the Middle East. (AP/Amr Nabil) 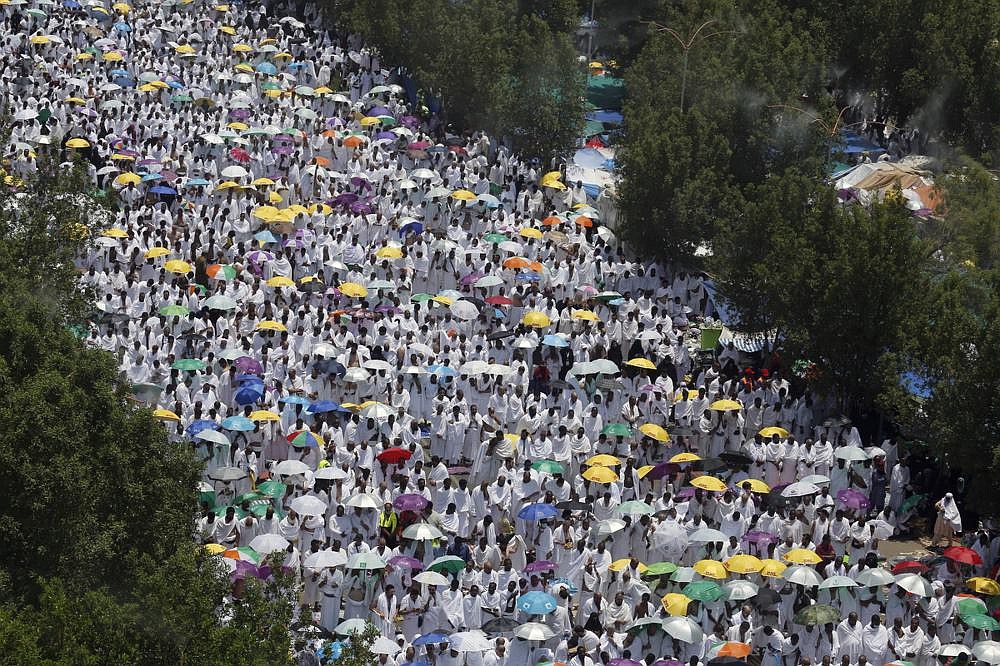 Hundreds of thousands of Muslim pilgrims pray outside Namira Mosque in Arafat during the annual hajj pilgrimage in August, near the holy city of Mecca, Saudi Arabia. The kingdom’s recent announcement that only around 1,000 people would be allowed to perform the pilgrimage dealt a blow to travel agencies specializing in facilitating trips to Mecca and pilgrims alike. (AP/Amr Nabil)
ADVERTISEMENT