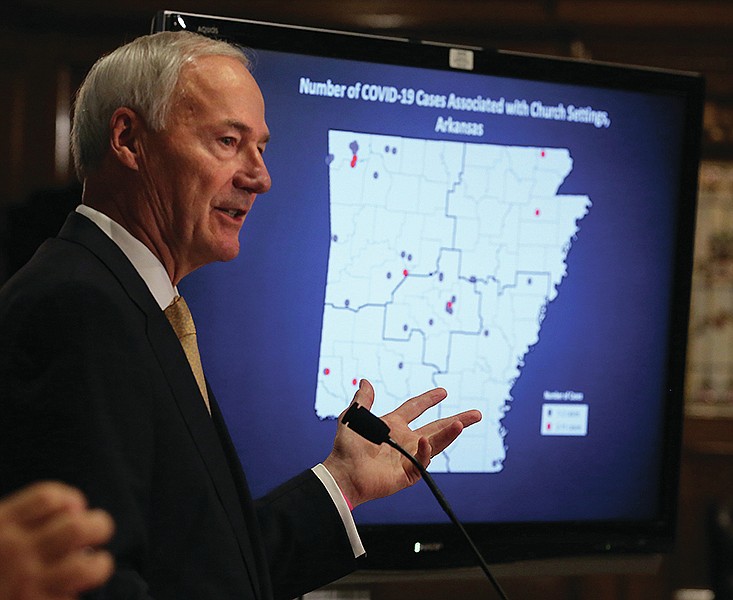 More than 1,500 Baptist churches were angered when the Arkansas Department of Health disclosed misleading covid-19 data about two of the state's largest churches, a leader of the Arkansas Baptist State Convention has warned Gov. Asa Hutchinson.

In their statements at a June 26 covid-19 news briefing, the governor and Health Secretary Nate Smith created a false impression that the churches had disregarded state health directives, convention executive director J.D. "Sonny" Tucker wrote in a June 28 email to top state officials.

Tucker said Hutchinson and Smith compounded the problem by indicating, incorrectly, that the churches had been notified of the problem.

Tucker, who serves on the governor's Economic Recovery Task Force, said Hutchinson should "[i] mmediately instruct the ADH to cease and desist the Friday report on church numbers."

Identifying additional churches that have been visited by covid-19-positive worshipers will spark an uproar that will be hard to quell, he warned.

"This is a brushfire that I believe can be addressed quickly before it becomes a wildfire. However, if this is not addressed quickly and properly, I believe it will become a wildfire," Tucker wrote, noting that he was providing "the point of view of our 5,500 Arkansas Baptist churches' pastors and staff."

While the list, released June 26, included 44 churches from a variety of denominations, two were prominent Southern Baptist congregations: Cross Church in Northwest Arkansas and Central Baptist Church in Jonesboro.

Cross Church, with pre-pandemic weekly attendance of roughly 9,000, is aware of only one person who worshipped at one of its campuses while covid-19-positive, church spokesman Brian Dunaway said.

"That individual didn't believe she got it at church, but at work, and didn't come back until she was cleared," he said.

The congregation has 8,000 members, he noted.

Both churches scrupulously followed state health guidelines and neither should have been singled out, Tucker told state officials.

"When the ADH targets these two churches in a questionable fashion and creates public embarrassment, they raise the ire of 1563 Arkansas Baptist Convention churches with 5500 staff members and 500k church members," Tucker wrote.

Dissatisfaction hasn't been limited to Baptists.

Others on the list say they scrupulously followed the governor's instructions and shouldn't have been stigmatized.

"It's tough to go through, when you have a member test positive, and then to be blackballed by the state is pretty bad, especially when you've tried to do everything the state has asked you to do," said minister Roger Genung of Arkadelphia Church of Christ.

"If they did that with a business they'd be sued right out of their pants," Genung said.

A map on display at the June 26 briefing showed the location of churches with covid-19 clusters, but the names had been omitted, Health Department spokeswoman Meg Mirivel noted. The Health Department didn't provide its list at the briefing, but it was released later under the state Freedom of Information Act.

Most of the congregations on the list had been linked to no more than one or two covid-19 cases over the past three months.

"The church locations are places patients reported visiting during their infectious period, but it doesn't necessarily indicate they became infected there," the document stated toward the bottom.

Greers Ferry First Assembly of God, the first Arkansas congregation linked to covid-19 cases and deaths, wasn't included. That outbreak was so early that it predated the state's public health emergency.

Oak Hill Church of God in Forrest City, which hasn't been linked to any cases, was placed on the list by mistake.

The Health Department, which apologized for the error, is determining how it will handle church-related covid-19 disclosures in the future, Mirivel said.

"This was not put out proactively like we do our other lists," she said. "We have no intention of making this a weekly report."

In a written statement to the Arkansas Democrat-Gazette on Thursday, Hutchinson said the church list had been compiled "for internal purposes" but is not exempt from disclosure when someone requests a copy.

"Unless the Freedom of Information law is changed then the data is public upon media or other inquiry. It was not my choice to release the information, but it was required by law based upon a media inquiry," he said.

The governor also expressed displeasure with the way the list had been reported.

"I don't like the fact that the media presented the information like there was a cluster in a particular church or that they had been careless. That is not the case," he said.

The Democrat-Gazette received a copy of the email from the parks department Thursday after the governor's office classified its copy as exempt under the open records law.

Reached by text message Friday, Tucker said this email and others from the week "were intended as a personal email to provide guidance and assistance, and expressed my personal opinion as a member of the Task Force that publicly listing churches in that fashion, and possibly listing small businesses in the future, is detrimental to our economic recovery."

"Those emails also expressed what I believe to be the strong opinion of many leaders within the Arkansas Baptist State Convention that it is unfair and damaging to single out churches in this fashion," he said.

In the June 28 email, Tucker said churches "feel targeted" because their identities were revealed. If additional church lists follow, Tucker predicted "a non-ending outcry that will extend beyond Arkansas."

He also questioned how the state, citing "confidentiality concerns," could withhold covid-19 data about municipalities if it's going to release it for individual congregations.

"You can expect public demand to release the numbers on retailers, state parks, protest hotspots, restaurants, the poultry industry, etc. If these numbers are not reported, attempts will likely be made through the FOIA. This focus will not help the economic recovery in Arkansas but rather will slow us down. We do not need any more names published. We need to plow ahead," Tucker said.

While the release of information had been unwelcome, Tucker said the problem wasn't intractable.

"This can be corrected. I stand ready to assist in bringing together the interests of 500,000 Arkansas Baptists in support of the Governor in his leadership and economic recovery," Tucker wrote.

At the next day's covid-19 briefing, Hutchinson paused to praise congregations for their efforts to combat the coronavirus.

"In regard to the churches, they're doing a great job and they're really working hard to protect their parishioners," he said.

The governor also called some of the ministers to discuss their concerns.

"In terms of my conversation with the pastors, I explained how this happened and they understood," Hutchinson said in the written statement.

Mason, the Jonesboro pastor, portrayed his discussion with the governor as positive.

"He apologized. He said, 'Man, that was not our intention to hurt the church. We're sorry,'" Mason said.

"Very apologetic. Very nice, very respectful," Mason said. "I have no malice toward them whatsoever."

When churches and other entities defy government guidelines and people get sick as a result, Mason said, it's appropriate for them to be held accountable.

"If there's no transmission, no hot spots. ... Why would you put that out there?" he asked.

Information for this article was contributed by Francisca Jones of the Arkansas Democrat-Gazette.