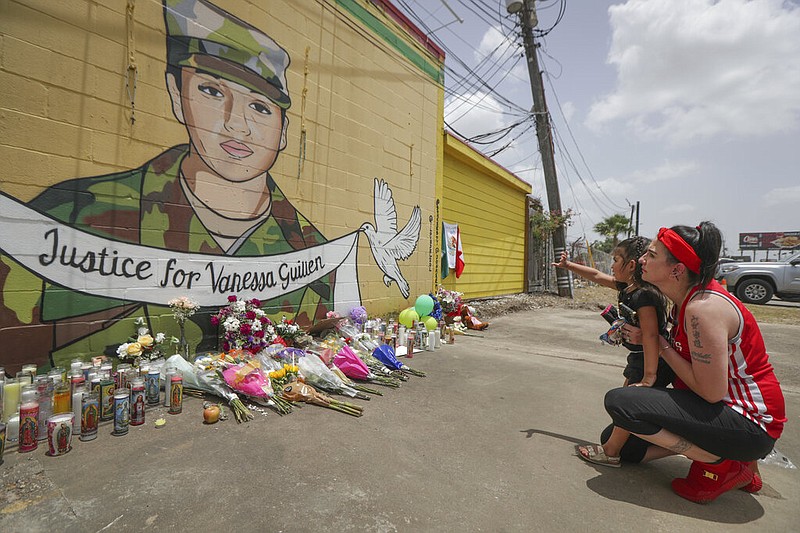 Dawn Gomez holds her 3-year-old granddaughter, Saryia Greer, on Thursday, July 2, 2020, while the girl waves at Vanessa Guillen's mural painted by Alejandro "Donkeeboy" Roman Jr. on the side of Taqueria Del Sol in Houston. Army investigators believe Guillen, a Texas soldier missing since April, was killed by another soldier on the Texas base where they served, the attorney for the missing soldier's family said Thursday.

DALLAS — Army investigators have identified the body of a soldier who vanished more than two months ago from a base in Texas, according to a lawyer for the soldier’s family.

Remains found last week buried near Fort Hood belong to Spc. Vanessa Guillen, and Army officials informed her family in Houston on Sunday, attorney Natalie Khawam told The Associated Press. Guillen, who had been missing since April, was killed and dismembered by a fellow soldier who took his own life last week, federal and military investigators have said.

Human remains were found Tuesday near the Leon River in Bell County, about 20 miles east of Fort Hood, during a the search for Guillen. An Army spokesman said earlier Sunday that they were still waiting for positive identification of the remains.

Investigators were unable to use dental records to identify Guillen because of the state of her remains and instead used DNA from bone and hair samples, Khawam said. Guillen’s family received the information in the company of their priest, she said.

Army officials identified the soldier suspected in Guillen’s disappearance as Aaron David Robinson. Cecily Aguilar, a 22-year-old civilian from a community near near Fort Hood, was arrested and charged with one count for allegedly helping hide the body of 20-year-old solider, according to a criminal complaint.

Guillen’s family has said that they believe she was sexually harassed by Robinson and is calling for a congressional investigation.

Khawam said Sunday that military sexual harassment is “epidemic” and demands attention from Congress. “You can’t turn a blind eye anymore,” she said.