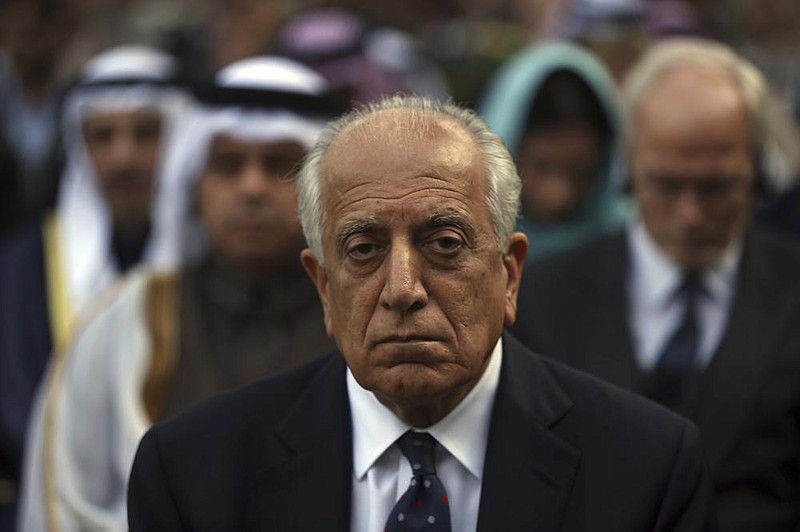 ISLAMABAD -- Washington's envoy to Afghanistan on Saturday emphasized the economic benefits of the peace deal with the Taliban, forging ahead with an agreement that has run into new political obstacles in the U.S. and the region.

Zalmay Khalilzad was wrapping up a weeklong trip that included stops in Uzbekistan, Pakistan and the Persian Gulf state of Qatar, where Taliban negotiators are headquartered.

Khalilzad offered no details about the kinds of economic projects being envisioned to jump-start an economy battered by widespread corruption and currently 75% funded by international donations. However, he did suggest joint economic projects involving Qatar and Pakistan, possibly on infrastructure and trade.

The U.S. signed a peace deal with the Taliban in February to end 19 years of war in Afghanistan.

Khalilzad has sought to stress the economic benefits of the peace deal throughout his tour. In a series of tweets early Saturday, the U.S. envoy said he met with the Qatar Investment Authority and the Taliban's chief negotiator Mullah Abdul Ghani, in the tiny Persian Gulf state's capital of Doha.

"We agreed development plans in support of peace can never start too early," Khalilzad tweeted.

However, Washington has recently become embroiled in a controversy over intelligence reports that Russia was paying money to insurgents with links to the Taliban to kill American and NATO soldiers.

The identity of the insurgents who took the bounty money is still vague, but the payments have been traced to an Afghan drug lord, Rahmatullah Azizi, who is living in Moscow, according to Afghan officials who spoke with The Associated Press.

The officials said the money was delivered through Azizi's brother Wahidullah, who was the go-between for those facilitating the attacks on U.S. troops.

The New York Times first reported the U.S. intelligence claiming the payment of bounties, as well as Azizi's involvement.

Added to the uncertainty and delays swirling around the U.S-Taliban peace deal, the Pentagon released a report Wednesday that questioned the Taliban's commitment to end its ties with al-Qaida. The peace deal calls for the Taliban to fight against terrorist organizations and ensure Afghanistan would not be used again to attack U.S. interests or its allies. Critics of the deal say the militants can't be trusted.

Taliban spokesman Zabihullah Mujahid denied contacts with al-Qaida in the Indian subcontinent, saying the insurgents were committed to the peace deal.

Khalilzad embarked on his tour of the region last weekend, even as the rate of coronavirus infections in the United States soared and countries worldwide struggled with the dangers of reopening.

He did not travel to Afghanistan, citing the dangers of the pandemic, and instead held videoconference calls with Afghan President Ashraf Ghani and his government partner, Abdullah Abdullah.

Pakistan's Foreign Minister Shah Mahmood Qureshi tested positive for covid 19, just 48 after meeting with with Khalilzad. Both had been pictured wearing masks during their meeting Wednesday in the Pakistani capital of Islamabad.

Qureshi said he developed a fever Friday and tested positive to the virus. But he promised to "carry on" his official duties from home.

Even as Khalilzad winds up his latest diplomatic mission, there was no date for intra-Afghan negotiations that bring the Taliban together with the Afghan government and other local actors. Khalilzad called for a quick resolution of outstanding issues so those negotiations could begin.

Ghani earlier this week suggested that his government had a problem with some of the names on the Taliban's list of prisoners to be released and said alternative names would be given.

Seemingly indicative of the lack of health care facilities in Afghanistan to deal with the virus, Ghani's special envoy for economic development, Yosuf Ghaznafar, went to Turkey when he became ill with covid-19. On Friday he died of the disease, according to a statement from the presidency. Ghaznafar is the senior most Afghan official to die of the virus.

Information for this article was contributed by Rahim Faiez of The Associated Press. 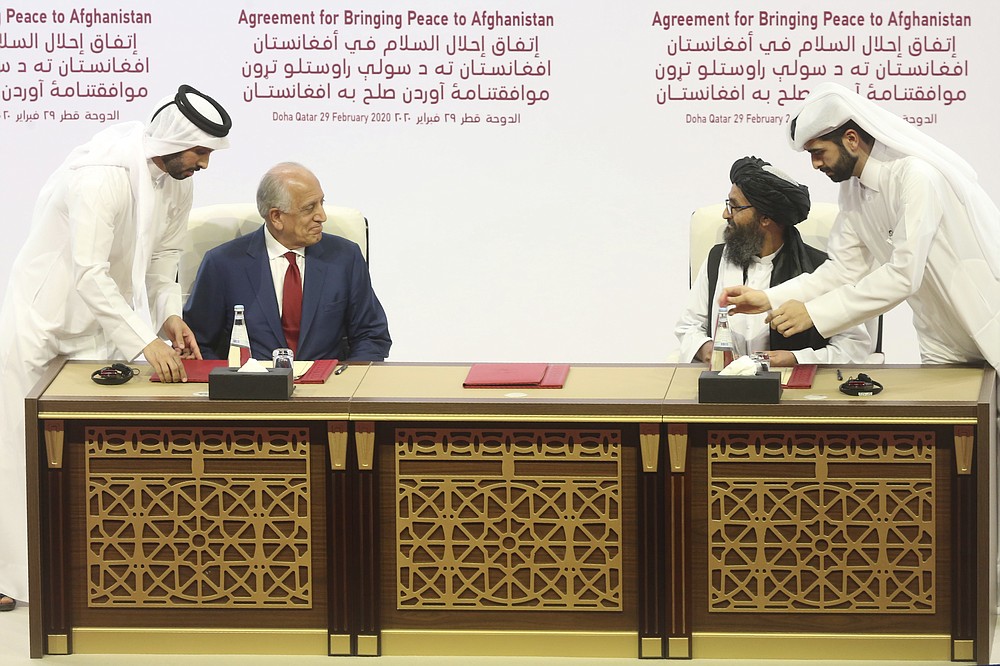 FILE - In this Feb. 29, 2020 file photo, U.S. peace envoy Zalmay Khalilzad, left, and Mullah Abdul Ghani Baradar, the Taliban group's top political leader sign a peace agreement between Taliban and U.S. officials in Doha, Qatar. Washington's annual terrorism report says Pakistan is doing too little to counter terrorist groups particularly those taking aim at enemy India as well as the dreaded Haqqani network operating in Afghanistan. Islamabad bristled at the criticism saying it has been relentless in its assistance to Washington as it be negotiated for more than a year with the Taliban for a peace deal signed on Feb. 29(AP Photo/Hussein Sayed,file)
ADVERTISEMENT