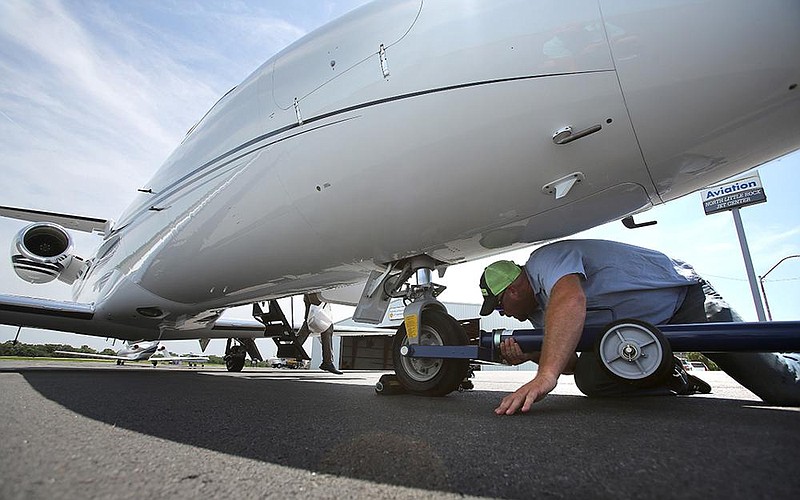 Josh Holmes, a line service technician, hooks up the landing gear of a jet to tow it into the hangar after it landed Friday at the North Little Rock Municipal Airport. (Arkansas Democrat-Gazette/Thomas Metthe)

The North Little Rock Municipal Airport's $3.6 million expansion project is back on after a couple of months of uncertainty because of the coronavirus pandemic.

The Aeronautics Division of the Arkansas Department of Commerce was able to provide $600,000 in grants for the project after learning the downturn in revenue from aviation fuel sales wasn't as bad as projected.

Clay Rogers, the airport's director, said the project to upgrade the airport amenities as a way to attract and keep businesses found a second life after receiving the grant funds.

"We are hoping to break ground by the end of summer or the beginning of fall," Rogers said. "We hope to be complete by summer 2021."

Rogers said the layout should be figured out in the next two weeks, after which contractors will be contacted. 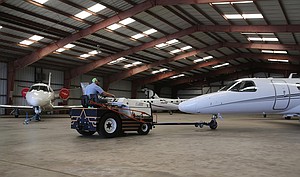 Originally the airport was going to be financed as part of the bond issue that also helped pay for a new police and courts building. The airport component was dropped last year after city officials ran into obstacles over the airport that would have delayed the bond issuance.

A planned restaurant also was dropped from the project, and plans for a new terminal were scaled back to a single story rather than two.

The project still includes a new general aviation center, a 15,000-square-foot corporate aircraft hangar, and expanded parking and connections to the runway and taxiway system at the airport located at 8200 Remount Road.

Rogers had said during a North Little Rock Municipal Airport Commission meeting in April that the expansion project was likely the latest casualty of the coronavirus pandemic.

"The grant money from the Aeronautics Division mostly comes from commercial fuel sales," Rogers said Thursday. "When the pandemic hit, sales went down due to travel restrictions and people being rightfully cautious about boarding a plane."

Rogers said when he began the application process for the grant that Jerry Chism, director of the Aeronautics Division, told him he wasn't sure if the agency could afford to fund the expansion because of the expected revenue hit.

Chism said the airport was fortunate because the agency didn't see a revenue loss until the June financial report.

"We expected to see losses in April and May, but we actually had a good two months there," he said. "The bad news is that our June income was very low. Our July income will probably be down as well."

Chism said the Aeronautics Division's revenue usually drags behind the current economy, which might explain the late hits.

"It was timely for North Little Rock and for us as well that we were able to get the airport expansion funded," he said. "I am hoping when the economy picks back up it stops the downward trend. We need it to stop."

Mayor Joe Smith said the pandemic hasn't yet affected the city's revenue at the airport, but the fixed base operators at the airport have been negatively impacted.

Fixed base operators refers to the private jet services available at an airport, according to Private Fly, a booking service for private charter flights. Such operators can be a small VIP lounge within the general airport terminal, or it can involve a large facility built specifically for private jet usage, offering a range of services for private jet customers, aircraft and crew.

Rogers said some airports will provide their own fixed base operators, but the North Little Rock airport leases its hangars and space to two private companies that provide the services.

"Two businesses that sell fuel at the airport are the ones who have been affected the most by this pandemic," he said. "We get a percentage of those fuel sales, but it's not a huge part of our budget. The two fuel companies are still operating as well, but I don't want to get into their financial information."

Rogers said originally he was afraid the economic situation surrounding the pandemic might lead to people selling their planes or the abandonment of hangars, but he hasn't seen that happen yet.

The airport also received a $69,000 grant from the Federal Aviation Administration, which Rogers said has helped offset any losses the airport has suffered related to the pandemic.

"In April and May, we saw a significant decrease in air traffic," he said. "Businesses that travel out of this airport declined heavily, but we are starting to see things pick back up."