The Issues at Hand 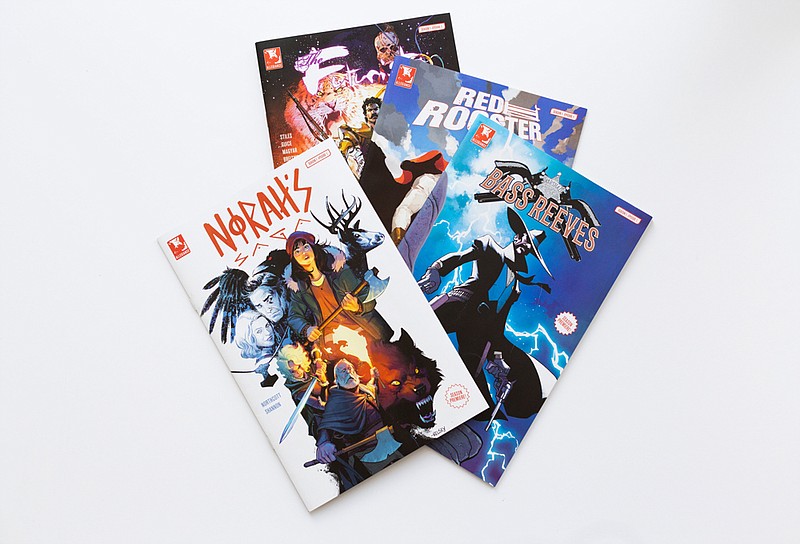 WHILE MITCH and Elizabeth Breitweiser were both working for Marvel Comics, from the mid-2000s to 2012, they became superheroes in their own right—at least to their young nieces and nephews. The kids couldn’t believe their Uncle Mitch and Aunt Elizabeth were illustrating and coloring some of the most well-known characters from the famed comic-book publisher’s stable of heroes—characters such as Captain America and The Incredible Hulk. But while these characters have become household names to a new generation of children, thanks to their appearances in family-friendly big-screen blockbusters like The Avengers, the stories told in their printed-page counterparts featured more adult themes and mature content.

“Our nephews and nieces were such big fans of these legacy characters that we were working on, and they wanted to read our books,” Elizabeth says. “But we couldn’t share our work with them because a lot of the content just was not appropriate.”

It was one of two major problems Elizabeth and Mitch saw in their industry, the other being that the new generation of prospective readers didn’t have ready access to comic books. Around the turn of the century, comic-book readers were starting to grow up, and the medium was no longer attracting new young readers. The main reason for this was that, thanks to a distribution monopoly, comic books had stopped being distributed to places where kids were most likely to encounter them—places like newsstands and spinner racks at the grocery store and the drugstore—and were instead available exclusively at comic-book specialty stores and hobby shops. Basically, Mitch says, if you didn’t already know about comic books and where to get them, you weren’t likely to develop an interest. And even if you did develop an interest and know where to find them, there might not even be a retailer near enough to matter.

These problems persisted well into the Breitweisers’ careers as comic-book creatives, and when the couple’s contracts at Marvel were up in 2012, they decided not to renew them, opting to move back home to Arkansas and go into business for themselves as color artists. But it wasn’t long before they felt called back to the art form they loved so much and decided to launch a publishing company of their own—Allegiance Arts & Entertainment—aimed at addressing the issues they felt were killing their industry.

In December 2018, Mitchell and Elizabeth, along with local businessman David Martin, struck a deal with Walmart that would place Allegiance comics in more than 3,000 stores, around 70 percent of all Walmarts. Earlier this year, on May 5, Allegiance’s first line of books hit the shelves, featuring four titles crafted by a roster of seasoned industry veterans to satisfy both longtime comic-book fans and new readers alike. So with all four series releasing their second issues the week of July 7, we asked the Breitweisers to give us a rundown and introduce us to our new favorite heroes.

The Pitch: It’s like Batman, but in a barn

“So there are 100,000 superheroes for Metropolis and New York and L.A. and Gotham City, right? But there are not too many rural-inspired heroes, and that’s really what Red Rooster is borne out of, sort of our experiences of growing up in Arkansas. The story follows the life of Frank Cooper in the early 1930s. So it’s kind of a Dust Bowl-era, cape-and-cowl mystery, and Frank Cooper is the Red Rooster. He’s the inheritor of an ancient mantle called the Red Rooster and the leader of the Order of the Dawn. Basically, when you pick up his story, he’s a national folk hero, and he’s become famous, essentially. He’s on the cover of cornflakes boxes, and he’s a soda-pop spokesman at the opening of issue 1. So we explore what it’s like for the small-town hero to be at the top. And of course, when you’re at the top, everybody’s out to get you, and you may have nowhere to go but down.”

The Pitch: It’s a Western, based on a true story and retold as a near-Odyssean epic

“Bass Reeves was born a slave and escaped during the Civil War, and basically made his way into the Indian Territory and became a renowned and feared bounty man and tracker. He eventually made his way into Fort Smith [where] Judge Parker, who was the famous Hanging Judge from True Grit and other historical and fictional stories, deputized him. And thus, Bass became the first black man west of the Mississippi to wear the silver star of the U.S. Marshal Service. Bass went on to have an astounding career as a lawman, arresting over 3,000 outlaws—a record he holds to this day. We approached the storytelling very carefully. I mean, we’re not doing a biography. It is a comic book, and the medium is the message. So he has to be a comic-book hero. We structured it around the real events as much as possible, but we had to take some liberties, and that’s where the sort of Odyssean angle of the story comes into play. We really had to make this man a legend in his time. It’s gritty, but it’s not gray and drab and dusty and drab. It’s got a lot of bold color and vivid characters in the storyline that populate it.”

The Pitch: It’s The Wizard of Oz meets Vikings

“Nora’s Saga is the only one of our titles that takes place in a contemporary time. Well, at least at first. It follows Nora, who is a Canadian teenager. She and her father have just moved into the city from a rural area, and she’s experiencing typical teenage problems. But her contemporary teenage problems pale in comparison

to what happens when she and her father have a tragic accident, and she

essentially finds herself trapped in a Norse fantasy world. Like Dorothy, she’s whisked away into a very strange land, but it’s also not totally

dissimilar. A lot of the problems from her teenage life, much like Dorothy’s problems at home, are reflected in the Norse fantasy world. The things that seemed life and death as a teenager, really are life and death. She has to use her smarts and cleverness to win over friends and allies that can help her find her way back to her home.”

“If you’re a fan of Indiana Jones, you might like this kind of project. It’s the 1880s in India, and it’s got this kind of faraway, swashbuckling, romantic adventure where this hero, this former war veteran, has lost his family in the midst of a civil war, and he’s turned into a roguish treasure hunter living in the slums of Delhi and navigating his way through this war-torn landscape. His entire family is caught in the middle of these extremely powerful figures that are on a quest for Shambala: It’s like Shangri La, the hidden city that grants your every desire. The story is about curses. It’s inspired by the “Monkey’s Paw” short story. So if you’re interested in magic and mystery and stories where nothing is as it seems, this is the one for you. And it’s beautifully illustrated by industry legend Butch Guice, who is, in my opinion, one of the greatest comic-book artists, living or dead.”

It’s a bird! It’s a plane! It’s … the best way to start or grow your comic book collection. Visit allegiancearts.com to start the adventure.