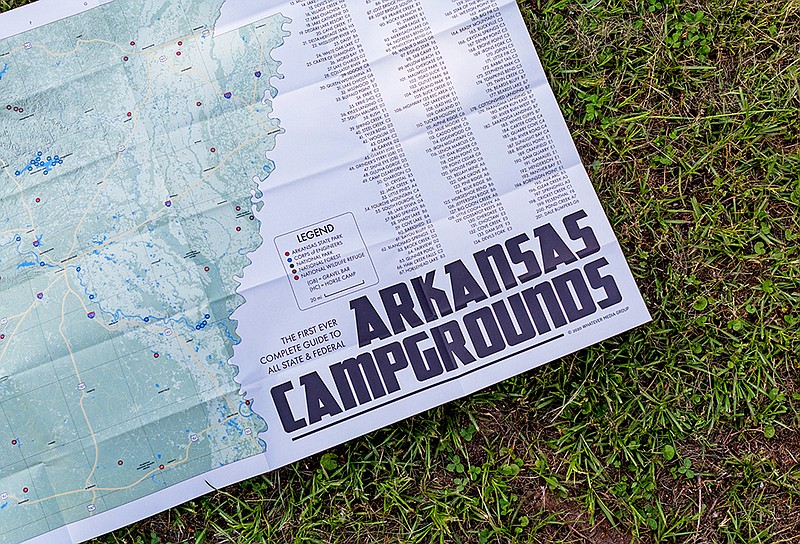 NOT UNLIKE sliced bread, round wheels, cheeseburgers and Snuggies, Jacob Slaton’s comprehensive map of Arkansas campsites is something so necessary, so obvious, you’d just as soon assume it’d always existed. (Editor’s note: Us, too.) But sure enough, some 4 1/2 years ago, when his kids had grown out of diapers and he scored a camper for 500 bucks off Craigslist, Jacob noticed something was missing. He remembers heading out to state campgrounds and inevitably passing three to four others on the way. The family would scout them out, stay for a couple days and then ask themselves: Why didn’t we know about these places?

“You know, when you tell people about Arkansas, you’re not going to list very many things before you get to the outdoors,” Jacob says. “You can talk about Clinton, you can talk about the Razorbacks. But then pretty soon, you’re gonna get to the Buffalo River and the outdoors and hunting and fishing and all that—that’s just kind of the culture here. And camping is kind of tied in with all that. I just couldn’t believe that it had never happened.”

After rummaging around the internet and buying up every Arkansas camping guide he could get his hands on, Jacob realized that while there were great publicly available resources out there—government websites, top-10 lists, et cetera—those resources weren’t talking with each other, so to speak: There was no single all-under-the-same-roof reference for campsites.

So he decided to make one.

After several years of phone calls and internet gumshoeing, he finally realized his labor of love earlier this year: a color-coded map of 201 camping sites spread all across the state—state parks, U.S. Army Corps of Engineers, National Forest and all the rest—with contact info, websites and GPS coordinates.

What comes next? Well, for starters, Missouri—and maybe Tennessee.

“As a camper, this is exactly what I want for my state,” Jacob says. “And I know there are other people like me who want this for their states, so I’m hoping to bring it to the rest of the world.”