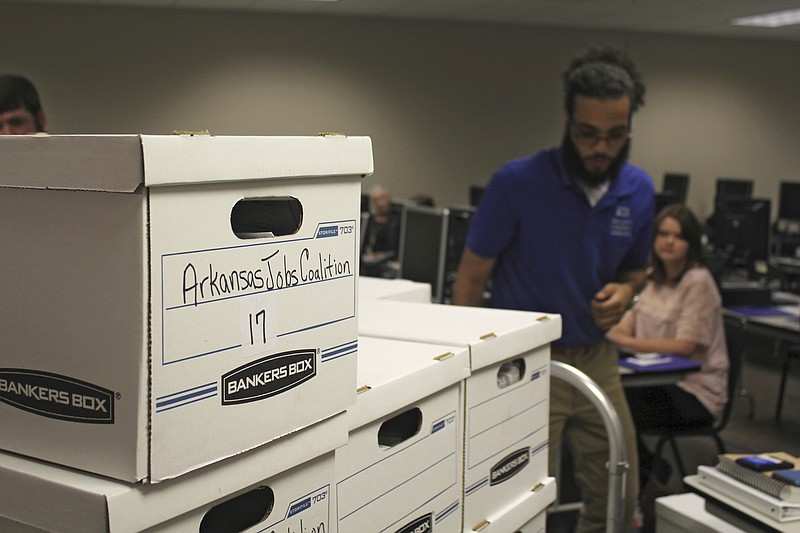 FILE - This July 6, 2018, file photo shows boxes containing petitions in favor of a proposal to legalize casinos in Arkansas, delivered to the Arkansas secretary of state's office in Little Rock, Ark. Voters in several states dominated politically by Republicans have passed ballot initiatives in recent years to expand Medicaid, legalize marijuana, raise the minimum wage and reform the redistricting process. This has led several GOP legislatures and governors to begin cracking down on the initiative process in ways that will make it harder for the public to quality ballot measures. (AP Photo/Andrew Demillo, File)

The committees advocating for constitutional amendments that would change who redraws legislative and congressional district boundaries, create ranked-choice voting for most state offices and authorize 16 more casino licenses in Arkansas said they each turned in more signatures on Monday than required in their bids to qualify their measures for the Nov. 3 general election ballot.

Monday was the last day for ballot committees promoting proposed amendments to submit to the secretary of state's office the required 89,151 signatures of registered voters, which is 10% of the total votes cast for governor in the 2018 general election, to qualify for the ballot. The committees also are required to have signatures equal to at least 5% of votes cast for governor in 15 counties.

The Arkansas Voters First committee's proposed constitutional amendment would shift the authority for redrawing the boundaries of the state's legislative districts from the state Board of Apportionment -- comprising the governor, attorney general and secretary of state -- to a nine-member independent commission comprising three Democrats, three Republicans and three independents.

Arkansas Voters First Chairwoman Bonnie Miller of Fayetteville signed an affidavit with the secretary of state's office certifying that the committee submitted petitions containing 98,728 signatures and signatures of registered voters equaling at least 5% of the votes cast for governor in 2018 in 15 counties. 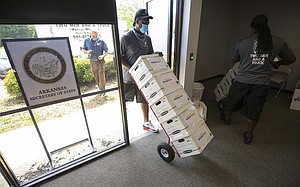 Photo by Staton Breidenthal
Movers Theo Reed (left) and Joe Mathews unload boxes of signatures from Arkansas Voters First on Monday, July 6, 2020, at the secretary of state’s office in Little Rock. The group was seeking a constitutional amendment that would establish an independent redistricting commission.

"For a couple of weeks, I think we were just a little worried about how we were going to move forward [amid the covid-19 pandemic], but we always knew that the momentum was there and that the desire from Arkansans was there," she told reporters.

David Couch, an attorney for the Arkansas Voters First committee, said he expects the committee to qualify for the 30-day cure period.

Miller said the proposed constitutional amendment "is about fairness and equity, and it's not a party issue."

"We want an independent redistricting commission that works against hyperpartisanism and works to benefit constituents, and it's nonpartisan. We don't want either party to have control over this process. We want voters to have the power to draw our district lines," she told reporters.

State Republican Party Chairman Doyle Webb said that "Democrats have for years tried to do by other means what they cannot do at the ballot box: achieving electoral wins."

"We saw this when Winthrop Rockefeller became governor and they changed how election commissioners were determined, having previously been by the party of the governor instead of the majority of constitutional officers," he said in a written statement.

"Now, holding no constitutional offices or any federal representation from Arkansas, they want change again," Webb said. "They were accepting of the governor, attorney general, and secretary of state being the deciding and thereby accountable officials charged with drawing state legislative districts. It worked for over 150 years. Now that method does not work for them, why? Perhaps because for the first time since Reconstruction there will be Republican elected officials making those decisions. The era of Democratic Party gerrymandering in Arkansas has come to an end."

Miller said that "the system that we currently have now allows politicians to choose their voters and not the other way around, and that leads to a government where politicians are not held accountable."

"As we have seen over the past decades, our maps have become more distorted, and again it is not a party issue," she said. "We have seen Democrats draw very bad maps also. We don't want either party to have control over that, and the commission would be made up of three Democrats, three Republicans and three independents, so it is fair and balanced."

Couch said he also turned in a separate file of about 1,000 unwitnessed signatures of registered voters to the secretary of state's office.

In mid-June, a federal appeals court halted U.S. District Judge P.K. Holmes' decision in late May blocking an Arkansas requirement for signatures on proposed ballot measures to be witnessed in person. The 8th Circuit stayed Holmes' ruling, which prevented the state from enforcing the witness requirements and blocked the requirement that canvassers sign affidavits in the presence of notaries. Holmes' ruling came in a lawsuit filed by the Arkansas Voters First committee.

To qualify a proposed measure for the ballot, committees also are required to have the Arkansas Board of Election Commissioners sign off on the ballot title and popular name of the proposed measure. Act 376 of 2019 shifted the responsibility for certifying that the ballot title and popular name of proposed ballot measures meet the standards of state law, moving that duty from the attorney general to the election commissioners board.

The Open Primaries Arkansas committee is promoting the proposed constitutional amendment that would adopt ranked-choice voting for most state offices.

Stephanie Matthews of Little Rock, representing the Arkansas Voters First committee, which collected the signatures for this proposed constitutional amendment, signed an affidavit with the secretary of state's office certifying that the committee turned in 94,913 signatures and signatures equaling at least 5% of the votes cast for governor in the 2018 general election in 15 counties.

Couch said he expects that the committee turned in enough valid signatures to qualify for the 30-day cure period.

Matthews said that "open primaries give voters more choice and more voice in the primary process in choosing who they elect to represent them."

"Whether the big party bosses think this is a good idea or not, this really is not for them," she said.

"This is for Arkansas voters having more power in elections."

The Arkansas Wins in 2020 Inc. committee promoted a proposed constitutional amendment that would authorize the Arkansas Racing Commission to issue casino licenses to 16 private companies across the state.

Todd Wooten, an attorney for the the Arkansas Wins in 2020 Inc. committee, signed an affidavit with the secretary of state's office certifying that the committee turned in 97,039 signatures and signatures equal to 5% of voters who cast ballots for governor in the 2018 election in 29 counties.

The Arkansas Racing Commission already has authorized three casinos under Amendment 100 to the Arkansas Constitution, which was approved by voters in November 2018.

Gambling operations and racetracks in Hot Springs and West Memphis have been expanded to full-fledged casinos, and a casino is under construction in Pine Bluff. Amendment 100 also authorizes the racing commission to issue a casino license in Pope County, which it hasn't done yet.

Committee spokesman Taylor Riddle said that "we have spoken with voters across the state who are excited about expanding the gaming industry in Arkansas."

The Fair Play for Arkansas committee, which proposed a constitutional amendment to remove Pope County as a location for a casino under Amendment 100, didn't submit petitions for its proposed amendment by Monday's deadline.

"When we launched this campaign last month, a federal judge had ruled that signatures could be submitted on petitions without a notarized witness, which would have allowed our volunteer network to operate safely within the limitations of the pandemic," said committee spokesman Hans Stiritz.

Unfortunately, that ruling was stayed and will likely remain overturned, he said, adding that the group was encouraged by the number of Arkansans who supported the canvassing efforts.

"Going forward, the citizens of Pope County will continue to fight for the same freedom from predatory gambling and intrusion on our community enjoyed by 71 counties in our state," Stiritz said in a written statement. "We will use every available political, judicial, and legislative avenue to stop out-of-state interests from forcing their (elsewhere illegal) business into our community."