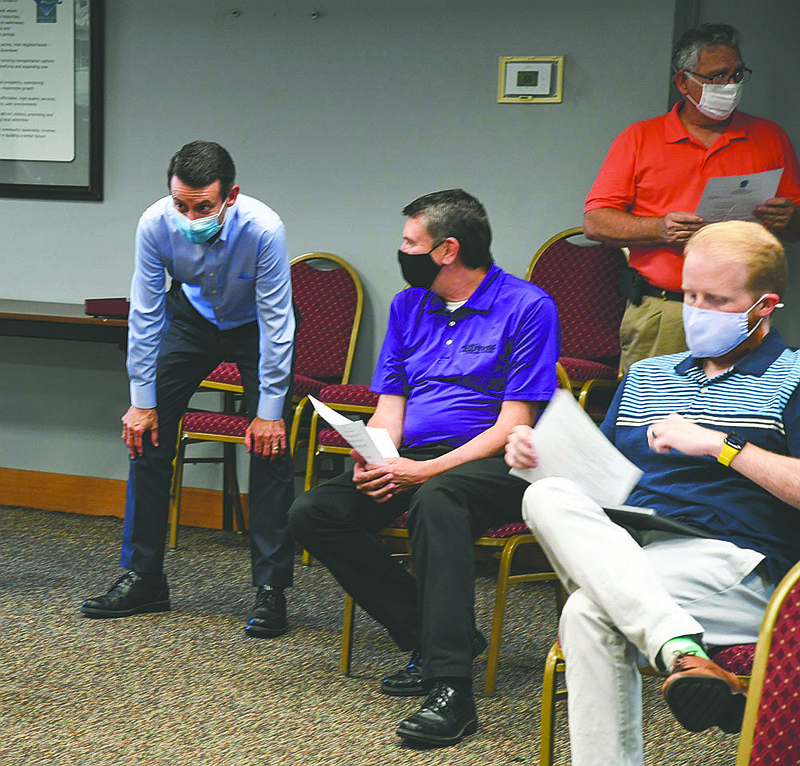 From left, Ed Sanders speaks to Neal Harrington as Corey Alderdice, director of the Arkansas School for Mathematics, Sciences, and the Arts, right, waits for the start of Tuesday’s Hot Springs Board of Directors meeting at City Hall. - Photo by Grace Brown of The Sentinel-Record

The Hot Springs Board of Directors unanimously approved an ordinance Tuesday night that mirrors a "sample ordinance" the governor released last week regarding the wearing of face masks to prevent the spread of covid-19.

The ordinance, which was added to Tuesday's agenda, supplanted a resolution the board placed on the agenda last week.

"The ordinance promotes the use of education and encouragement as the most effective means to ensure the use of face masks," the city said in an email on Monday regarding the updated agenda for Tuesday's board meeting. "It also allows for the use of law enforcement to support local businesses that encounter individuals who refuse to wear a mask."

City Attorney Brian Albright told the board the ordinance "does not require anyone to wear a mask."

Albright said the ordinance was the culmination of discussions between the Department of Health, the governor's office and the Arkansas Municipal League. The ordinance, which was added to Tuesday's agenda, supplanted a resolution the board placed on the agenda last week.

Gov. Asa Hutchinson, in response to a rise in the number of covid-19 cases across Arkansas, issued on Friday an executive order that "clarifies local governments' responses to the health crisis," the city said in the Monday email.

Hot Springs' ordinance references guidance released by the Arkansas Department of Health on June 19, "which noted overwhelming scientific evidence that the wearing of face masks helps prevent the transmission of COVID-19.”