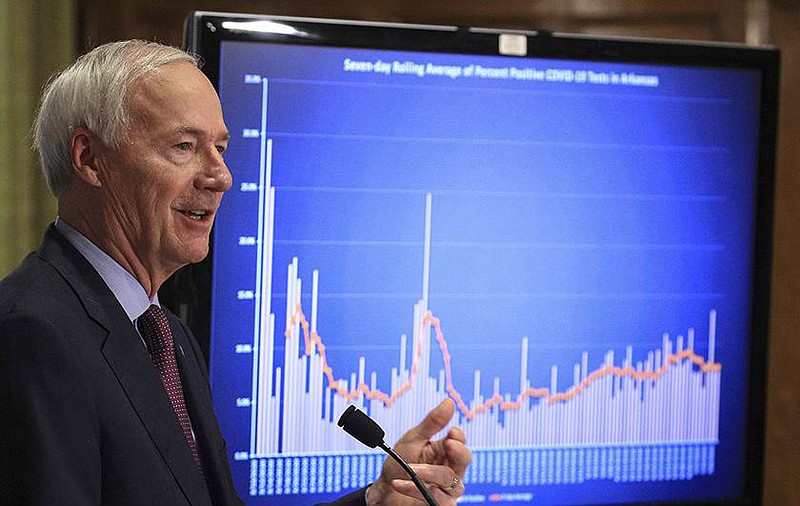 Gov. Asa Hutchinson said Wednesday that the rising number of coronavirus cases in three previously less affected counties shows “that there’s not any place that’s immune from this, and we have to continue to be careful.” More photos at arkansasonline.com/79governor/. (Arkansas Democrat-Gazette/Staton Breidenthal)

Arkansas' count of coronavirus cases increased Wednesday by 734, the second-highest number added in a single day.

The state Department of Health's count of deaths from the virus rose by four, to 305, while the number of Arkansans hospitalized with covid-19 fell by 11, to 358.

Seventy-nine of the patients were on ventilators, down from 83 a day earlier.

Data collected by The New York Times indicates that was a first for those counties.

"We're seeing a number of new counties with over 20 [new cases], and that shows that our testing is very widespread, and we're detecting new elements of the virus that we can then go in and hopefully isolate," Gov. Asa Hutchinson said.

"It's also a significant alert to those counties that have not been in the top 10 counties [for new cases] previously that there's not any place that's immune from this, and we have to continue to be careful," he said.

[Video not showing up above? Click here to watch » https://www.youtube.com/watch?v=EmmXwyDzYw4]

Wednesday's increase followed two days of slower growth in the number of new cases added to the state's total, which state officials said was at least partly due to a reduction in testing over the Fourth of July holiday weekend.

The larger number of new cases added Wednesday was an indication that testing had picked up again this week, Health Department Secretary Nate Smith said.

"We're at a phase of this epidemic where we're not seeing this being driven primarily by a specific setting like nursing homes or correctional facilities or some particular occupation," he said.

He said it's too early to say whether Fourth of July activities contributed to the spread. Once people become infected, it typically takes five or six days before they develop symptoms, he said.

The number of cases in the state that were considered active, meaning the person tested positive and hasn't yet recovered, increased by 59, to 5,545.

The active-cases total reflected the new cases and subtracted deaths and the 671 people who were newly classified as having recovered.

The active cases as of Wednesday included 350 prison or jail inmates and 125 nursing home residents.

At his near-daily news conference on the pandemic, Hutchinson said he had received "a lot of reports that people are waiting in line in Washington County to get their tests done, and we have testing done at the Washington Regional Medical Center that is limited in their ability to do large-quantities testing."

In response, Jose Romero, the Health Department's chief medical officer, said the Washington County Health Unit in Fayetteville will be expanding its hours so that it will be open from 7 a.m. to 7 p.m. instead of 8 a.m. to 4:30 p.m.

"Everybody seems to be going to Washington Regional Medical Center, not sufficiently going to their public health lab, which has more capacity currently to do that," Hutchinson said.

The hospital responded in a statement that it has "the capacity to test individuals who meet testing criteria, and those who meet this criteria have not been turned away or had to wait for extended periods of time."

"Since March 13, Washington Regional has completed more than 12,200 COVID-19 tests," the hospital said. "We operate COVID-19 call centers and testing locations that are available to the community seven days per week."

The hospital added that it welcomed the news that the health unit will be expanding its hours "to broaden the testing resources available to our community and aid in the management of this pandemic."

Smith said he had himself tested at the Health Department over the weekend after a friend he had lunch with earlier in the week developed symptoms and was tested.

"While waiting for the results, I decided I better go ahead and get tested before I showed up on Monday," Smith said.

The results for both Smith and the friend came back negative, Smith said.

He also tweeted that he may cut off funding for schools that don't open.

Hutchinson said Trump's push for schools to reopen in the fall is "really consistent with what I've been saying a month ago, if not longer."

"We're going to start school this year with in-classroom instruction, with a blended environment, an option to go virtual as needed, and that's where we're going," he said.

As for the CDC guidelines, he said, "We'll continue to watch, be informed by them, but ultimately we're going to make the decisions based on the uniqueness of the circumstances here."

Asked to list the most important issue facing the state, the largest percentage of respondents, 42%, listed the coronavirus, followed by 18% who listed the economy.

Of the 43% of respondents who have children, 59% said they were likely to send them back to school in the fall for in-person instruction.

That compared with 32% who said they were not likely to do that.

The poll also found that 58% of Arkansans felt their workplaces were following the proper health protocols in response to the virus.

Only 9% said their workplaces were not taking the right precautions, while 33% didn't know or did not work outside the home.

The poll also found that 54% of respondents opposed the resumption of large events, such as sports competitions and concerts, in the fall.

By contrast, 37% said they supported the resumption of those activities.

The poll also found that 55% of respondents favored a regional or local approach to health directives and the closure of businesses and schools, while 35% favored a statewide approach to those issues.

Hutchinson indicated that finding was one reason he unveiled a model ordinance last week that cities can adopt to require people to wear masks in public places.

In announcing that step, he also cited a finding from the poll that 82% of Arkansans say they wear "personal protective equipment like a mask" in public places.

The poll of 600 adults had a margin of error of 4 percentage points.

In addition to the new cases in Mississippi, Johnson and Saline counties, the ones added to the state's total included 87 in Pulaski County, 72 in Washington County, 60 in Benton County, 46 in Pope County and 32 in Yell County.

In Pope County, 80% of the new cases were in Russellville, Smith said.

The ones in Mississippi County were split between Osceola and Blytheville.

In Johnson County, 89% of the new cases were in Clarksville, he said.

Positive test results among campers and counselors prompted the voluntary closure of Camp Ozark, a summer camp near Mount Ida that each year hosts thousands of children ages 7-17, Smith said.

"They initially sent campers home and some counselors home, and then as they had additional cases, they made the decision on their own to go ahead and close down for now," Smith said.

"We support that decision, and we appreciate them partnering with us, and we'll continue to work with them in whatever way needed," Smith said.

Little Rock's Jericho Way Day Resource Center for the homeless said on its Facebook page Wednesday that it would close for the rest of the week for cleaning after one of its staff members tested positive. It said all staff members will be tested.

The state's count of cases among prison and jail inmates increased by 104, which could reflect new test results or the cases that were reported earlier but were newly classified in a Health Department database as being from jails or prisons.

At the East Arkansas Regional Unit in Brickeys, the number of inmates listed in Health Department reports as having tested positive increased by 141, to 791.

The number of cases among inmates increased by eight, to 49, at the Northwest Arkansas Work Release Center in Springdale, and by one, to 82, at the Wrightsville Unit.

Meanwhile, a report from the Pulaski County coroner's office identified the inmate from the East Arkansas Regional Unit who died of covid-19 Saturday as Jimmy Frost.

Frost, 61, had served more than a decade in prison for shooting his wife, Vanessa, in 2007.

According to court records from Drew County, Frost shot his wife three times after several weeks of separation. She survived the shooting, and Frost was sentenced to 23 years in prison for attempted murder, a terroristic act and illegal possession of a firearm.

He was admitted to Baptist Health Medical Center-North Little Rock on June 28 with respiratory failure, according to the coroner's report.

One other inmate at the prison, who hasn't been named, died of the virus last month.

Information for this article was contributed by John Moritz of the Arkansas Democrat-Gazette and by staff members of the Hot Springs Sentinel-Record. 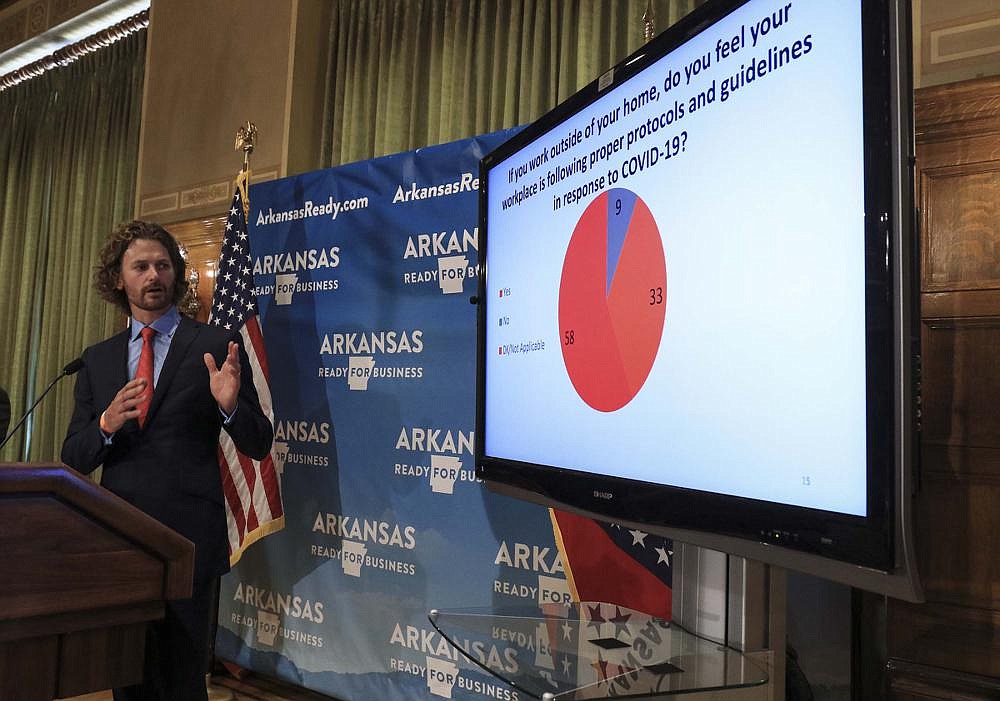 Steuart Walton, chairman of the Arkansas Economic Recovery Task Force, gives more results Wednesday from a poll taken in late June that included a question about the most important issue facing the state. The largest percentage of respondents, 42%, listed the coronavirus, with the economy second at 18%. Most respondents, 55%, said they were comfortable doing in-person activities, such as going to the grocery store or getting haircuts, while 41% said they were uncomfortable. (Arkansas Democrat-Gazette/Staton Breidenthal) 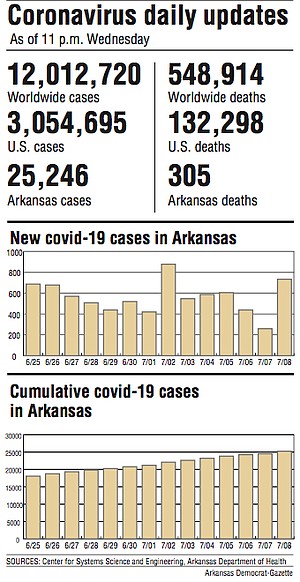