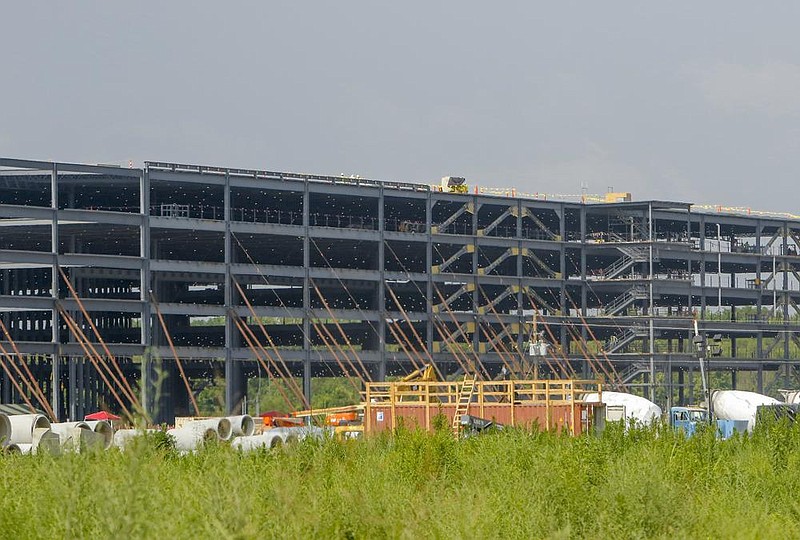 Construction continues Thursday on an Amazon facility of Zeuber Road, near the Port of Little Rock. The five-story warehouse will be four times larger than Amazon officials indicated earlier this week. (Arkansas Democrat-Gazette/John Sykes Jr.)

The Amazon.com warehouse rising at the Port of Little Rock will be four times as large as company officials acknowledged in Amazon's first public statement about the project, according to plans on file with the city.

The five-story building will total 3.4 million square feet, according to plans reviewed by the Arkansas Democrat-Gazette. In a statement Tuesday, the Seattle company said the building will cover 826,000 square feet. The statement was the first confirmation by the company of its plans for the 80-acre site.

Little Rock Mayor Frank Scott first disclosed the project April 7, the day the city Board of Directors approved the $3.2 million sale of the property.

An Amazon media representative, Jen Crowcroft, didn't respond to an email sent Wednesday asking for an explanation of the discrepancy in the size of the project.

A representative for the mayor, Stephanie Jackson, explained the discrepancy this way in an email: "The building is multi-storied, which creates a much larger total square footage for the fulfillment center's purposes."

With cost of new construction conservatively ranging between $75 and $100 per square foot, commercial real estate executives said, the project's price tag will be at least $255 million and as much as $340 million.

At 3.4 million square feet, the building also has the capacity for more workers than the 1,000 employees Amazon said it will hire, although that is far from certain, especially since the company is developing robotic systems to handle more of the chores that employees perform.

By comparison, an Amazon fulfillment center in Tracy, Calif., that encompassed 1.2 million square feet employed 3,000 workers at the height of the Christmas shopping season last year, a time when seasonal full-time and part-time workers also would have been on the payroll, according to news reports.

Plans show that the five levels at the port site total 3,373,876 square feet of space.

The first level and a mezzanine will have 776,000 square feet, which is slightly smaller than the Dillard's fulfillment center in Maumelle at 785,259 square feet.

According to a safety diagram included in the plans for the Amazon site, the first level has enough room for 2,267 occupants. There are 32 exits on the first level.

The first level also includes at least three break rooms; an area for lockers; a recruiting open area; a first-day training classroom; a career choice classroom; and other offices. Like the other levels, most of the space is open for processing, packaging and delivering orders.

Each of the other four levels takes up 649,469 square feet, enough room for 1,299 occupants each, according to the plans. Each of those levels has 12 exits.

Amazon's Tuesday morning announcement was made a day after state, county and local officials broke ground on infrastructure improvements worth $11.2 million at the port that they said would benefit Amazon and another company, CZ-USA, a gun manufacturer expected to begin construction on its facility in August. The work, mostly road improvements, will benefit other port tenants that combined employ more than 4,000 people.

The Arkansas Economic Development Commission's contribution of $1 million toward the widening of Fourche Dam Pike and other infrastructure improvements was cited by the Arkansas Commerce Department's spokeswoman, Alisha Curtis, as the only state incentives offered for the port project.

Amazon often arranges for specialty firms to build its facilities and then leases them, according to industry trade publications.

CoStar, a commercial real estate information company, recently reported that Amazon is the most active in leasing warehouse space since the coronavirus pandemic began, riding the wave of growth in e-commerce. The company has signed 38 new deals spanning almost 20 million square feet of space.

Amazon also confirmed Tuesday that it will open an 85,000-square-foot delivery station in a warehouse on Interstate 30 in Alexander. Delivery stations serve the "last mile" of delivery for items people purchase on Amazon.com. The company is spending nearly $8 million to remodel the I-30 warehouse to suit its needs.

The company opened its first Arkansas facility in 2018 in North Little Rock. The tentlike structure is designed to help with last-mile deliveries using Amazon vans owned by contractors to deliver packages.

The port site also has an address -- 7001 Zeuber Road, according to a plumbing permit that the architect for the project, Sean Hasson of Stantec, an international architectural firm in Pittsburgh, sought from the state Health Department this month.

The project is still called Project Diamond in the permit request. Amazon often uses code names for its projects.