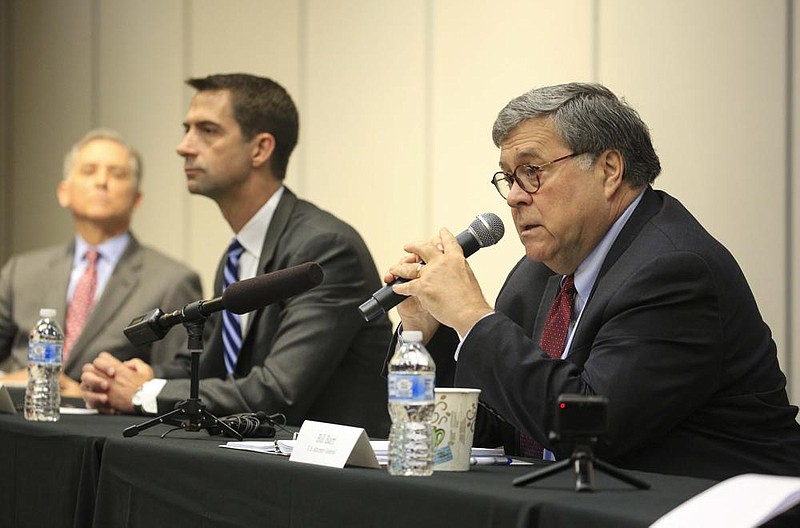 "That event in Minneapolis, the killing of Mr. [George] Floyd, led to legitimate demonstrations that were then hijacked by a hard-core group of extreme, violent instigators and we've had rioting throughout the country," he said.

"We're building up our intelligence on these instigators. We've already arrested over 150 people on federal charges and we have over 500 investigations underway going on across the nation focused on these hard-core instigators that are involved in this rioting," he said.

At a news conference later in the day, Barr said "professional agitators," anarchists and extremists attempted to whip up demonstrators.

"I've said publicly before, it's sort of a witch's brew of extremists," he said.

None of the arrests have been in Arkansas, said Jonathan Ross, first assistant U.S. attorney for the state's Eastern District.

In order to find the culprits, the Justice Department's Joint Terrorism Task Forces has shifted its focus from self-radicalized jihadis to "groups like Antifa and Boogaloo boys and others that are involved in this activity," Barr said at Thursday morning's law enforcement forum.

Floyd's death while in police custody was a "ghastly event" that was "jarring for the nation," but it shouldn't trigger funding cuts for crime-fighting efforts, Barr said.

Public-safety officials understand "the need to address that kind of activity, the excessive use of force and the concerns of the African-American community about police abuse or being singled out or treated as second-class citizens," Barr said during a roundtable discussion at the Embassy Suites in Little Rock.

Slashing law enforcement funding "is the exact opposite direction that we have to go," Barr said. "We have to support, provide more support, more training, and more resources to the police, not defunding police."

When it comes to police violence, some of the data is positive, Barr said.

"When you actually look at these statistics, it's encouraging that the number of unarmed African-Americans shot by police last year were 10 compared to 40 five years ago, so the trend is [heading] the right direction. And of those 10, six were in the process of attacking the police at the time they were shot. So while we don't want anyone to die as a result of excess force, that problem was being addressed, the trend was positive," Barr said.

Barr was joined by Arkansas Attorney General Leslie Rutledge, U.S. Attorney Cody Hiland, U.S. Sen. Tom Cotton and U.S. Rep. French Hill, plus a couple of dozen others, including representatives of police departments, sheriffs' offices and a variety of state and federal agencies.

A majority of the participants were unmasked, though many were socially distancing themselves, sitting more than 6 feet apart.

Protesters stood outside the hotel waving signs while armed FBI agents in military-style camouflage looked on.

Motioning toward the security officials, Natalie James of Little Rock portrayed the men as potential threats.

"I don't like my business taxes, my personal taxes, going to militarize people to attack me," she said.

"I'm a thriving professional and to be tear-gassed is something that I never would have thought ever would have happened. I thought that only happened in a state of war," she said.

It's time to uproot white supremacy, she said.

Those participating in Thursday's discussion portrayed the meeting as helpful.

In addition to meeting with law enforcement officials, Barr had lunch at the Governor's Mansion with Gov. Asa Hutchinson, who is a former U.S. attorney and one-time head of the Drug Enforcement Administration.

Barr and state officials discussed a number of topics, including a state request that the Trump administration use the Defense Production Act "to help us in the national supply chain for our testing that is so critical to us in Arkansas and across the nation," Hutchinson said at a subsequent news conference.

During the meeting, Hutchinson referred to a federal court ruling that struck down work requirements for Arkansas Medicaid recipients. Barr told Hutchinson that the U.S. Department of Justice would file a petition for a writ of certiorari, asking the U.S. Supreme Court to review the case.

Barr thanked Cotton for inviting him to Arkansas and said the meeting with law enforcement officials had been productive.

"What struck me was the strength of the relationship that they have, the cooperation that exists and also, really, the very high caliber of the Arkansas law enforcement community. Many of the practices and proposals that are being made today out in the public debate are in fact here in place already in Arkansas," Barr said.

"While right now it can seem like a challenging time, I just want to say to all of our peace officers: 'We appreciate you. We respect you. We depend on you.' And that's the exact message the attorney general delivered to them this morning as well," Cotton said.

"It was good to brag about Arkansas in front of the attorney general," Hill said. "As the attorney general said, many of the best practices that are being talked about in the country on better community policing are practiced right here in Arkansas."

On Thursday afternoon, Barr also held a forum with business and civic leaders.

While he spoke, peaceful protesters held signs outside that said "Black Lives Matter," "Defund the Police" and "Power to the People."

Their cries of "No justice, no peace" penetrated the walls as the attorney general answered questions from the audience.

After the rocky departure of Attorney General Jeff Sessions after the 2018 midterm elections, President Donald Trump picked Barr as his replacement.

Barr's trip to Arkansas took place a day after he attended a forum with community leaders at a historically Black congregation in Columbia, S.C.

This was Barr's first visit to Arkansas since becoming the nation's 85th attorney general. 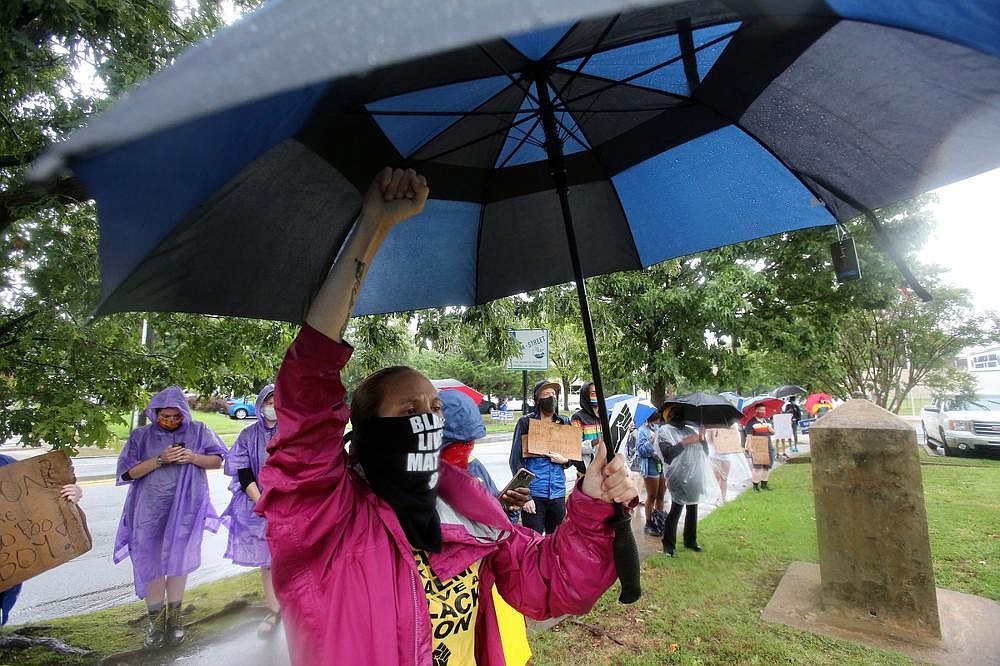 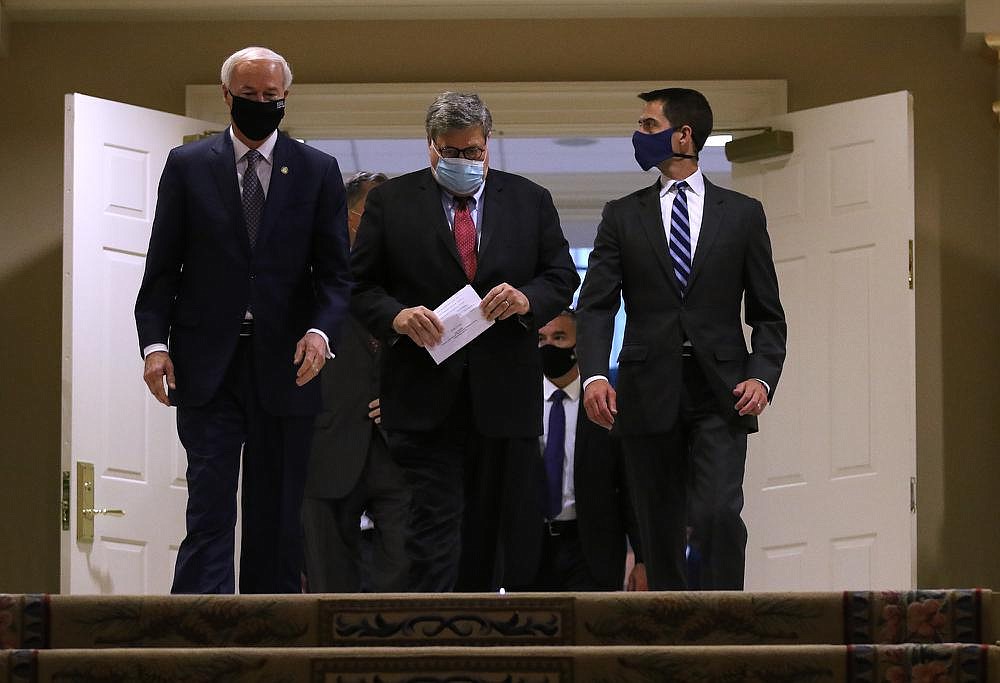