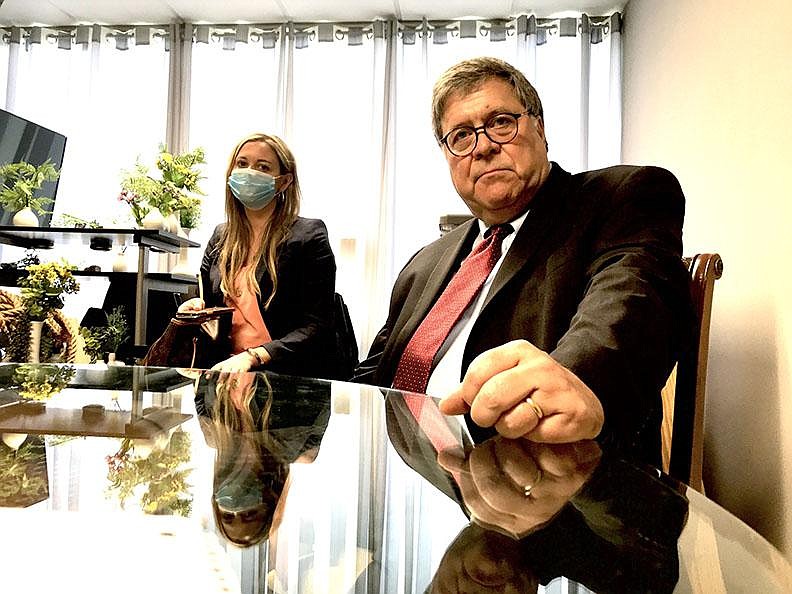 During Thursday's visit to Little Rock, U.S. Attorney General William Barr and U.S. Sen. Tom Cotton, R-Ark., were interviewed by the Arkansas Democrat-Gazette. This transcript was edited slightly for length and clarity.

Q. Do African Americans in 2020 enjoy equal justice under the law?

Barr: I think by and large, they do.

Q. You have talked about widespread problems, though, correct?

Q. Can you talk about those?

Barr: The problems I was referring to, I think, were, I think there's this phenomenon where law enforcement officers, or at least some law enforcement officers, in some areas, may not give the same benefit of the doubt to an African American male that they would to a white male under the circumstances. That's not necessarily racism. In some cases, we see it, African American police officers, treat African American suspects the same way. But I think, as Sen. Tim Scott has said, he's been pulled over, what, 18 times up on Capitol Hill. [Scott, R-S.C., is the only Black Republican in the U.S. Senate.] So that's a phenomenon that's there that it rankles the African American community and it's something that should be addressed.

Barr: Well, I think part of what they're doing is there are training programs that have been in effect that police agencies would like to have on their curriculum. Some do, but as I said before, a lot of this costs money. And so you're running up against tight budgets, efforts now to defund the police, and yet request that police be more understanding and more sensitive to these kinds of social issues when they're out policing?

Q. How big a problem are police unions? The mayor of Minneapolis, [Jacob Frey], thinks they're a big problem. [Frey told The New York Times last month that "The elephant in the room with regard to police reform is the police union.]

Barr: I think it depends on the union and the place. I think police unions do have an important role to play in many places. I think it is important because they do ensure that the individual police officer is treated fairly and with due process, and I think that is called for, especially in the environment we're in now where, in order to buy political peace, some people may be willing to throw individuals to the wolves where it's not necessarily really justified. So I think fairness to the individual is always paramount, and I think unions help achieve that. There are some unions, perhaps in some jurisdictions, that have so much power that it's very hard to get rid of bad police officers, and police managers of the police just don't think it's worth it. They don't want the hassle and the fight, and that's counterproductive if you're trying to clean up a force.

Q. You have said that you want to see the chokehold ended except if it's necessary because you're facing lethal force. The Democratic bill does that. The Republican bill doesn't do that. Would it be a good idea to just ban the chokehold except when lethal force is being faced?

Barr: I think generally, most people that I've talked to agree that, in concept, you should not allow the chokehold except as a response to lethal force. Except when lethal force is justified.

Q. Should it be banned?

Cotton: I think a ban in all but the circumstances where a lethal attack is underway is a reasonable step. Sen. Scott's bill, though, wants to have a sound evidentiary basis on which to make those decisions. It'd be one thing for a local police chief or a local sheriff or a local legislature to make those decisions for their officers, but when Congress acts nationwide, we always want, especially on those issues that are most intensely local, we want to make sure that we have a sound evidentiary basis. That may be where legislation ends up or the decision that most state and local governments take for their own forces, but Congress ought not act in a hasty, precipitous manner without a really solid evidentiary basis.

Q. You've talked about how divided the country is. Is there anything that can bring people together?

Barr: Honesty in the media.

Q. Talk about that.

Barr: I think that the media has become so monolithically partisan and is so committed to a narrative of their own narrative. There are a few exceptions, but the stories are not written based on fact. The stories are written based on a narrative so the facts are scrupulously avoided and things are cherry-picked in a way that presents a false view. And I think when you have that, it's a combustible situation. There's a large part of the country, whose voices are essentially disenfranchised. They're not being permitted to get their voice out in the public debate and when they do they're savaged and the media, frequently, is in the van[guard] of savaging them. The media has very largely abandoned liberal values, the values of actual debate to character assassination of people with whom they disagree.

Cotton: In late May and early June, you had CNN and MSNBC reporters standing in front of burning buildings and burning cars saying the protests are largely peaceful. And literally, cars and buildings are burning behind them. They're like Baghdad Bob denying the reality they see. The New York Times, they had to fire their editor because of an op-ed of mine they published. Every day it reads like it's a campus social justice seminar syllabus. Not an actual reporting of the news. The portrayal in the media, not in the Arkansas Democrat-Gazette, but on CNN and MSNBC and major papers in this country, has essentially become the media wing of the Democratic party and is trying to amplify and heighten the division and the acrimony that you see because they feel that it's to their political gain to beat the president in November.

Barr: My experience is that if I want any chance of fair coverage, I would go to the local media, not the national media.

Q. Sen. Cotton had called for maybe sending in the 101st Airborne [to quell unrest.] You ended up not doing that. How come?

Cotton: Well, to be exact, what I said was that it could be necessary. I wrote that on Monday June 1, the day coming out of a weekend of riots in which dozens of officers were injured in Washington, D.C. If order cannot be maintained, if rioters and looters are rampaging in the streets, that's why we have the Insurrection Act, that has been used time and time again to include the 101st Airborne right here in Little Rock in 1957.

Barr: Because we didn't think it was necessary to restore order in Washington, and it wasn't. People always have the benefit of hindsight. They're looking back and criticizing. But at the time, we didn't know what was coming. We had no idea of how big these things would be. We didn't know how violent they would be. So you make contingency plans in case something gets out of control. You make sure there are forces in hand that would be there if you need them. But we had about 10,000 federal law enforcement/National Guard people in D.C., and we felt that was enough.