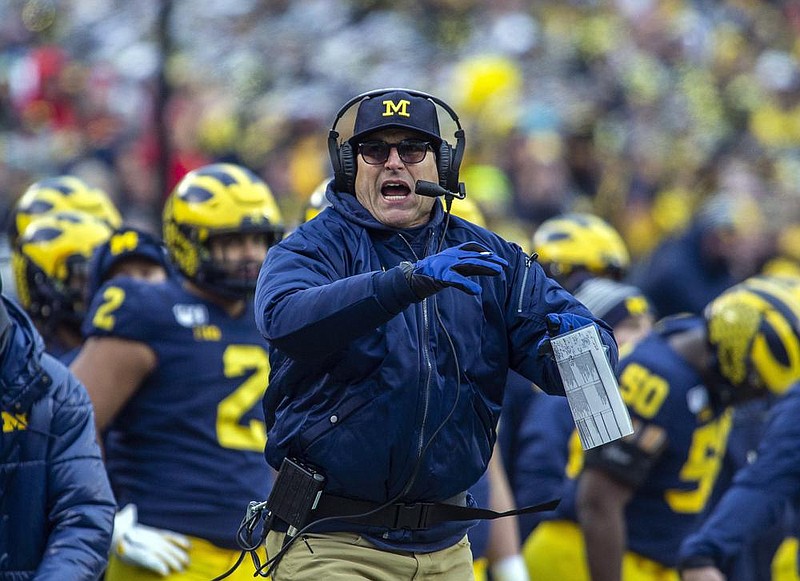 Michigan Coach Jim Harbaugh and the Wolverines will join the rest of the Big Ten in not playing nonconference games in football and several other sports this fall in a decision the league announced Thursday. (AP file photo)

The Big Ten Conference announced Thursday it will not play nonconference games in football and several other sports this fall, the most dramatic move yet by a power conference because of the coronavirus pandemic.

The league cited medical advice in making its decision and added ominously that the plan would be applied only "if the conference is able to participate in fall sports."

"As we continue to focus on how to play this season in a safe and responsible way, based on the best advice of medical experts, we are also prepared not to play in order to ensure the health, safety and wellness of our student-athletes should the circumstances so dictate," the league said.

There has been deep unease that the pandemic will deal a blow to fall sports after wiping out hundreds of games this past spring. More than a dozen schools have reported positive tests for the virus among athletes in the past month but the bad news picked up this week as the Ivy League canceled all fall sports and Stanford announced it was cutting 11 varsity sports.

The Big Ten decision is the biggest yet because Bowl Subdivision football games -- more than 40 of them, all moneymakers in different ways -- were simply erased. And the move didn't wash away fears the entire fall season could be in jeopardy.

"I am really concerned, that is the question of the day," Ohio State Athletic Director Gene Smith said on a conference call after the announcement. "I was cautiously optimistic. I'm not even there now."

"By limiting competition to other Big Ten institutions, the conference will have the greatest flexibility to adjust its own operations throughout the season and make quick decisions in real-time based on the most current evolving medical advice and the fluid nature of the pandemic," the Big Ten said.

The other big conferences, the SEC, ACC, Big 12 and Pac-12, have all indicated they intend to play fall sports.

"The Big Ten decisions are interesting and provide additional information to inform our discussions," Big 12 commissioner Bob Bowlsby said. " We plan to continue to prepare for all available scenarios until we are informed that some are no longer viable."

Arkansas State University was scheduled to play a nonconference football game at Michigan on Sept. 19.

"There were no conversations between Arkansas State and Michigan about canceling our football game on Sept. 19, 2020," ASU said in an emailed statement to the Arkansas Democrat-Gazette on Thursday. "We are evaluating all options in light of today's Big Ten Conference announcement."

Much of the pain will be felt at smaller schools that lean heavily on the big-money games to help fund their athletic budgets. Hours before the Big Ten announcement, Northern Iowa, which will lose a Sept. 5 game at Iowa, said it expected an athletics budget shortfall to exceed $1 million.

"Ten FBS conferences have signed a college football playoff agreement with an expectation that we will work together for the good of college football," Moosbrugger said. "If we are to solve these challenges and be truly dedicated to protecting the health and safety of our student-athletes, we need to do a better job of working together."

Illinois State was scheduled to play at Illinois on Sept. 4.

"Obviously, we are disappointed by the decision, as there are many people affiliated with both universities that have had this game circled on their calendars for a long time," Illinois State Athletic Director Larry Lyons said. He said the budget is in a "constant state of flux," but there are no plans to cut sports.

The Big Ten said it would release detailed schedules later and continue to evaluate other sports. The league said its schools will honor scholarships for athletes who choose not to compete in the upcoming academic year because of concerns about the coronavirus.

In the SEC, Missouri Athletic Director Jim Sterk was asked about the possible rationale for a conference-only schedule.

"Probably, it's a comfort level of how protocols are being enacted, how testing is done and then keeping it within that family, if you will -- your expanded social circle or social pod," Sterk said. "You might be able to control things more that way, or feel like you can, anyway versus the unknown of people coming from outside our 11 states." 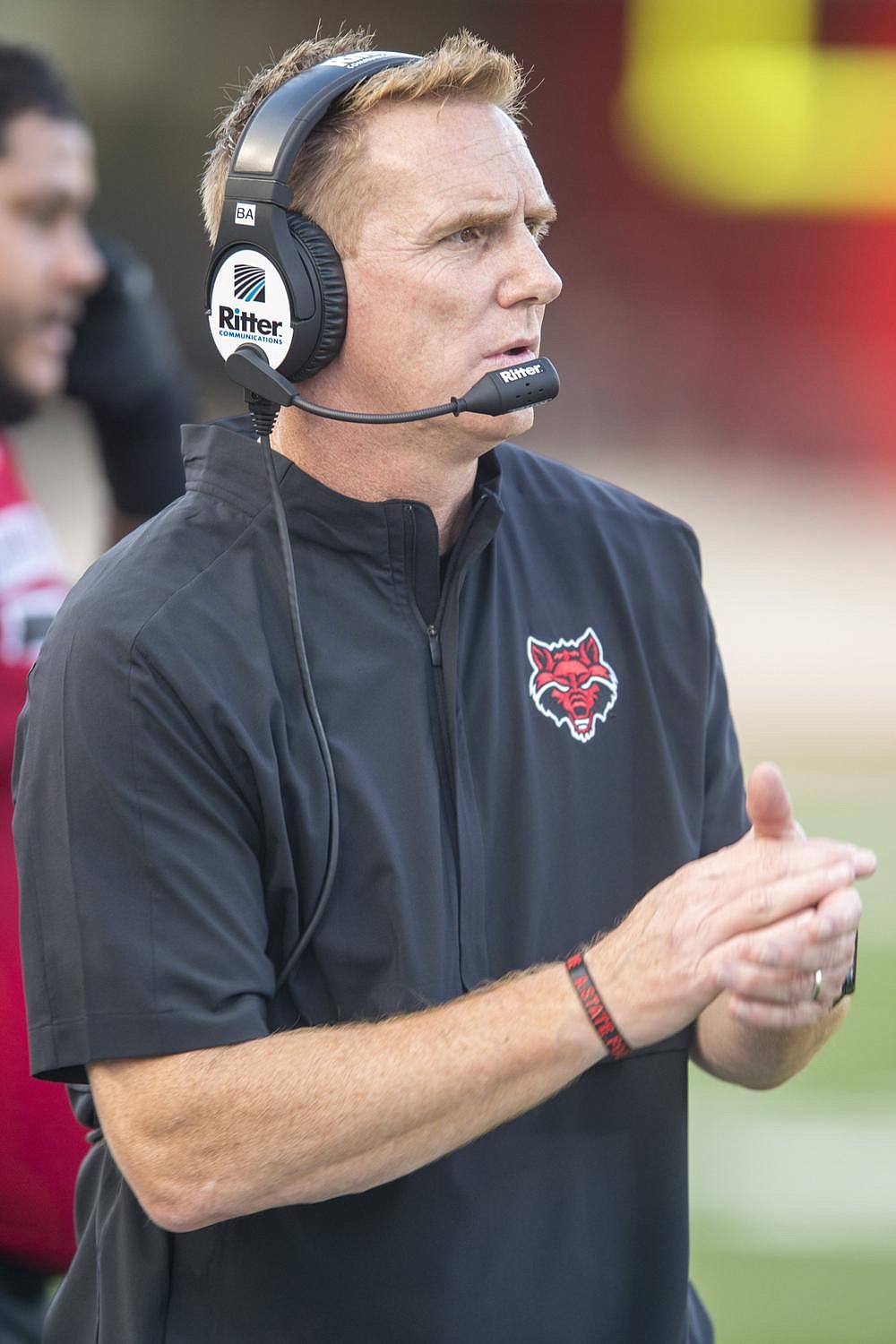 Coach Blake Anderson and the Arkansas State University football team were scheduled to play at Michigan on Sept. 19, but that won’t happen after Thursday’s announcement that the Big Ten will play conference games only for the 2020 season. (Democrat-Gazette file photo) 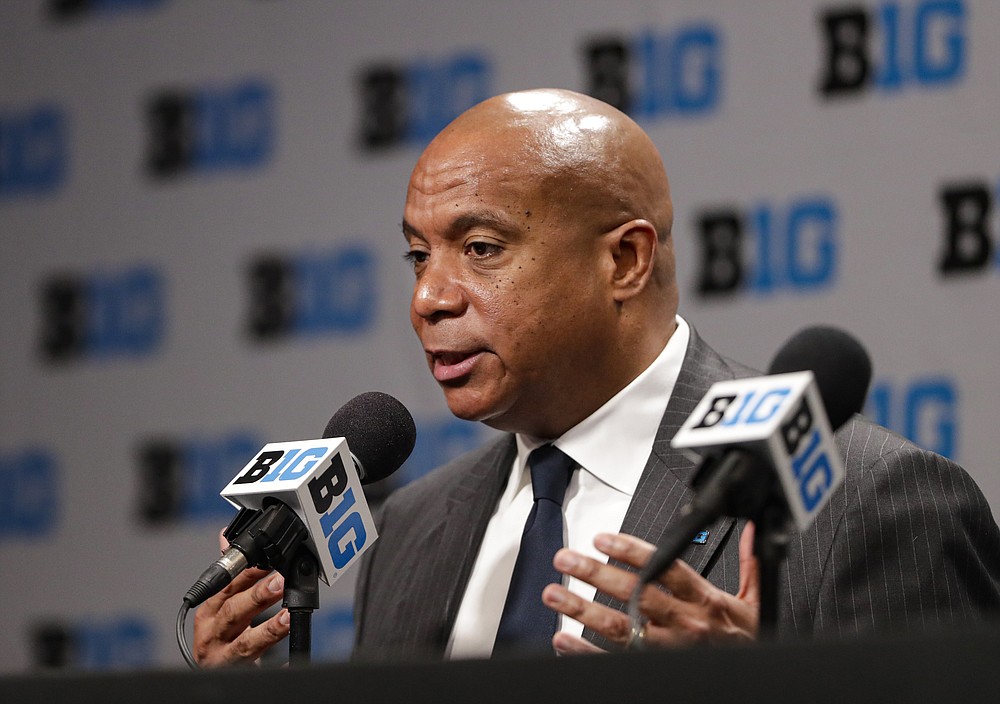 FILE - In this March 12, 2020, file photo, Big Ten Commissioner Kevin Warren addresses the media in Indianapolis after it was announced that the remainder of the Big Ten Conference men's basketball tournament had been canceled. Warren, the first black commissioner of a Power Five conference, is creating a coalition to give the league's athletes a platform to voice their concerns about racism. Warren announced Monday, June 1, 2020, the formation of the Big Ten Anti-Hate and Anti-Racism Coalition, with athletes, coaches, athletic director and university chancellors and presidents. (AP Photo/Michael Conroy, File)
ADVERTISEMENT