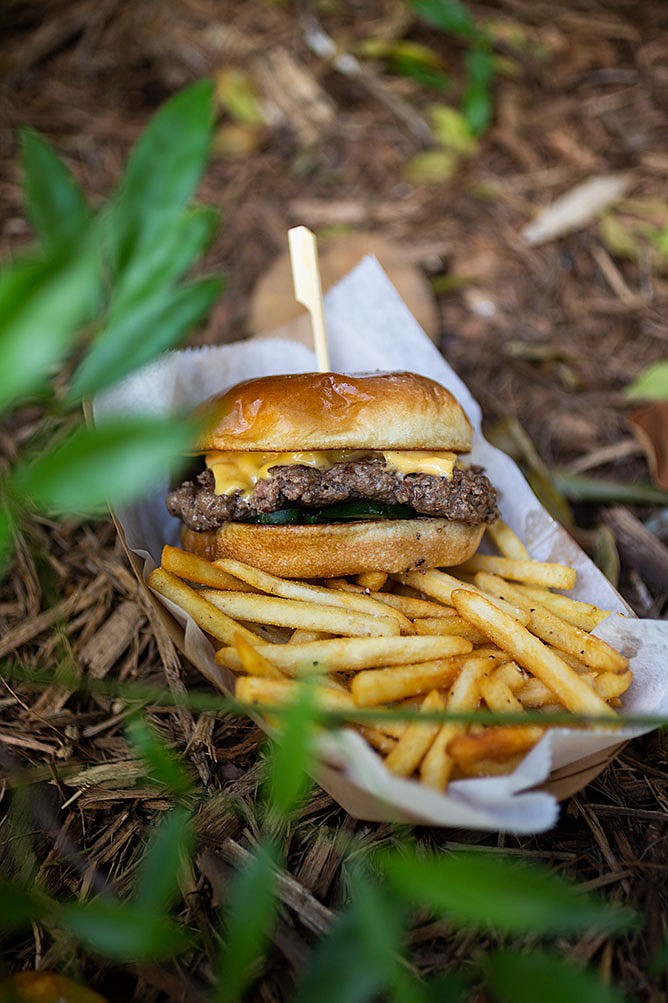 “You just have to wake up and take what comes next,” Gilbert Alaquinez says. We’re sitting a bench-length apart in downtown Little Rock’s Bernice Garden, where Gilbert has just finished serving lunch out of his food truck. “We didn’t see this coming. No one did. Who knows what will be next.”

Our conversation had started on a happy note. Gilbert talked openly of his childhood in San Antonio, of learning to cook from his grandmothers—one freewheeling with a we’ll-make-it-work attitude, the other stern and didactic. He describes how he still feels the presence of these two women in his kitchens through his own work, even now as he transitions into his full-time role with The Lab Food Truck. But even the memory of his grandmothers couldn’t prepare him for the coronavirus.

“In some ways, [the food truck] is better prepared for this new normal,” he says almost sheepishly, his gaze steady on the swaying flowers. As dining rooms close across the country, the business of running a food truck has been largely unchanged. From our bench in Bernice Garden, we can see the front doors of the restaurants that dot South Main Street, each one fighting the pandemic and its effect on their bottom line in their own way. “We’ve got such a great mix of restaurants here [in Little Rock], and I don’t want to see any of them close.”

The renaissance that’s taken place in Little Rock’s dining scene over the past decade has made national news. Publications such as Forbes Travel Journal and Southern Living have begun touting Little Rock as everything from “A top 5 secret foodie city,” to “America’s next hottest foodie city,” and “A Southern city that every food lover should visit now.” What the pandemic’s final toll on the local restaurant industry will be may take months, if not years, to fully assess, and until then, chefs and restaurant workers across the city are forced to, as Gilbert said, wake up and take what comes next.

Gilbert knows how lucky he is, though as he recounts the past few months’ events, he seems almost self conscious about the serendipity. Two months ago, he’d been the executive chef at Kemuri, the neighborhood sushi and robata restaurant in Little Rock’s Hillcrest neighborhood. Soon after dining rooms were closed across the state, he found himself, like hundreds of thousands of other Arkansans, out of a job. But for Gilbert, it was an unexpected blessing. It allowed him to devote his full energy to Kemuri’s unofficial side project: The Lab Food Truck.

Initially created as a way to test new recipes for a new concept from Gilbert and Kemuri’s owner, The Lab is now Gilbert’s livelihood and, at a time when success matters more than ever, it’s what’s given him the freedom to fail.

It might look like a burger—but it’s oh-so-much more. Mostly ‘cause of those miso-glazed onions, tomato jam, and … Just trust us on this one.

“That’s what you have to get about The Lab,” he says after telling me the story of a muffuletta sandwich that ranks as the worst-performing menu item in the truck’s short history. “If something doesn’t work, you just scrap it and come back with something new next week.” That sense of experimentation is what drove him to call his truck The Lab. He didn’t want to run the risk of stifling himself behind a catchy-though-food-specific name. He worried that naming his truck after tacos or ramen or burgers would pigeonhole him into that food, an idea that’s the opposite of everything The Lab is about. “If you stake your name on something like biscuits or waffles, or even ramen, good luck ever taking it off your menu.”

All of Gilbert’s experimenting has landed him a few hits, items that have won themselves permanent places on his short menu. Japanese ramen, a food Gilbert has long been passionate about, is listed just above an all-American cheeseburger on the truck’s sandwich-board menu.

Gilbert credits his love of borrowing from other cultures to the five years he spent as executive chef of 42 Bar and Table at the William J. Clinton Presidential Center. There, Gilbert not only had to create menus that would satisfy globetrotting tourists, but also plan and execute the restaurant’s monthly “Around the World” dinner, a dinner series that is as old as the center itself and explores a different culture through its cuisine each month.

Days of research went into each month’s menu, and it didn’t take Gilbert long to see the ways in which global history played out through food. He saw the ways the transatlantic slave trade ferried ideas that would go on to shape the pantheon of Southern food from Africa to North America, and the ways in which Spanish and French techniques and ingredients seeped into Cajun and Creole cuisines as the two countries traded control of New Orleans. “There’s so much connection in food,” he says. Anytime I can add something from another culture, I’m going to try.” He hopes that meal by meal, he pushes the palates of his guests into uncharted flavors. That all-American hamburger, for example, uses miso onions, gojuchang mayonnaise and classic American cheese to expand on the idea of just what it means to be all-American.

The flexibility of The Lab, its intentional refusal to stick to any single trend or cuisine, acts as a blank page for Gilbert, allowing him to tug at the threads of culinary ideas and to see, days or even weeks later, where they take him. If his years at 42 had opened his eyes to the infinite complexity and connectedness of global cuisines, his months at The Lab have, so far, given him the freedom to be a vagabond of flavor, sailing effortlessly between the culinary ports of the world, learning, sampling and sharing his findings with his guests.

I ask him if there’s any chance of him using The Lab for its original purpose and taking the most popular menu items and opening up a brick and mortar restaurant. “When [the pandemic] ends,” he says before laughing at himself, because we both know that the other is thinking, Whenever that is. “Maybe, I think, I hope” he corrects himself, “that by then, things in [the restaurant industry] are different than we have now.”

The restaurant industry is notoriously grueling, with personality clashes in the kitchen and at the tables. “I’ve been in those kitchens,” Gilbert says. “I’ve gone into walk-ins and cried.” He hopes that going forward, kitchens are imbued with a newfound sense of kindness, one that he even admits he’s struggled with when it comes to younger members of his teams. It’s in those moments, though, that he tries to channel his grandmothers, to lean toward education instead of admonishment. “I’ve seen the light [in a young chef’s] eye just go out after getting yelled at,” he says, “and I never want to do that to someone.”

But Gilbert hopes that a post-COVID-19 world means that diners have also had a moment of introspection. “Can you imagine walking into an architect’s office and saying, I don’t know about those arches? But people think nothing of making changes to a restaurant’s food.” So much time goes into each dish, sourcing the best ingredients and perfecting the presentation that he laments the frequency with which a chef’s hard work is altered. “If there’s a relationship between the chef and the diner, I wish it was a more trusting one. We’re experts. We know what we’re doing.”

He admits that during the pandemic, people’s attitudes seem to have dissipated. He can’t say for certain if it’s a result of the existential dread we all feel or a change of personality brought on by the change of venue (If the kitchen is on wheels, how highfalutin can you be?), but it’s a welcome one. The restaurant life is a hard one, and he doesn’t see that changing, though he does hope it becomes a little more fun.

Best dishes? The Lab’s take on a classic burger might just be our new favorite. And those chorizo and egg tacos? We could eat those all day.

Kid-friendly? It’s not not kid-friendly, but after having the kids at home every day for four months, we totally won’t judge you if you leave them at home for this one.