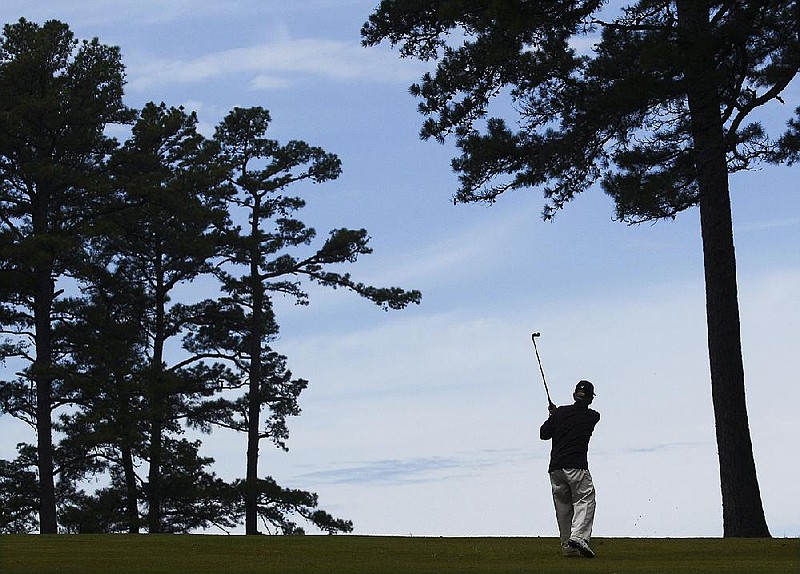 Arkansas Democrat-Gazette/BENJAMIN KRAIN --4/21/2016-- A golfer plays at War Memorial Golf Course on Thursday. The Little Rock Parks and Recreation Department operates the public course and plans to convert the grass on the greens to Champion Ultradwarf Bermudagrass over the summer months and will have to close the course from May 9 through August 12 to make the improvements. The city's other public golf courses, Rebsamen and Hindman, have already converted to Championship Ultradwarf Bermudagrass, and this will be the first upgrade to War Memorial in more than 20 years. ( Benjamin Krain)

Little Rock is seeking a vendor to provide “golf entertainment” on an 18-acre portion of War Memorial Park, according to a request for proposals.

The park was formerly the site of the War Memorial golf course, which was closed last summer due to city budget cuts. Mayor Frank Scott Jr. has touted redesigning the park as an iconic public space in the center of the city.

A request for proposals for an 18-acre lease of War Memorial Park was issued July 1, and proposals are due July 22. The document notes that off-course participation in golf increased by almost 10% in 2018,in part because of golf entertainment facilities.

Scott’s office said in early 2019 that he had met with Topgolf, a golf and entertainment chain, and discussed real estate options with hopes of netting the Houston-based company.

Topgolf opened its first Arkansas location in Rogers in March, which is an 11-acre facility. The chain combines a sports bar atmosphere with a nontraditional golf game, where golfers hit sensors across the green and see their points in virtual displays.

Stephanie Jackson, spokeswoman for the mayor's office, said the request for proposals was not tailored specifically to TopGolf, and that it was written so multiple companies may submit a proposal. Jackson responded in a statement after news reports surfaced about the request.

"The city hopes and anticipates that it will receive multiple proposals from businesses interested in creating a golf entertainment or entertainment leisure site" at the park, she said in an email.

Jackson noted that a task force did not specifically recommend a golf entertainment site when it convened to come up with new recreational opportunities for the park. However, she said, such a site would still align with the task force's recommendations to create a multipurpose park.