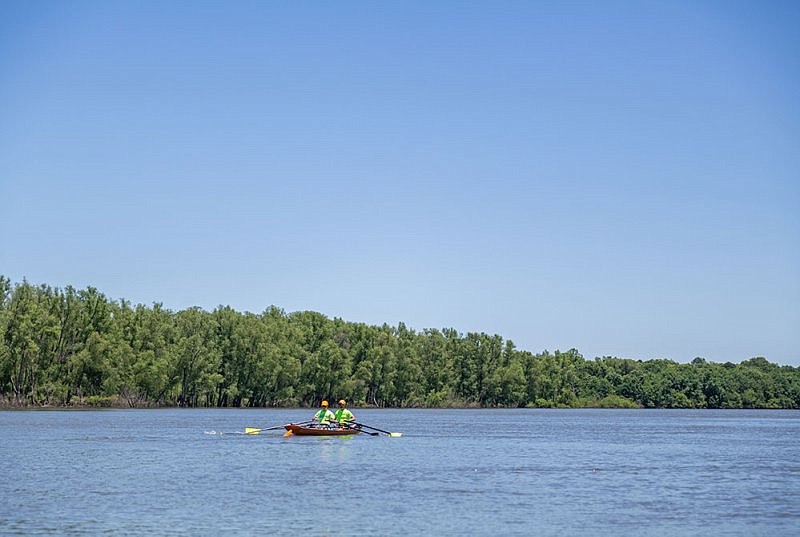 “THE LINE outside Madison Square Garden started to form at 5:30 p.m., just as an orange autumn sun was setting in New York City on Halloween Eve, 1912 …”

As the water splashed against the sides of the boat, the man and his son listened as the audiobook’s disembodied narrator, speaking from the portable speaker, told the story of President Teddy Roosevelt’s defeat as a third-party candidate in 1912. Angling for a third term, the famously strong-willed politician had thrown his name into the hat, only to be very publicly humbled when the electorate voted to send him packing. In the aftermath, the voice went on to say, Roosevelt responded to the setback as only he could, by setting out on “a self-imposed journey to explore the River of Doubt, a churning, ink-black tributary of the Amazon that winds nearly a thousand miles through the dense Brazilian rainforest.”

For the next several hours, Chad Crank and his son, Oliver, 14, listened as the events of more than a century before unfolded in author Candice Millard’s River of Doubt: Theodore Roosevelt’s Darkest Journey: how the former president had mounted an expedition to the then-uncharted river that would later bear his name—and consequently come uncomfortably close to the brink of death. Comparatively speaking, their river, the Arkansas, was a much tamer force of nature than that faced by the 26th U.S. president on the River of Doubt (or Rio da Dúvida), yet the pair’s undertaking wasn’t without its own challenges.

That morning, when they set out from Fort Smith to Dardanelle, they’d already rowed roughly a hundred miles of the river on two previous outings. In that time, they’d navigated locks and dams, run aground of a buoy, started rotating who was on the oars, first by time and then by 2-mile increments. In the miles to come, they’d deal with a wrist injury, impenetrable fog, 3- to 5-foot rolling waves created by passing barges and so forth. This is all because the father-son duo from Little Rock, seventh and eighth-generation Arkansans, respectively, had decided they wanted to get a new perspective on their state—by paddling all 310 miles of the eponymous river that flows within the state’s borders.

When the boxes arrived at the house in fall 2018—one a 35-pound cubic foot; the other a featherweight Goliath measuring 8 feet long and 3 feet wide, but just 90 pounds and 2 inches thick—Oliver, then 13, had opened the lids and marveled at the sight. There, in some 113 pieces of Okoume African mahogany, he got his first look at the boat they’d be taking down the river: a sliding-seat tandem wherry (or light rowboat with seats for two) measuring nearly 20 feet in length. Over the course of the next several weeks, he and his father set out to assemble the boat, transforming the family garage into a workshop. Each evening, they’d use epoxy to piece together the hull, the interior structure, the planks. Then, when those were dry, they’d continue the process, until the boat gradually began to take shape.

Although the plan was ambitious, it wasn’t entirely without precedent—and was, in fact, almost an extension of a past shared experience. A few years before, Oliver, then 11, had suggested that he and his father try to bike across the state. At the time, they were on a globe-trotting family sabbatical, and seeing as they’d already seen so much of the world, Chad decided it’d be worth giving the bike trip a shot—to take a closer look at their home state. On Nov. 26, just a few days after returning to Arkansas, they’d packed up some camping gear and their bikes and gotten a one-way ticket on a Greyhound bound for Fort Smith. On Dec. 12, 2016, after riding 305 miles, they finished their journey.

This new endeavor, however, was somewhat different in terms of the challenges it posed. Although Oliver had racked up a few years of rowing experience through Rock City Rowing in Little Rock, Chad had some extra catching up to do. Despite having done his share of canoeing, sailing and rafting, this style of rowing was a first. In fact, when the boat was finally completed and they launched it for a test run at Two Rivers Park in Little Rock, Chad’s rowing experience in sliding-seat rowing rigs had been limited to tutorials viewed on YouTube. 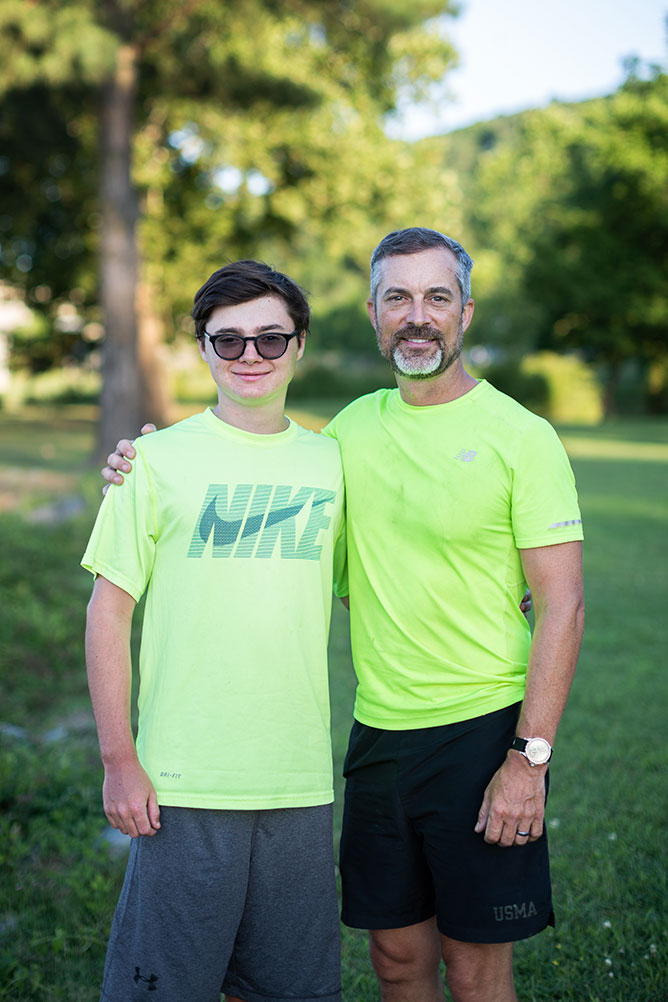 For the next several months, during the summer of 2019, in the boat they’d christened “RHC” in honor of Chad’s father, Robert, Chad taught himself to row. No doubt, that practical skill set would be necessary—but even more important was a knowledge of the river, and the breadth of the endeavor they were taking on. In addition to having a long list of obstacles common to most rivers—whirlpools, jetties, other watercraft, gators—the Arkansas River’s role as a major transportation thoroughfare created its own set of concerns: During the course of their journey, Chad and Oliver would not only be sharing the river with mammoth shipping barges that shuttle up and down the river, they’d be passing through the same system of locks and dams those very barges use, the McClellan-Kerr Arkansas River Navigation System—the system that for the past several decades has made all travel along the river possible (or at least predictable).

To read accounts of the Arkansas River from before it was corralled, one gets the sense that it wouldn’t have been altogether different from other less-navigable stretches of water. In one of the earlier written accounts of the Arkansas River, from 1721-22, French explorer Bernard De La Harpe writes that “the currents are almost equal [to the Mississippi],” (though in the same sentence he goes on to say that “there is no river in this province more beautiful and more navigable”). In the years that followed, as the Arkansas became more integral to state commerce—particularly as a link to the Mississippi—the river’s often erratic nature was brought into sharper relief.

As Edward N. Andrus notes in his 2019 dissertation, “The River Gave and the River Hath Taken Away: How the Arkansas River Shaped the Course of Arkansas History,” “The river became increasingly important as a transportation highway and grew in economic importance. To the dismay of many planters and steamboat captains, the river did not always cooperate. Floods and droughts caused the navigability of the river to fluctuate widely.”

To oversimplify the problem and, ultimately, the solution: The challenges were such that, when increased development was stymied and undercut the river’s unruliness—as exemplified by, say, the devastating Flood of 1927—a many-staged, decades-long endeavor to harness the river was undertaken, eventually culminating in the McClellan-Kerr Arkansas River Navigation System (or MKARNS). Since the system was completed and put into use in the early ’70s, countless watercraft have passed along the Arkansas—though it seems fair to say that relatively few have had a chance to see those feats of engineering as intimately as Chad and Oliver Crank—or, for that matter, the landscape itself.

In the course of their travels, they watched as the Ouachitas were calmed and gave way to the cypress-studded bayous of the Delta, as glimmers of humanity sparked up and faded with the passing of denser and lesser-populated areas. Of course, much of that time, they say, was spent focused on rowing, on avoiding potential hazards and resting. The time was also filled with the rambling, unrecallable conversations of a father and son getting to know each other a little better on the water.

“Tom’s most well now, and got his bullet around his neck on a watch-guard for a watch, and is always seeing what time it is, and so there ain’t nothing more to write about, and I am rotten glad of it, because if I’d a knowed what a trouble it was to make a book I wouldn’t a tackled it, and ain’t a-going to no more …” 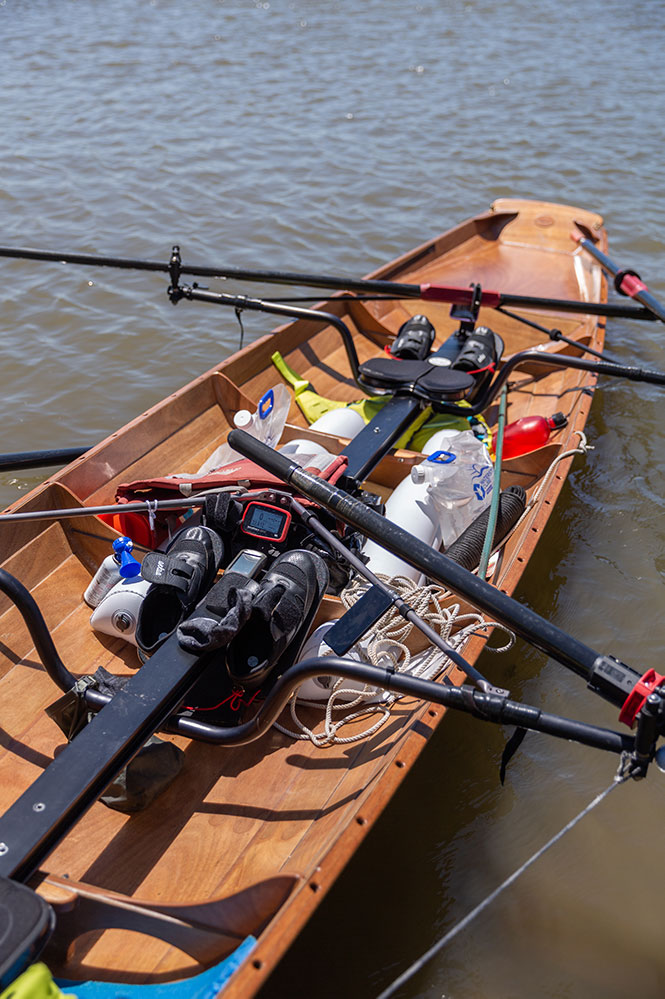 It was around noon on June 12, 2020, and the audiobook’s narrator was reading the final lines of The Adventures of Huckleberry Finn. That morning, at 9 a.m., Chad and Oliver had launched the boat from near Pendleton, marking the first time they’d been able to get on the water since April. It was a warm day, then 86 degrees and getting warmer, without a cloud in the sky. Plumes of textured green bracketed both sides of the river. Dressed in dayglo colors, they were easily seen from a distance, their torsos neon yellow, their hats the orange of newly purchased traffic cones.

In the coming moments, there’d be plenty of reason for excitement: While passing through the Arkansas Post Canal, they turned their eyes to the trees, and there, no more than 15 feet above them, was a bald eagle. It was a truly awesome sight (as was the scaly 13ish-foot “log” with a tail and eyes floating unseen just behind them). But it wasn’t just the wildlife sightings (and lack thereof). At that point, after passing through the Arkansas Post Canal, they’d completed roughly 295 miles of the river. They were nearly done, with just over 10 miles left to row.

This last stretch, however, would be different from what they’d done previously. Because of the presence of a hydroelectric dam on the last stretch of the Arkansas River, the pair would have to finish their journey on the White. It was a slightly wilder river, its flow more condensed. Aside from a fading houseboat and a barge-towing tug named Cheryl Stegbauer, there wasn’t much in the way of humanity—at least not until they reached the final lock. There, they found a feat of engineering—concrete walls that rose from the water, a concrete tower emblazoned with the name Montgomery Point Lock and Dam, a $237 million underwater system of hydraulically powered gates that can be raised and lowered to control water flow—and then they saw something even more awesome: Well beyond the lock and the mouth of the channel, they could see the sandy banks of the Mississippi River.

In the days to come, they’d return to their normal lives, heading up to the Buffalo for Mom’s birthday, passing over the Interstate-430 bridge and giving each other a subtle fist bump, an acknowledgment of the journey they’d just completed. But for the time, in this moment, as they rowed to the south shore, onto a grassy bank just beyond the concrete lock, they weren’t thinking too far ahead or listening to the stories told about other adventures. In that moment, as the boat landed, their own adventure was all they needed.