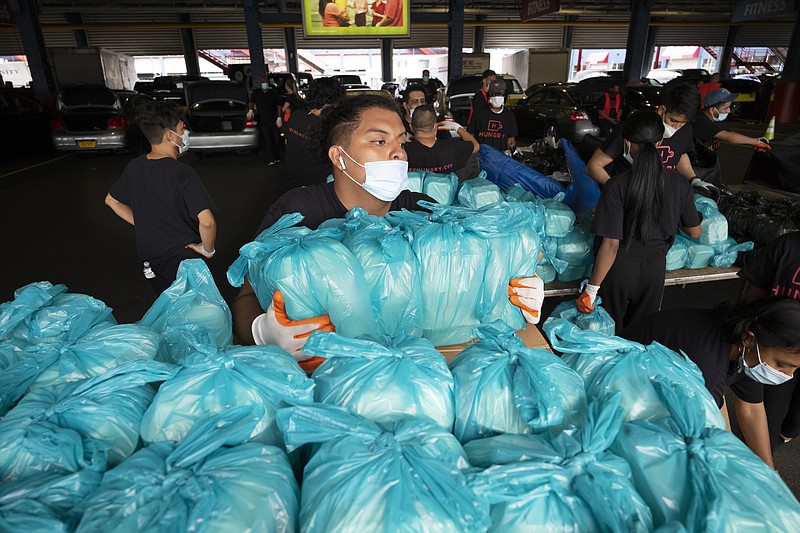 A worker moves bags of prepackaged meals to a sorting table where they will be loaded into insulated containers for delivery to needy families in New York, Tuesday, July 7, 2020. Catering startup HUNGRY originally served well-heeled office workers but with the downturn of the economy during the coronavirus pandemic it's now feeding the stuck-at-home elderly and low-income kids.(AP Photo/Mark Lennihan)

NEW YORK -- When it was started in 2017, the catering tech platform Hungry had one customer in mind: well-heeled office workers.

The goal was to take delicious meals to places like Microsoft, Amazon and Google by creating networks of chefs and deliverers. Hungry was going to be the Uber of catering. Jay-Z was a fan.

Then came the global pandemic.

All those gleaming offices -- the lifeblood of the company -- were shuttered. "There couldn't have been a worse thing for our business than that," said co-founder and Chief Operating Officer Eman Pahlavani.

But Hungry didn't go under. It pivoted.

These days, the company's customers are far different from the original targets. Now it's feeding the elderly and low-income kids. Business is better than ever.

"The best ideas come out of necessity and innovation," Pahlavani said. "There's always a way to get out of a bad situation."

Hungry began in the Washington, D.C., area hoping to make office lunches better and to take a bite out of the $60 billion catering market.

Thai food, jerk chicken, barbecue, fusion -- all of it was prepared by 200 independent chefs in their own kitchens and delivered by trained servers, connected by the company's high-tech delivery algorithms.

Hungry expanded to New York, Boston, Atlanta, Philadelphia, and the Texas cities of Dallas and Austin. It donated a meal for every two sold. This spring, it landed $20 million in Series B funding.

Investors included Atlanta Falcons running back Todd Gurley, comedian Kevin Hart and "Top Chef" judge Tom Colicchio. Brandon Crowe, Jay-Z's personal chef, was on board, as was the rapper. The company was valued at $100 million.

"Our world domination plans to provide revenue to chefs trying to make it went down the drain in about one week," Pahlavani said. "It broke my heart when covid hit, and we knew our chefs were going to get hit the hardest."

Other food tech sites have pivoted during these trying times, including Freshly, which donated $500,000 to Meals on Wheels, and Sweetgreen, which delivered free food to hospital workers and medical personnel. But Hungry -- after donating more than half a million meals to first responders -- ripped up its business model.

"We decided, let's innovate our way out of this thing," Pahlavani said. "We said, 'Let's chip in and figure out how we can do this and help people and help cities out while also keeping the lights on here at home.'"

New York City tapped Hungry along with some 60 other vendors to ensure that no New Yorker goes hungry. With its help, the city is providing 1.5 million meals a day to those with food insecurity or vulnerability to covid-19.

"We've been really thrilled to see the way that caterers and restaurant groups and farm consortiums have really stepped up," said Joshua Goodman, the city's assistant commissioner for Public Affairs.

Hungry created a food logistics hub at the city's Chelsea Piers and hired hundreds of drivers. It now delivers 10,000 meals a day.

"We're now delivering food at cheaper rates than nonprofits were that were in the space just because we use the tech infrastructure in our other world, our corporate catering world," Pahlavani said. "We're able to execute for the city at a more reliable rate, but at a cheaper cost."

On top of contact-less service, Hungry drivers are checking in on residents. The company said one rescued an elderly customer from being trapped in an elevator, and another found someone passed out on the floor. Drivers are also delivering raw ingredients, like milk and potatoes.

Charlotte Jenkins, a Hungry site leader in New York, said she's been inspired by the company's drive to keep going -- both feeding and employing people.

"Giving back is so important to me, and it's great to have the company's values so in line with that," she said. "It's been absolutely awesome watching the company pivot and also being a part of it, too. It's really inspiring how they've been able to change so much and be able to do so much good."

Municipalities and celebrities have reached out as well. Hart opened his checkbook and asked Hungry to feed the elderly in his hometown of Philadelphia. The NFL's Bobby Wagner did the same thing in Seattle.

"This is a very good marriage between governments wanting to do something good, and the private sector being able to hustle and be nimble enough to make it happen," Pahlavani said.

"They've been very, very much on board with it -- just performing at such a high level. Honestly, at even higher level than they did when they were feeding corporate offices because I think the passion kicks in," Pahlavani said.

Is it possible to trade wealthy customers for low-income ones and still make a profit? Pahlavani said Hungry is having its most profitable months ever, and there's a new urgency to its mission.

"The name of the company is Hungry. How do you feed those who are hungry in this country?" he asked. "Amazing that we still have this problem in America. Let's figure out how to eradicate this problem." 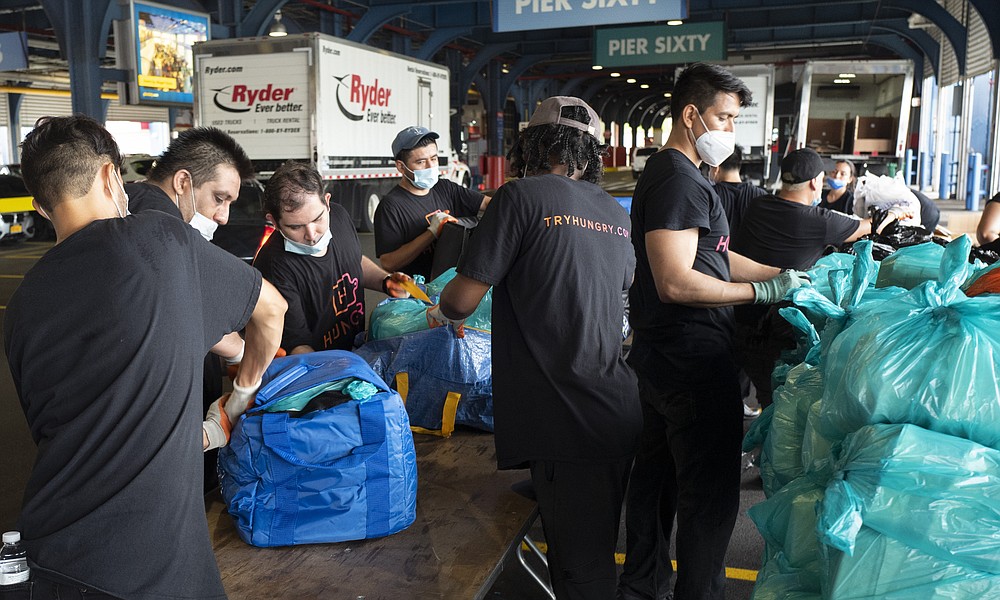 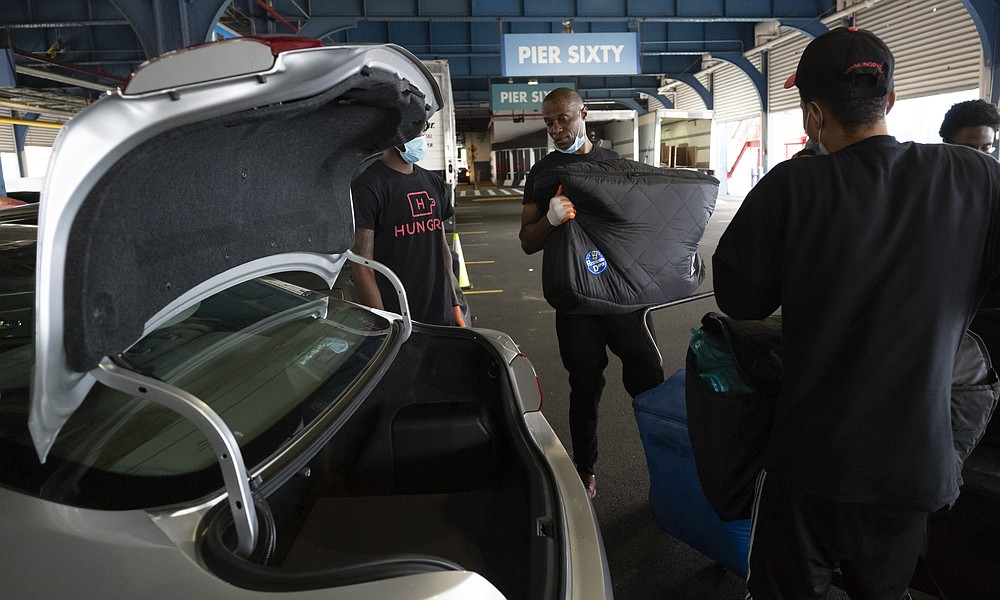 A worker loads an insulated container of prepackaged meals into a car for delivery to needy families in New York, Tuesday, July 7, 2020. Catering startup HUNGRY is feeding the stuck-at-home elderly and low-income kids, reaching 10,000 homes a day. (AP Photo/Mark Lennihan) 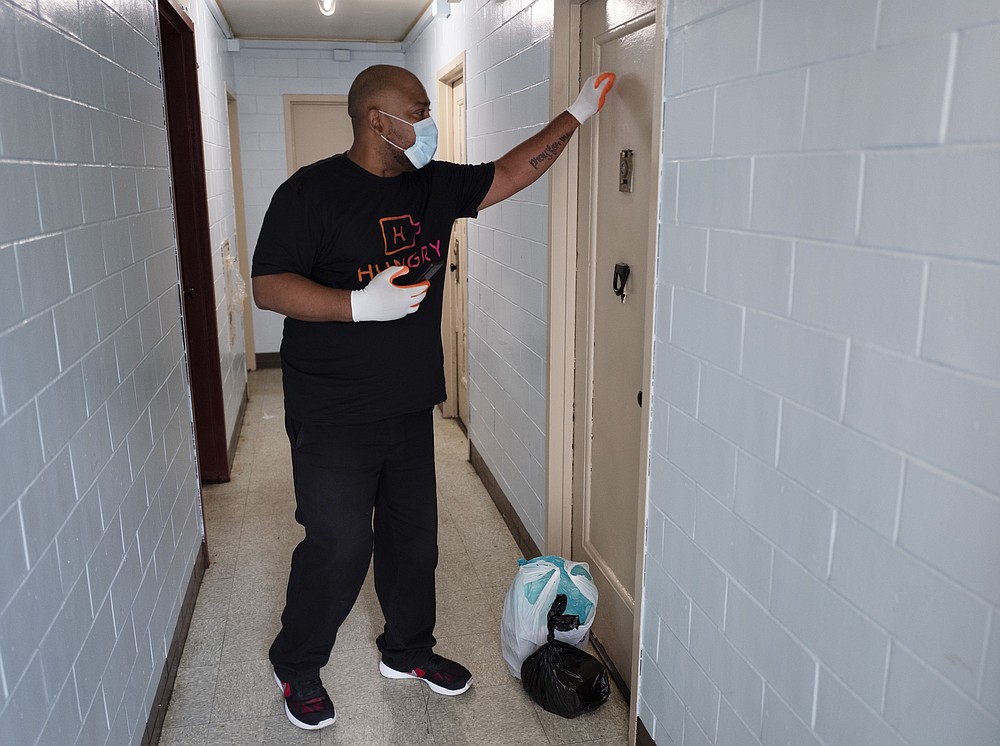 Driver Frank Robinson knocks on an apartment door as he delivers prepackaged meals for breakfast, lunch and dinner in Brooklyn, Tuesday, July 7, 2020, in New York. The city provides HUNGRY with a list of names of those who have requested food subsidies. (AP Photo/Mark Lennihan) 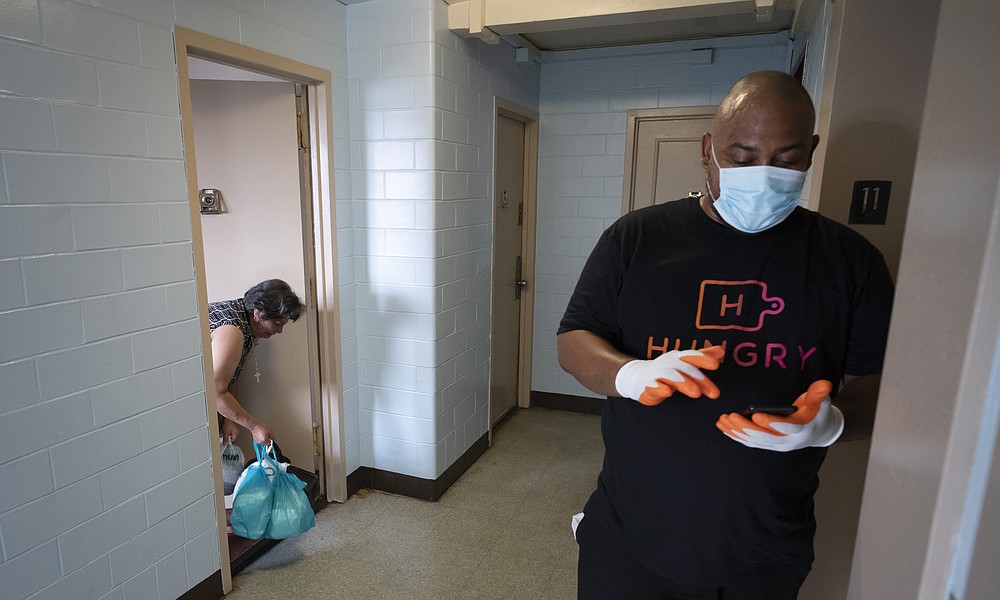 Driver Frank Robinson confirms on his smart phone a delivery of food to a Brooklyn resident, left, Tuesday, July 7, 2020, in New York. The HUNGRY program "puts food on their table and it helps me to keep food on my table," says Robinson. (AP Photo/Mark Lennihan) 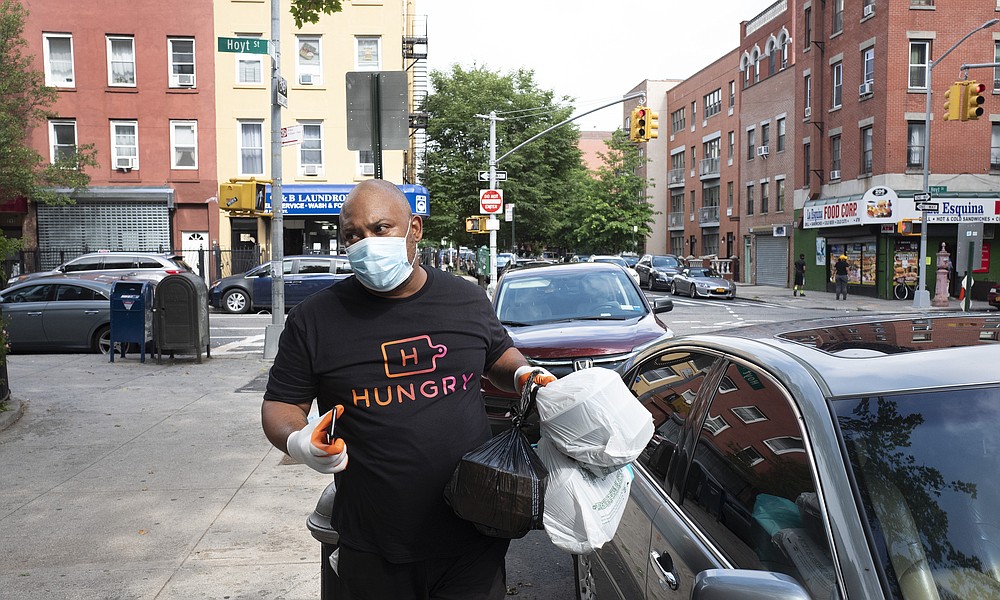 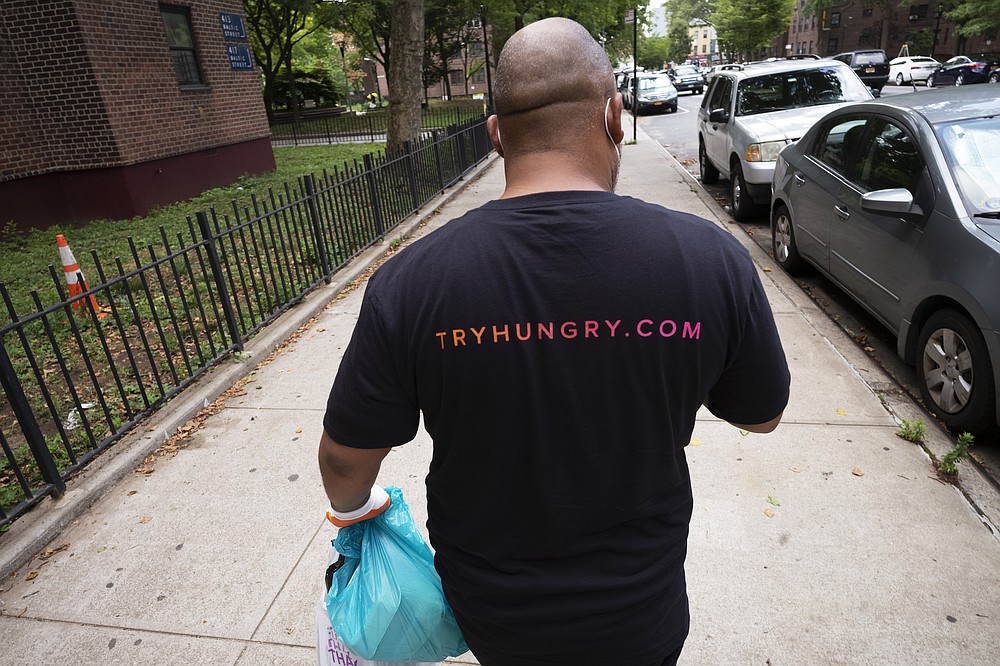