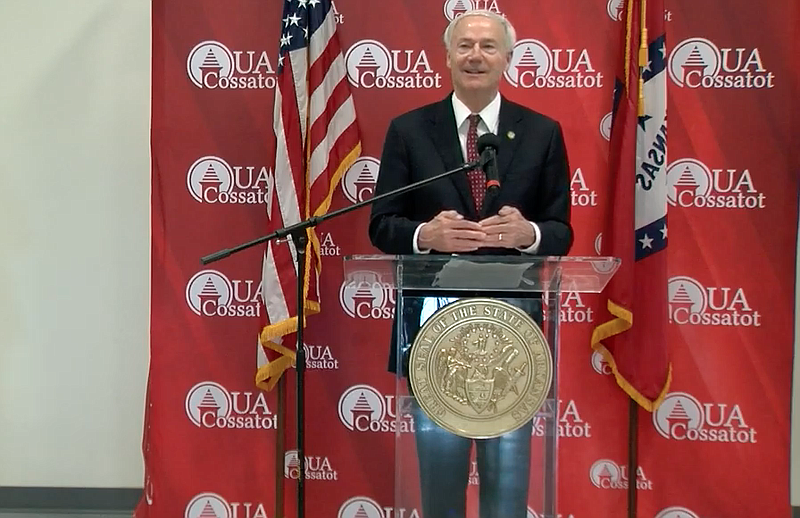 Arkansas Gov. Asa Hutchinson speaks to reporters on Friday in this still of video provided by the governor's office.

Of the 751 new cases, 149 were in correctional facilities.

Department of Health Secretary Dr. Nate Smith said the total number of active cases Friday was 5,847. Of those, 123 are in nursing homes, 584 are in correctional facilities and 5,140 are in the general population.

Smith said the number of patients on a ventilator increased by two to 84.

The number of tests done in the previous 24 hours rose to 5,212, returning to the lower end of the typical range seen in previous weeks after a drop off earlier recently which Hutchinson attributed in large part to the holiday weekend.

Hot Spring County saw the highest number of new cases Friday, 145, and Smith said most or all are connected to the Ouachita River Unit state prison.

He said this is not unexpected because testing an individual soon after their exposure can produce a false negative due to a low amount of the virus in the body.

Gov. Asa Hutchinson and state health officials will provide an update on Arkansas' covid-19 response from De Queen at 1:30 p.m.

The total number of coronavirus cases reported in Arkansas remained at 26,052 Friday morning, according to a state website. The death toll remained at 309.

[Video not showing up above? Click here to view » https://www.youtube.com/watch?v=zNZTiabC5D0]