All quiet with ASU, Michigan 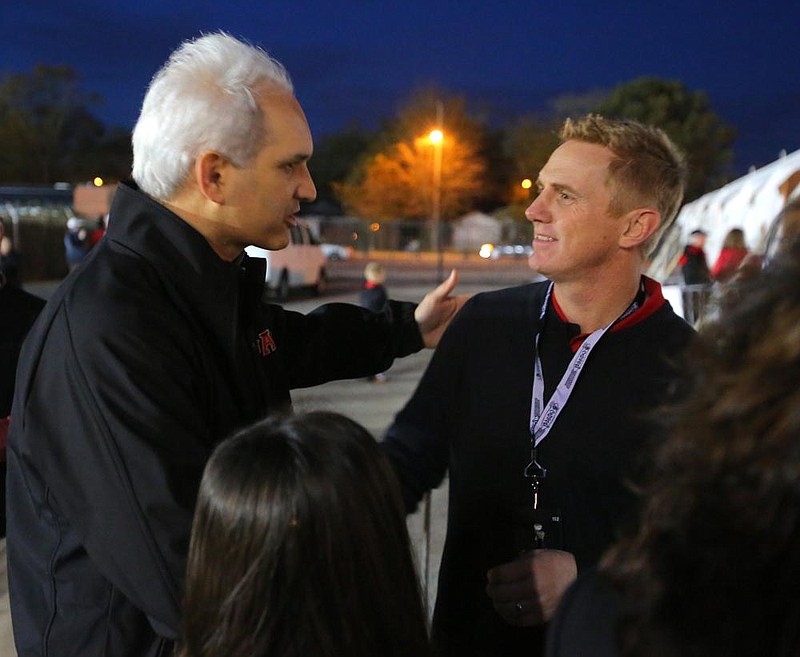 Arkansas State Athletic Director Terry Mohajir (left) and head football Coach Blake Anderson (right) are left with an opening in their schedule after their Sept. 19 game with Michigan was canceled because the Big Ten Conference elected to go with an intraconference schedule this season. (Arkansas Democrat-Gazette file photo)

It's still unknown whether Arkansas State and Michigan administrators have had any dialogue since the Big Ten announced Thursday that it would only play conference games for fall sports this season because of health and safety concerns over the coronavirus pandemic.

The two teams were scheduled to play a football game Sept. 19, in Ann Arbor, Mich., but ASU revealed in a statement Thursday that there were no conversations between the schools concerning any cancellation. The release also noted that ASU would evaluate all of its options as a result of the news.

The contract between ASU and Michigan was agreed upon and signed on Feb. 16, 2018. The Red Wolves were set to receive $1.8 million, which is tied for the largest single-game payout ever for ASU. The agreement included a cancellation fee for that same amount if either team backed out of the game. However, the deal also contained a clause that could cause issues.

According to the contract, no compensation or cancellation fee will be handed out "in the event it becomes impossible to play the scheduled game because of inclement weather; an act of God; strike; lockout or other dispute; an decision, order, law rule or regulation of the NCAA or any other federal, state or municipal agency or official." The pact also stated the fee would not be paid because of "the occurrence of any other material event that is beyond the reasonable control of a party."

The possibility of not receiving that payoff is notable for the Red Wolves. Georgia paid ASU $1.8 million when the two teams last season, the most the Bulldogs have ever paid to a nonconference opponent. Ohio State also has agreed to pay the Red Wolves that same amount for their game in 2021.

Before receiving Georgia's lucrative offer in 2019, the biggest guarantee that ASU had gotten was $1.7 million from Alabama in 2018. Washington is reportedly giving the Red Wolves $1.75 million to come to Husky Stadium in Seattle in 2021 as well.

In addition, ASU would have been only the second team from the Sun Belt Conference to play a football game against Michigan. Instead, Appalachian State remains the only member from the league to face the Wolverines, doing so twice.

The Mountaineers were two-time defending NCAA Football Championship Subdivision champions when they pulled off a 34-32, upset road victory in 2007. The Wolverines rolled 52-14 in their 2014 rematch.

The cancellation also means the 2020 season will be the first time ASU will not play a team from a Power 5 conference since 1979.

The Red Wolves have three nonconference games remaining on their schedule. ASU is set to open the season Sept. 5 at Memphis before hosting Howard University on Sept. 12. The Red Wolves also play Tulsa at home on Sept. 26.