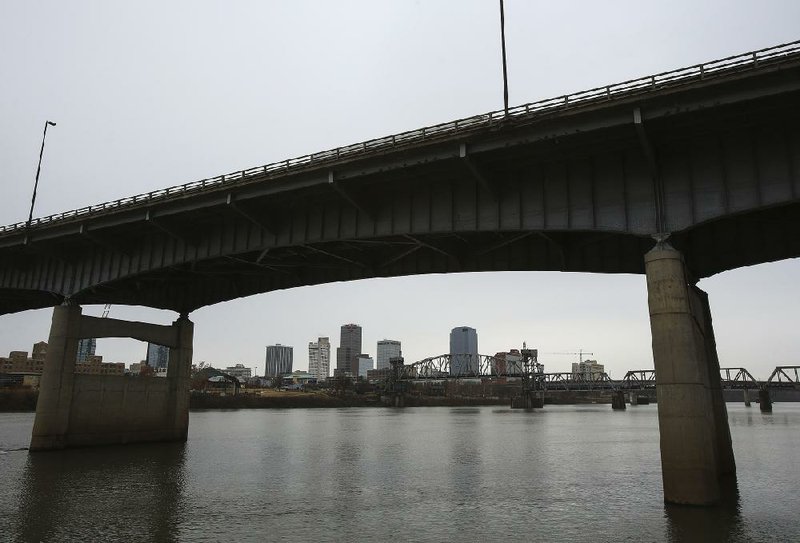 The Interstate 30 bridge in downtown Little Rock is shown in this 2014 file photo. ( Staton Breidenthal)

A coalition of Little Rock neighborhoods challenging the nearly $1 billion 30 Crossing project went to court once again Friday to enjoin the Arkansas Department of Transportation from beginning construction on the project.

In the court papers, the coalition said the department notified them that construction on the project to rebuild and widen the 7.3-mile corridor through downtown Little Rock and North Little Rock is scheduled to begin later this month.

Crews will begin re-locating utilities on July 21, telecommunications relocation work as well as other pre-construction work on the grounds of the Clinton Presidential Library will begin July 28, and "construction on the roadbed portion of the project is anticipated to commence in mid-October," the filing said.

The renewed motion came in a lawsuit the coalition filed against the department and the Federal Highway Administration last year.

A representative for the department noted that the court papers were filed Friday afternoon and left neither state agency nor federal agency attorneys a chance to review them.

The coalition was notified of the construction schedule on June 5, four days after a Federal Highway Administration reevaluation of the environmental effects of the project concluded that all previous findings "remain valid" and that the work had "no new or additional significant impacts" since its initial approval more than a year ago.

The reevaluation took place after parties in a lawsuit challenging the work won a pause in the litigation in December to determine whether the federally approved "finding of no significant impact" issued in February 2019 remained valid in light of a new project scope.

It came out in court papers that the state transportation department decided to break the project into phases after the joint venture that will do the construction -- Kiewit Infrastructure South of Fort Worth and Massman Construction of Kansas City, Mo. -- said it would cost about $1 billion to build as originally envisioned.

The department initially had said $631.7 million was available for the project.

The entire project -- at nearly $1 billion -- would be built if voters in November approve making permanent a o.5% statewide sales tax that is used to pay for road and bridge construction. It will have been in place 10 years when it expires in 2023.

The project, the planning of which began six years ago, is the most expensive that the department has undertaken. It focuses on improving the congested corridor through downtown Little Rock and North Little Rock, an area that features the convergence of six major roadways in the space of less than seven miles.

The project includes the I-30 bridge over the Arkansas River, which dates to the late 1950s and was built at a cost of $5.5 million. About 124,000 vehicles a day use the six-lane bridge. It will still be replaced under the proposed new scope for the project.

Replacing the bridge remains the "centerpiece," according to department officials.

In April, plaintiffs in the lawsuit, a coalition of Little Rock neighborhood groups, asked U.S. District Judge James Moody Jr. to order the defendants, the state Transportation Department and the Federal Highway Administration, to produce an accounting of their work.

The request came after the Transportation Department formally asked Metroplan, an association of governments in Central Arkansas that provides long-range planning for the region, to add $350 million in funding raising the price tag to $981.7 million.

The court papers filed Friday included a 133-page brief outlining what the coalition attorney said was the shortcomings in the environmental review federal authorities approved. It focused largely on the plaintiff's likelihood to succeed on the merits, an element in supporting a preliminary and permanent injunction.

Their arguments also included the fact that the project has been broken into separate phases and with a completion date uncertain, given that full funding depends on the outcome of the November vote.

They also objected to the design-build method of delivery that leaves it up to the contractors to make "final decisions on design and construction, which the coalition said was "an illegal delegation of authority."

The department also failed to respond to significant public comments on the project, including the "highly cogent and informed comments" from Casey Covington, the deputy director of Metroplan, the long-range transportation planning agency for Central Arkansas. Covington raised several areas of concern that the coalition's attorney, Richard Mays, said the department ignored or responded to "with gross generalizations."

The department also didn't adequately consider alternatives to the project design, including a reduced version of the project, didn't consider developing high-occupancy vehicle lanes and ignored mass transit altogether, according to the brief.

The coalition also alleged that the effect the project would have on traffic was flawed because of "faulty assumptions and computer modeling" while the environmental review failed to consider indirect impacts the project would have on other parts of the interstate system, including removing the existing congestion on I-30 in part to Interstate 630 and elsewhere on the system.

The environmental review also didn't consider the impact on "minority and low-income residential areas" adjoining the project. Nor did it analyze the project's impact on air quality.

"It is clear that either version of the proposed project will be the largest, most complicated and most expensive highway construction project undertaken by ArDOT or its predecessors; it involves many 'firsts' of construction procedures used by ArDOT; it will impact the human environment of virtually every person currently (and in the future) living in central Arkansas or who travels through that area; it will further negatively impact racial relations in Little Rock and North Little Rock; and it involves a number of legal issues that are without precedent," Mays wrote in the brief. "These are serious consequences that demand close scrutiny before being implemented.