Fueled by rising revenue from scratch-off tickets, the Arkansas Scholarship Lottery's total revenue in the recently ended fiscal year set a record of $532 million, an increase of $15.8 million over the previous fiscal year.

But the amount raised for college scholarships in fiscal 2020 dropped by $9.2 million from the previous fiscal year to $89.4 million, the lottery reported in its monthly report to Gov. Asa Hutchinson and the Legislative Council's lottery oversight subcommittee. Fiscal 2020 ended June 30.

"The drop in proceeds is solely based on the terrible draw game sales we had," lottery Director Bishop Woosley said Friday.

"Draw games are more profitable and sales for the two multi-state games were the worst we've ever seen," he said, referring to Powerball and Mega Millions.

The $89.4 million raised for scholarships ranked sixth-highest for a fiscal year in the lottery's nearly 11-year history. In fiscal 2019, the lottery raised a record of $98.6 million for college scholarships.

It has helped finance Arkansas Academic Challenge Scholarships for more than 30,000 students during each of the nine preceding fiscal years.

The scholarships also are financed with $20 million a year in state general revenue and a $20 million reserve fund that covers temporary cash shortfalls regarding the payment of scholarships and receipt of lottery proceeds.

Records of the state Division of Higher Education show 26,863 students have received $88.6 million in scholarships in fiscal 2020, and "there are a few rosters outstanding, but not many," division spokeswoman Alisha Lewis said Friday.

The division has forecast that it will distribute $91 million in these scholarships to 31,000 students in fiscal 2021.

The Legislature has reduced the size of future Academic Challenge Scholarships three times over the course of the lottery's history. The total amount peaked at $132.9 million in fiscal 2012.

Besides Mega Millions and Powerball, draw games include the Natural State Jackpot, Cash 3, Cash 4, Fast Play and Lucky for Life.

Woosley said scratch-off ticket revenue increased most of fiscal 2020 and "began to really take off in early March and continued through the end of the fiscal year" to post record revenue for a fiscal year. The first positive coronavirus test was announced March 11.

"We had the highest instant ticket sales year ever for $5, $10 and $20 instant games and the second best year ever in $3 instant ticket sales," he said. "I believe there was a period of time for two or three months where most forms of entertainment were closed [amid the covid-19 pandemic] and we were one of the only forms of entertainment that people could purchase and take back to your home and play."

The jackpots for the Mega Millions and Powerball games never reached a level for most players to get excited and begin buying a few more tickets, he said.

The pandemic really hurt the Powerball and Mega Millions game sales, he said.

"The games had to be changed to limit liability for the states and to ensure that the organizations could fund the jackpots based on the severe drop in sales and interest rates," Woosley said. "These are the games that are the most profitable for the lottery, so having a drop in those sales really impacts the bottom line."

In June, the lottery's total revenue increased by $14 million over the same month a year ago to $52.4 million, due largely to a $13.8 million increase in scratch-off ticket revenue to $45.4 million. By comparison, draw game revenue in June inched up by nearly $300,000 over a year ago, to $6.9 million.

Meanwhile, the amount raised for college scholarships in June increased by $1.5 million over the same month a year ago to $14.9 million, including $8.8 million transferred from the unclaimed prize reserve fund as required by state law.

Asked about the impact of the state's casinos on the lottery in fiscal 2020, Woosley said the expansion of casino gambling in Arkansas has hurt the lottery to some extent.

"When the casinos closed down [in mid-March through May 18], our sales increased. Since they reopened back up on a limited basis, sales have dropped some, but have remained fairly steady," he said. "I will be interested to see if sales drop again once casinos are fully open and operating at 100%."

Under Amendment 100 to the Arkansas Constitution -- approved by voters in November 2018 -- gambling operations in Hot Springs and West Memphis expanded into full-fledged casinos. A casino is under construction in Pine Bluff, and across the street is the Saracen Casino Annex that opened its doors in late September.

The Arkansas Racing Commission has yet to issue a license for a casino in Pope County under Amendment 100.

In fiscal 2021 that started July 1, Woosley has projected total revenue of $465.8 million and raising $78.2 million for college scholarships.

Last month, Woosley told lawmakers that the lottery is considering implementing the game of keno, which has been opposed by some lawmakers in the past, and a digital channel as an iLottery offering.

Asked about the timeline on making such decisions, Woosley said Friday in his written statement to the Arkansas Democrat-Gazette that "there has been no change since your last status request" last month.

On June 19, Woosley said in a statement to the newspaper that "the timing of the launch [of keno] or the decision whether or not to even offer keno can change based on the status of the Covid pandemic, further discussions with interested parties or other initiatives that may create better revenue opportunities."

A digital channel could mean selling lottery tickets using a mobile device, purchasing a loaded card in a brick-and-mortar retailer, which people then load on their mobile device to earn credits toward play or loading credits into an account and scanning a QR code at a retailer to activate the games, he said last month.

The pandemic has been a roller coaster for state lotteries across the country, with some getting a boost from the economic downturn and others scrambling to make up for revenue shortfalls, The Associated Press reported this week.

Since March, Arkansas, Montana, Texas and several other states have seen an increase in sales, in part driven by housebound residents putting cash down for scratch-off tickets.

But lottery officials say other states, such as Massachusetts and Oregon, saw revenue drops because of stay-at-home orders that forced the closure of restaurants, bars and some retailers that sell tickets.

Some also blamed a lack of an online presence, something only a handful of states now allow.

State lottery revenue does not make up a huge portion of a state budget. But because the money is often directed to specific programs such as education, environment or veterans programs, it can have an outsized impact when there are upticks or declines in sales.

Massachusetts Treasurer Deborah Goldberg told lawmakers in April that the lottery was hobbled by the closure of claims centers and the lack of an online presence, something that helped neighboring New Hampshire and several other states attract new players. Currently, at least nine states allow online lottery sales, according to the North American Association of State & Provincial Lotteries. 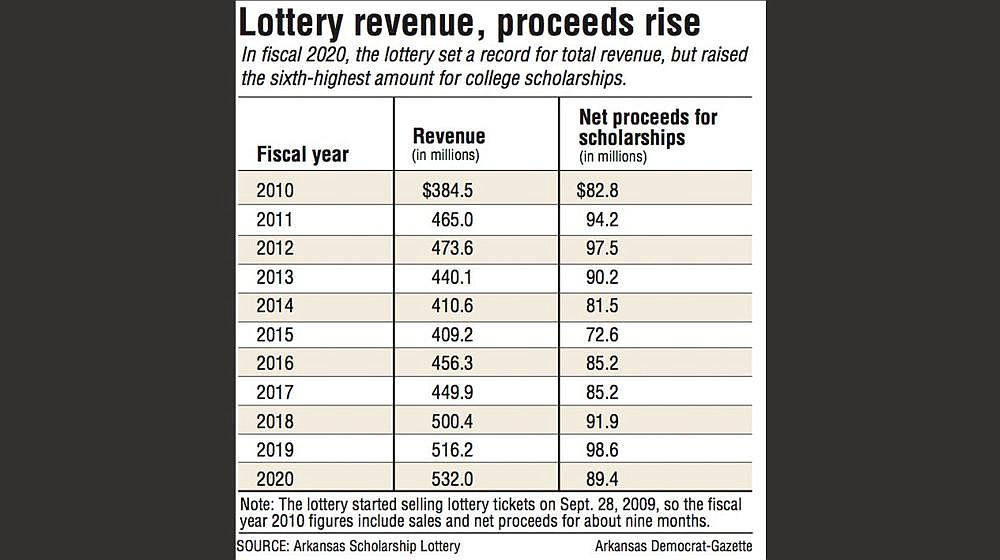