Travel with kids during the pandemic? 'I wouldn't do that for fun' 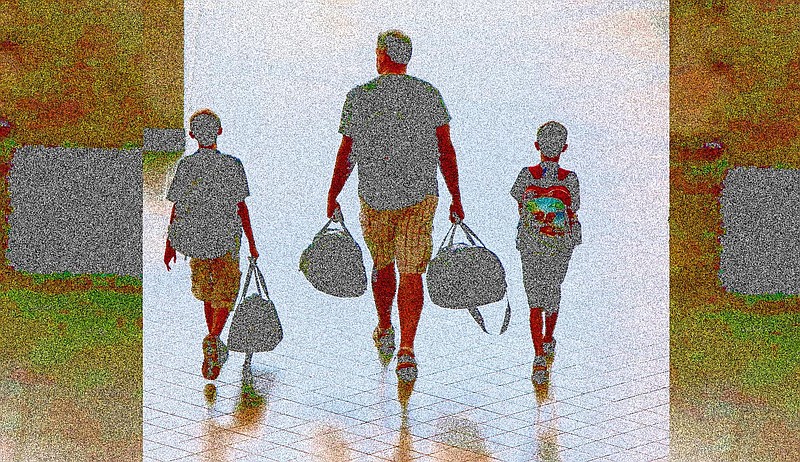 As they watched the coronavirus pandemic sweep the globe, Chelsea Jackson and her family postponed their planned move for as long as they could. But finally in June, she, her husband and their two kids boarded flights from the Marshall Islands to their new home in Seattle.

They are among the parents who have cautiously begun booking trips — to move to a new home, to visit family, even to take a vacation — as travel restrictions are being lifted in some parts of the world. But traveling with children, especially on planes and through airports, was stressful and germy even before the pandemic hit. How can you do it safely now?

"If you have to travel cross-country or internationally, I wouldn't do that for fun," said Yvonne Maldonado, a senior associate dean for pediatrics at the Stanford University School of Medicine and chair of the committee on infectious diseases at the American Academy of Pediatrics.

"There's so much uncertainty about who you're going to be around and how close you're going to be to the next person and how well the airlines are cleaning their planes," she said. Traveling by car is a safer alternative to flying, she said — especially if family members are at high risk for the coronavirus.

Flights might be unavoidable for some families. In that case, many of the same precautions we've taken in the past few months still apply: Stay home if you're sick, wear a mask, try to keep a distance from others and keep your hands as clean as possible. If possible, Maldonado said, get tested before and after the trip.

It's also important to consider whether you are coming from or traveling to a coronavirus hot spot. Families could take the virus to an unaffected community, or they could bring it home to vulnerable family members. Travelers should also check to see whether masks are required at their destination and plan accordingly.

Coming from the Marshall Islands, where there have been no recorded cases, the Jacksons were concerned about adjusting to life within a pandemic. These changes started as soon as they boarded their first flight.

"We definitely changed our routine a lot," Jackson said. Their 8-year-old and 18-month-old daughters had traveled before, but this was different. No more trips up and down the aisles, no more snacks from flight attendants and definitely no more meeting the pilots in the cockpit.

"We stayed in our seats. I was pretty careful to pack as many activities as possible," she said. The girls played with coloring books and stickers and got more screen time than normal. "Are the germs the bigger enemy, or three hours of screen time? You just have to pick your battles."

They kept their carry-ons to a minimum: no blankets, pillows or stuffed animals that might get dirty. And they brought extras of everything, including masks and hand sanitizer.

"There were lots of opportunities at the airport to disinfect your hands," Jackson said. Hand sanitizer was abundant, and they washed their hands wherever they could. They also tried to minimize trips to the bathroom. Jackson wiped everything down -- the tray tables, windows, armrests -- with disinfectant wipes, even though the planes had been disinfected between flights. (Different airlines have different rules about that.)

Both flights had extremely limited meal service, and many restaurants in the airports were closed, so Jackson recommends packing plenty of food and water, including plastic utensils. "We just had to rely on what we brought," she said.

All four of them wore masks, although the youngest frequently took hers off. They chose cloth masks with fun patterns that the kids liked more than the surgical masks distributed by flight attendants. One of the most effective ways to get her younger daughter to wear a mask was to let her see her big sister wearing one.

"Creating some kind of a buddy system and having the kids play off of each other was a great way to do it," Jackson said.

Children who are too young for masks can also wear face shields, said Qingyan Chen, an engineering professor at Purdue University who researches airplane air quality. A face shield is "not as good as a mask, but it's better than nothing," he said.

The air coming into the airplane cabin is highly filtered, Chen said. The problem is the air already circulating in the cabin — the exhalations (and coughs) of other travelers. That air hangs around on planes for three to four minutes, he said, before running through a filter.

The nozzle of air that you can adjust overhead blows out filtered air, so it's low risk; but it's not strong enough to push the cabin air away from you. "You turn it on or turn it off, it doesn't matter," Chen said. "The air quality is the same."

It's safest to keep the whole family together rather than in different rows, he said. The highest risk is a seat right next to someone who is contagious. Within a row, the farther kids are from other people, the better protected they are. Keep in mind, though, there's also a risk from people around you; those seated in the three rows behind and in front of you could also get you sick.

Chen also recommended that families try to sit as far from the toilets as possible. It's not as important as finding seats at a distance from other people, he said, but it's a factor. Limiting trips to the bathroom is also a good idea. If you have to go on the plane, earlier in the flight is better, when fewer of your fellow travelers have had a chance to hit the head.

But Chen also pointed out that airplanes are safer than subways or buses when it comes to air quality because they have HEPA filters cleaning the air. Chen said he would rather take a flight than travel by bus, for instance.

Some families are avoiding public transportation altogether, opting instead to drive to a nearby destination.

Bri Howard, her husband and their 6-year-old daughter drove from Fairfax, Va., to the Outer Banks of North Carolina for a week-long Fourth of July vacation. "If it was a trip where we were flying, I might not feel as comfortable," Howard said. But they made the drive in six or seven hours.

They chose a rental home instead of a hotel to avoid contact with other guests. Howard communicated with the owner of the rental, and she brought many more supplies than usual — from towels and linens to water and soap for the car ride and paper products.

"We were advised to bring our own hand sanitizer and toilet paper and paper towels and things like that just because in some areas, they might still be harder to come by," Howard said. "The last thing I want to be doing on vacation is trying to find toilet paper."

She also brought masks, gloves, an apron and supplies to clean the house when they arrived — especially high-touch surfaces and items such as remote controls, light switches, door handles and dresser drawers.

Before the trip, Howard said she knew it would be different from other trips. "But we decided that it will be worth it," she said. "We need a vacation." The family was eager "just to put our toes in the sand."

Instead of going out to eat, shopping and watching their daughter play with other kids, the Howards planned more solitary activities such as tie-dyeing, biking and kite flying. "It's been really amazing!" Howard emailed during the trip. Eating their meals at home instead of at a busy restaurant, she said, freed them to spend more time at the beach.

On the drive down, they made one planned stop at a friend's house to use the bathroom and stretch their legs. They also made contingency plans in case the 6-year-old got carsick; she would have a little motion-sickness kit next to her, and they could stop and walk if needed.

A night or week away might help not only parents but also kids cope with the stress of the pandemic — depending on the child's personality.

If your child has been struggling to deal with isolation over the past few months, a change of scenery could help them get out of their funk.

But if your child has been anxious or afraid of getting sick, the trip could add to their anxiety — and that would be no fun for anyone, said Clarissa Simon, a health scientist in the Family and Child Health Innovation Program at the Lurie Children's Hospital of Chicago. "The relaxation you're expecting and hoping for as a parent may not quite materialize, and you may experience actually an increased level of stress."

Having conversations with your kids about what to expect and how this trip will be different from previous travel is also important, so they're not surprised or overwhelmed, she said.

At its best, travel teaches you about the world and about yourself. Traveling during a pandemic is no different. This summer is an opportunity to teach kids about traveling responsibly and recognizing the freedom of being able to take a vacation, Simon said.

"Whether you go on your vacation or not, this summer is going to be different from other summers," she said. "I think that's a good opportunity to prepare your kids for a lot of unpredictability in life."

The Jackson family has settled into their new life in Seattle. Two weeks after their trip, no one has showed any symptoms.