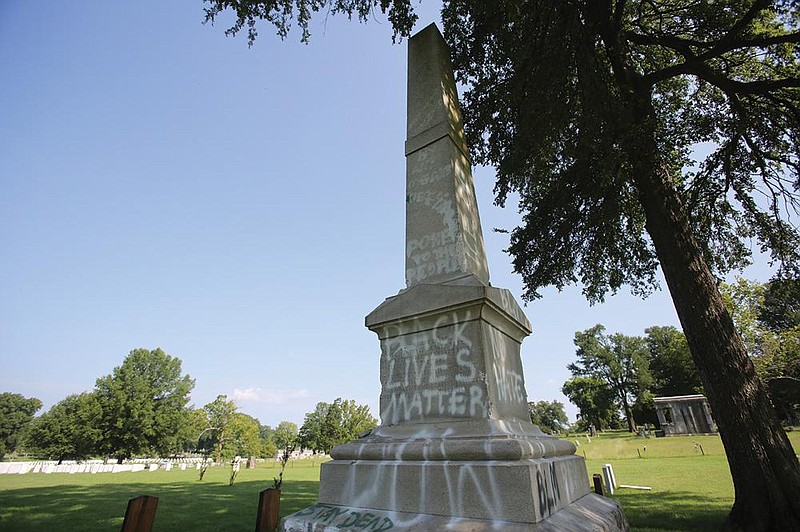 Two people, whose images were captured on video camera, entered the cemetery under cover of darkness, according to Sexton John Raines, who works at the cemetery.

They beat and attempted to pull down an obelisk that marks the graves of about 900 mostly unknown Confederate soldiers, then spray painted "F Trump," "F Your Martyr" and "Black Lives Matter" on the monument.

"They destroyed one of our obelisks and wrote all over it with spray paint, and chipped it very badly beyond repair," Raines said. "They wrote a bunch of racial slurs and f this, f that."

The obelisk was donated in 1913 by the United Daughters of the Confederacy to mark the location of a mass grave containing the remains of about 900 Rebel soldiers.

The soldiers buried on the 1-acre site died in Little Rock hospitals in 1863, according to the Encyclopedia of Arkansas.

"Underneath the obelisk, it's about a 22-foot obelisk, there are approximately 900 unknown Confederate soldiers," Raines said. "We've been able to identify a few but not a whole lot out of the 900."

Aside from the granite obelisk, nine wooden headstones that stood in a semi-circle around the graves were also damaged. The vandals gouged the word "Confederate" out of the wood.

The wooden markers were donated by the Sons of Confederate Veterans less than a year ago, Raines said.

"It's irreplaceable," Raines said of the obelisk. "I mean, we could have it replaced, I guess. It'd be tens of thousands of dollars to do, but we don't have plans at this moment."

Also, a gravestone was removed and hasn't been found.

"We looked all over the immediate area and within 100 yards, and there's nothing around," Raines said. "I don't know if they took it as a memento. Who knows?"

The camera footage shows a black man and a white woman near the obelisk, appearing to be attaching a strap around it and trying to drag it down.

Both individuals' faces are clearly visible, and Raines hopes authorities will be able to identify them.

"With such a large social media list, I think once that picture gets out, because he looked right at the camera, there should be somebody that will hopefully come forward," Raines said. "That was a very clear picture."

The man in the footage is seen with a radio or walkie-talkie, prompting Raines to think there may have been more than just two individuals.

"There probably was a third person, maybe a fourth, who knows, because the black male shows clearly a radio that he's in contact with somebody," Raines said.

The cemetery staff contacted Little Rock police and the local FBI office to report the incident as a hate crime, according to Raines.

"They will both be investigating," Raines said.

Connor Hagan, spokesman for the FBI's Little Rock office, would neither confirm nor deny that an investigation is being conducted.

He encouraged anyone with information about federal crimes to call the FBI's tip phone line.

"The long-standing policy of the FBI and the Department of Justice is we don't confirm or deny an investigation," Hagan said.

Little Rock Police Department spokesman Casey Clark said the department will be leading the investigation into the vandalism because the FBI had determined that it was not a federal case.

Gov. Asa Hutchinson had no comment about the incident, a spokesman for the governor's office said. 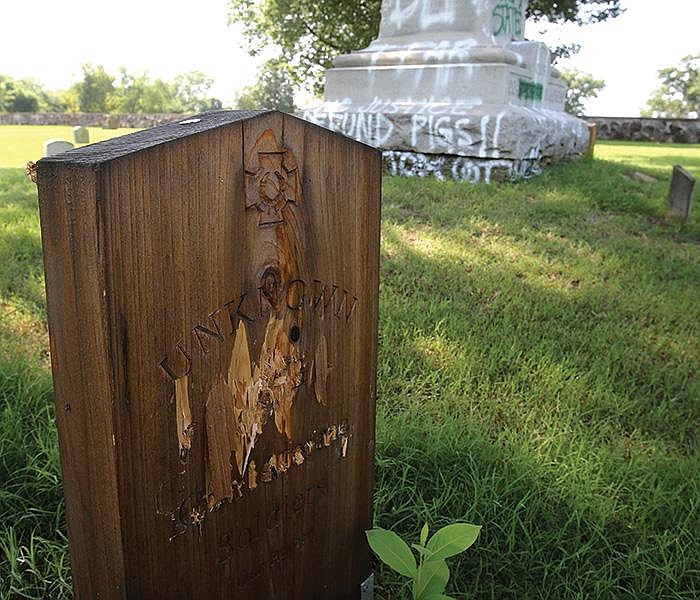 A defaced headstone sits Saturday in front of the Confederate monument at the Oakland Cemetery in Little Rock. The marker on the mass grave, said to contain 900 Confederate soldiers, was vandalized Thursday. (Arkansas Democrat-Gazette/Thomas Metthe)
ADVERTISEMENT