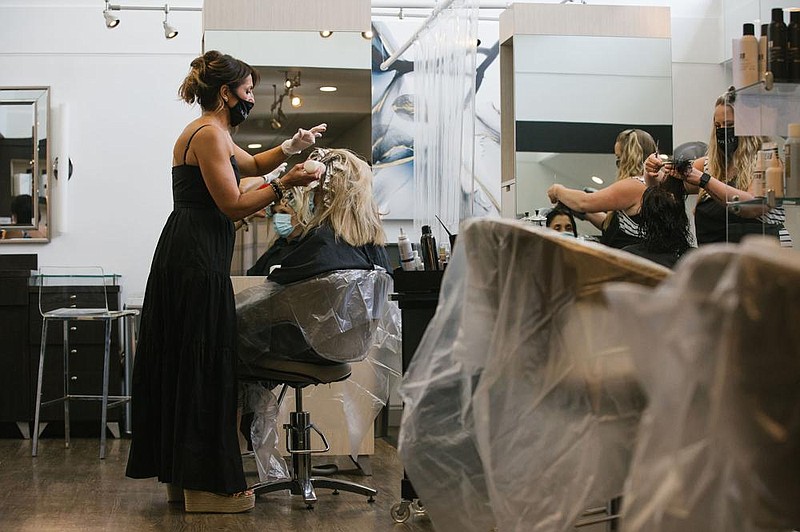 MAPLE GLEN, Pa. -- It was like the first day back at school, except with hair dye and combs in canisters of Barbicide. Oh, and masks. Exciting, and also a bit daunting.

"I want to hug you," Beth Dickson says to Dulce Astolfi from behind a paper mask.

"Me, too," says Astolfi, answering behind a black cloth.

There would be no hugs. No coffee. No snacks. No touching of products. No lounging. No chitchat between waiting clients except while standing many feet apart, yelling through the muffling of their masks and over the din of blow dryers.

On March 14, Pennsylvania became one of the first states to close hair salons and barbershops in response to the covid-19 pandemic, and on June 26, its most populous counties were among the last places to reopen them. The Keystone State had been rendered the land of forlorn locks.

It had been almost 16 weeks since Dickson's last appointment, 111 days to be precise. An entire season! We're talking hair that, without regular maintenance, has a will and a way of its own. Much like pests or weeds.

Astolfi, 48, owns Sorelle Hair Studio, an airy salon tucked behind a strip mall in a verdant Philadelphia suburb. Dickson, who works in sales for a financial tech company, is her monthly coloring client of 20 years. She followed Astolfi from her former salon to Sorelle, which the hairdresser opened a decade ago, naming it after "sisters" in Italian.

How much does Dickson trust Astolfi? Why, Astolfi convinced Dickson, whose natural tresses are dark chocolate, to go blond -- Nordic blond -- in her mid-50s. Dickson, 59, never looked back.

And here she was returning on the first day Astolfi was permitted to reopen her door. Dickson had taken off the afternoon from work to "triage" her hair.

"It's nice to return to normal -- as much as this can be described as normal," Dickson says.

Going to the hair salon, a quotidian treat and a monthly -- or, in some cases, weekly -- reclamation project, is no longer normal. Given the tactile nature of hair care, a glut of new regulations has completely altered the experience. For the foreseeable future, getting a haircut -- and color, which can take hours longer -- will be the epitome of our risk/reward calculations. Are our vanity-defying roots worth the potential exposure to coronavirus or infection of others? For many women, the answer appears to be "I'll take the next available appointment."

Closing was brutal for Astolfi, following a year when Sorelle enjoyed a 6% growth in revenue. In April, she grossed $2,000, earned from sales of gift certificates and home hair-dye kits. Her monthly rent is $4,650. In May, she grossed $1,000.

"Thirty percent of hairdressers live paycheck-to-paycheck," says Mary Rector, founder and chief executive officer of Behind the Chair, an industry website. The median hairdresser income was $26,270 in 2019, according to the Bureau of Labor Statistics. During the shutdown, some stylists continued to work in defiance of state orders; some were jailed. "We're anticipating 40% of salons going out of business due to the pandemic. I'm dying for my constituency. It's going to be more devastating than they even know." Rector fears that, with the national spike of new coronavirus cases, some states may require salons to shutter again.

Almost 800,000 Americans work in hair care and cosmetology, according to the Bureau of Labor Statistics, and the overwhelming majority are women. Some 60% of salons are owned by women, according to the Professional Beauty Association.

In Pennsylvania, salon reopening dates were floated, then dismissed. Some owners filed suits. When Democratic Gov. Tom Wolf announced they could reopen, Sorelle was flooded with more than 750 emails and 500 voice mails from clients jockeying for appointments.

"What I've missed in the past three months is my connection with my clients," Astolfi says. "Most of the time, they become your friends. They might arrive in a terrible mood but by the time they leave, they're happy and smiling."

Astolfi, whose family moved from Portugal to the United States when she was 5, has been doing hair since she was 18. Like many hairdressers, Astolfi describes hair as her passion. It was her only career choice.

A hair salon is an oasis for clients to unwind and improve. It is a place they visit to instantly feel better -- provided your concept of "instant" is a couple of hours, to set base color, highlights and gloss. Yet it is all about the touch, the laying of professional hands on exposed roots and damaged ends.

In the days leading up to reopening, to abide by Pennsylvania's new regulations, Astolfi removed all makeup testers, magazines, some lounge and side chairs. There would be less relaxing.

Astolfi installed clear shower curtains between work stations (Plexiglas proved too costly except for the front desk), and bought cleaning products, disposable paper capes, disposable plastic chair covers, UV sterilizing boxes for phones and keys, and black and white masks printed with the salon's name. Hand sanitizer was installed next to styling products, mirrors -- frankly, everywhere. A coloring trolley cart was transformed into a cleaning trolley cart. During the weeks she was closed, Astolfi had the salon professionally cleaned three times.

But the biggest change is reducing simultaneous bookings by half, staggering clients as well as her all-female staff of 17. Starting July 3, she planned to work eight days straight.

"I'm terrified. Just terrified," Astolfi says a few days before reopening. Two fears dominated. "Someone will be upset about nothing," she says, and that anxiety will spread. "Or someone is going to walk in and they don't know they have coronavirus." She worried for her clients and staff. "It's just the fear of the unknown."

Before her appointment, Dickson worried most about Astolfi's financial well-being. "I know how hard she works. I can go without color," she says. "What's it doing for her bottom line? Small businesses are really suffering. I want to support her. She has worked so hard to get this business up and going." While the salon was shut down, Dickson trimmed her side bangs and bought a dye kit from Astolfi, enlisting the help of a YouTube video and her husband.

On July 3, Astolfi arrived at the salon at 6:30 a.m., dressed in a long black sundress and towering platform espadrilles with leopard-print straps. Clients came dressed in flip flops, their toes unvarnished. Nail salons had only reopened that day as well.

There was delight in seeing friends. Many clients know each other and are close to the hairdressers and staff. There was much commiserating, mostly about hair. Clients arrived with roots as white as powder. Bangs had grown into waterfalls. Bobs had devolved into kudzu.

Instead of 10 chairs, only four were occupied. Instead of four shampoo stations in the back, two were in use. Instead of three "girls" behind the front counter -- they are "girls" well into middle age -- only two booked and checked out clients, who ranged in age from teenager to great-grandmother. Customers had to be called before they were allowed to enter, then were asked to sign a health waiver, checking off six boxes.

Now, to reduce congestion in the salon, clients are asked to let color set while sitting in their cars. All afternoon, there was a steady parade of women in capes, masks and dye-soaked heads exiting the one-story premises for the parking lot.

Dickson arrived at noon. She was Astolfi's 12th client of the day.

Astolfi mixed Dickson's highlights and color, painting on sections before folding foil into cascading rectangles to help them set, a process that makes the client look like a cross between the Tin Man and the Cowardly Lion. They chatted about their children, college choices, high school sports, the quarantine, work, even hair.

"There's no drama with her," Dickson says. "Everybody is friendly and professional. I just want to decompress, have some fun."

Lena Liberman, 44, who cut Dickson's hair, and dyed and waxed her eyebrows, was ecstatic to return. They talked about food, actors, children, the lockdown, more food.

"I've been losing my mind," Liberman says of not working for months. "I took up cooking, gardening, baking."

Three and half hours later, and $330 lighter -- Dickson swallowed as she recited the damage -- she left with a lustrous curtain of varied blond highlights. She was smiling. Or what appeared to be a smile behind her blue cotton mask.

An earlier client had already texted Astolfi her thanks: "I just wanted to write to you to tell you how great a job you're doing. I felt safe this morning. You seemed to pay attention to every detail."

For all the preparations, the added expenses, there is only so much Astolfi can control. "I think we all have that underlying fear," she says. "What if this happens again in September and we have to shut again?"

Astolfi had eight clients left, 20 in all. She would not return home until 9:30 that night, 15 hours after her work began. And yet, she texted, "It was a great day!!" 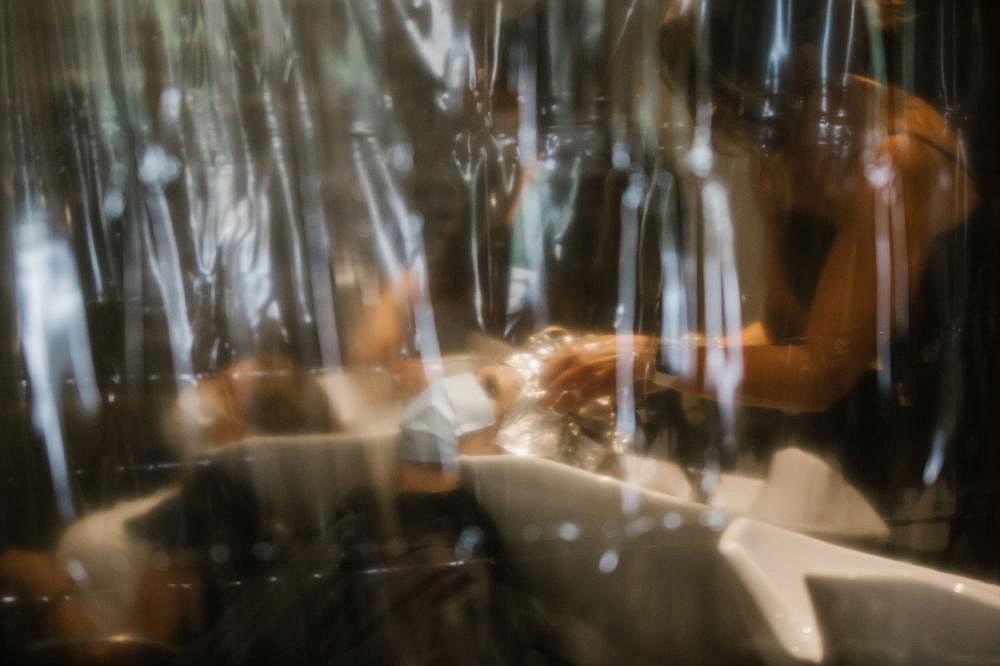 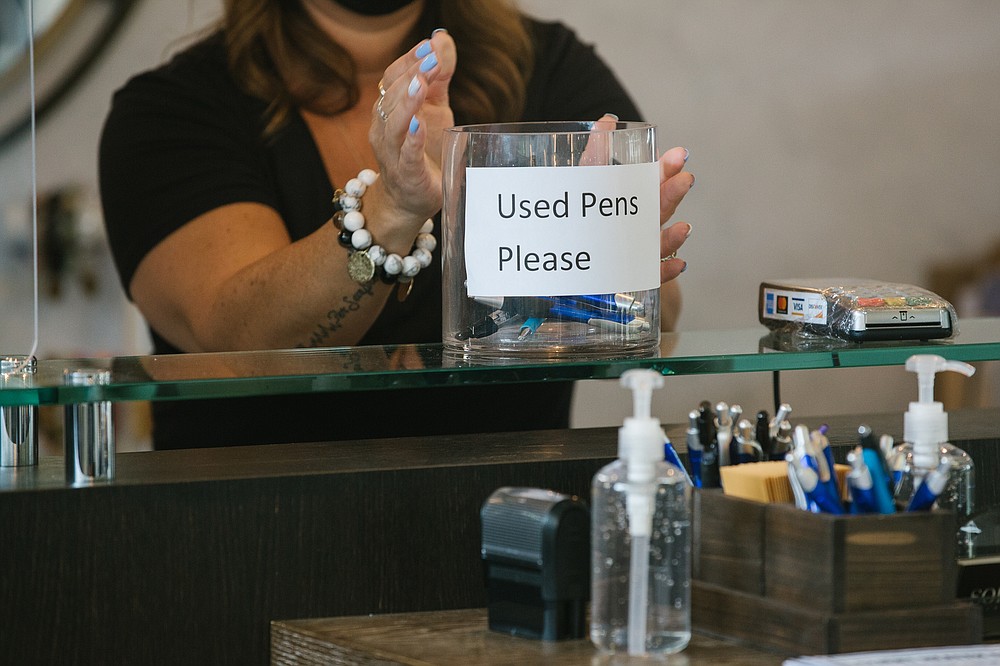 The front desk at Sorelle Hair Studio. MUST CREDIT: Photo for The Washington Post by Michelle Gustafson 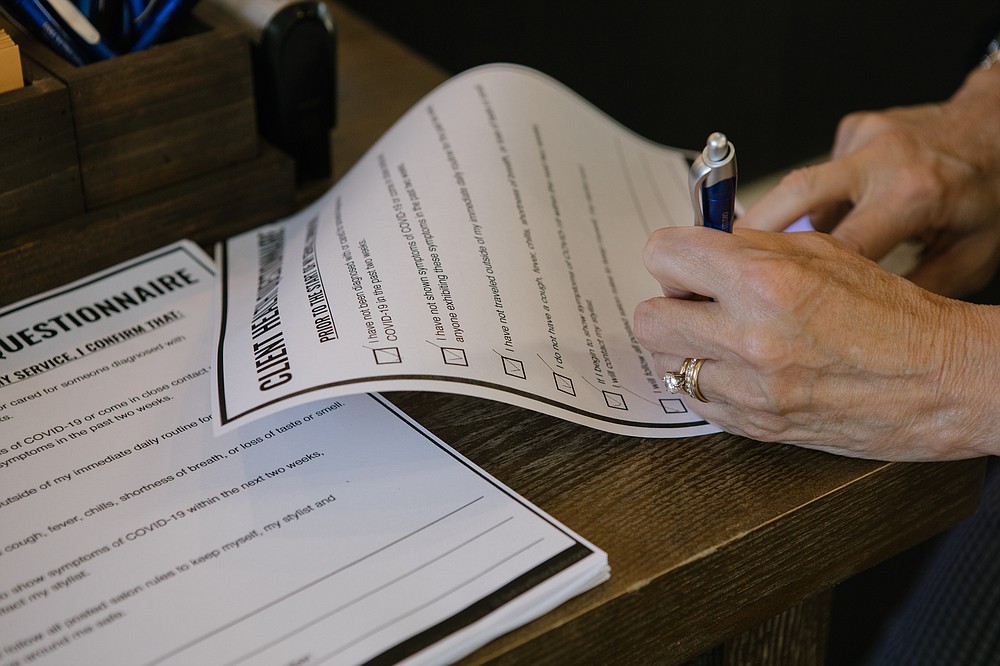 Sorelle Hair Salon clients are asked to sign a health form. MUST CREDIT: Photo for The Washington Post by Michelle Gustafson 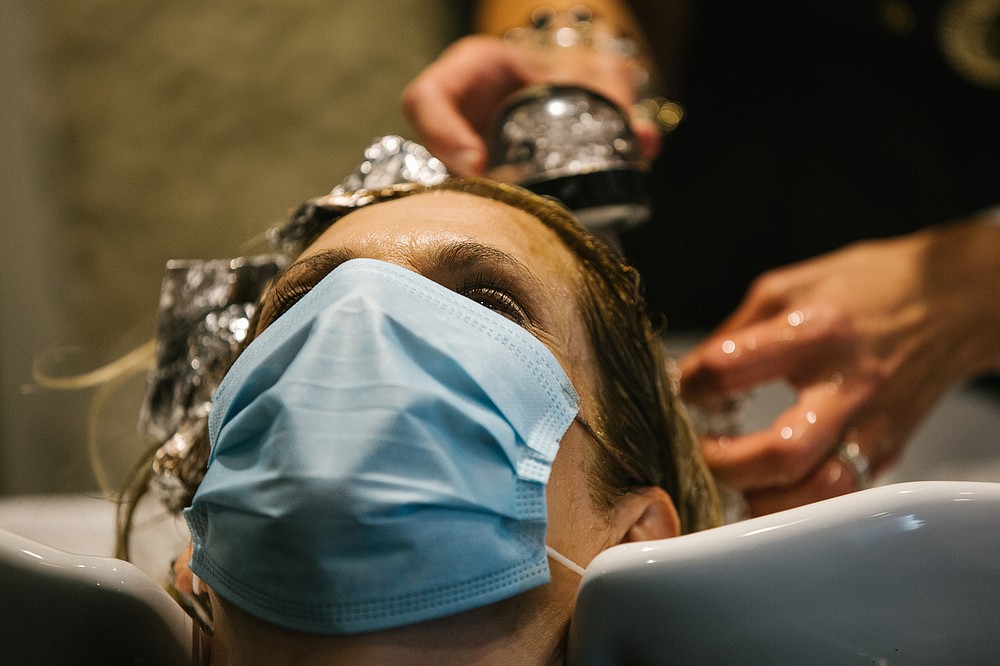 Dulce Astolfi has been coloring Beth Dickson's hair for 20 years - but no appointment was quite like this one. MUST CREDIT: Photo for The Washington Post by Michelle Gustafson 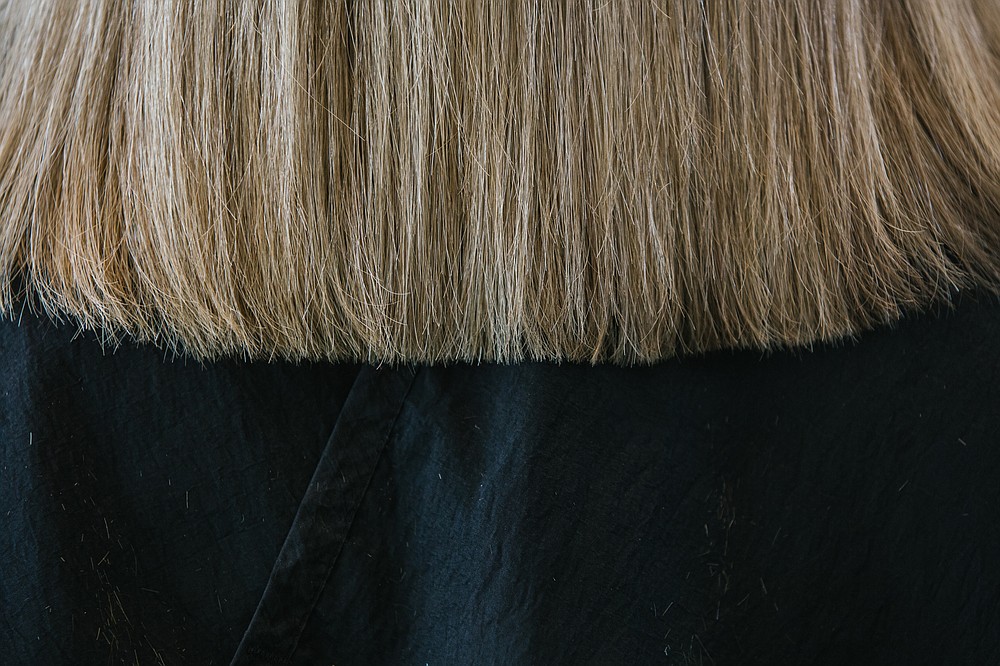