Rings and bases: Rifle accuracy starts with the scope mounts 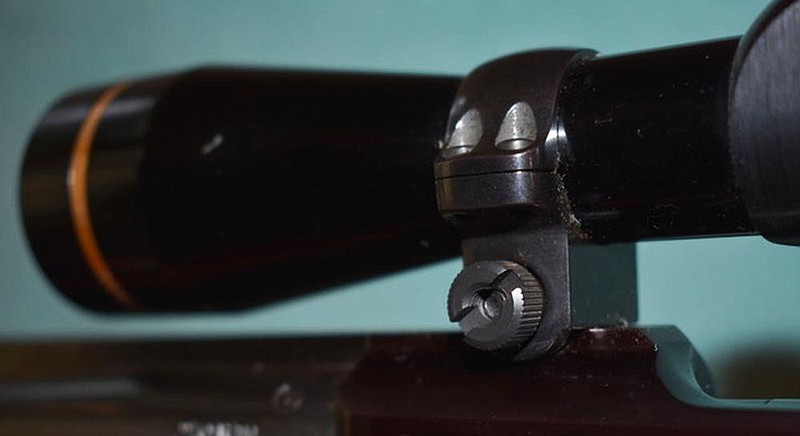 The rear ring on a Redfield style mount is held only by two windage screws which can loosen and throw a scope off zero. (Arkansas Democrat-Gazette/Bryan Hendricks)

If a scope is the most important element for rifle accuracy, the scope's mount and rings are just as important.

No matter how precise your scope is, it is meaningless if your mounts are faulty, unsteady or unsuited to your rifle or to you as a shooter.

All modern rifles have receivers that are drilled and tapped for mounting scopes. If your rifle was made before 1947, there is a good chance that its receiver was not drilled and tapped to mount scope bases. If that's the case, your journey begins with a trip to the gunsmith to drill and tap the receiver. This requires precise alignment with precision tools to ensure that the holes are in perfect alignment with the barrel and muzzle. Bill Pool of Benton, a gunsmith and owner of Arkansas Gun Traders, said that the labor alone for a drilling and tapping job starts at about $50-$100.

"If someone brings in a receiver without the barrel, it makes the job a lot easier," Pool said. "If it's an old Mauser, a gunsmith has to take all that military hardware off, and putting all that crap back on can be just as time consuming as taking it off. You can save yourself some money by taking it off yourself."

A lot of shade tree gunsmiths have butchered rifle receivers trying to drill and tap with hand drills. Pool said he sees these abominations all the time. Not only are the holes misaligned with the barrel and receiver, the holes themselves are often misaligned.

"I saw one just the other day," Pool said. "There were holes drilled all in that thing, and the guy never did get it right. I found some Redfield bases that fit on that receiver, and I welded them on there."

The famous Redfield base was the standard for many years and was available in one-piece or two-piece. The front of the base has a slot. A stem on the bottom of the scope ring fits in the base. Using a dowel or a metal rod, rotate the ring until it locks in place.

The back base is flat, with two screws on both sides. The scope ring rests on the base, but only the screws hold it in place. Turning the screws in and out points the scope to right or left for a rough windage adjustment. Pool said John Redfield designed them to remedy the shade tree butchery described above.

"So many garage jobs weren't in line with the bore, but with those bases you could still get windage if the holes were screwed up," Pool said.

This system is inherently flawed, though, because only the front ring actually attaches the scope to the receiver. If the rear windage screws loosen, you will lose zero or worse.

"I had a guy bring a gun in here, a hard-kicking gun," Pool said. "The screws got loose in the back. When he shot it, the upward momentum eventually tore the front ring out of the base."

In short, the Redfield system simply has too many moving parts. A discrepancy in any link in the chain will affect point of impact.

An improvement to the Redfield mount is a milled one-piece mount and base. Two are in a package. One mounts to the front of the receiver, and the other mounts to the rear. It is rock solid, and there are no moving parts. It is also permanent. This type of mount is out of favor and hard to find.

Available in one- or two-piece configurations, the Weaver-style mount is infinitely more stable than the Redfield mount.

The base contains several slots. A milled rib on the bottom of a Weaver ring rests in a slot on the base.

"Benchrest shooters started using Weaver bases a long time ago," Pool said. "The cross slots are perpendicular to the line of recoil, and if you want to remove the scope, you can put it right back on without losing zero."

The Weaver system eliminates all of the aligning procedures and tools necessary to properly align a Redfield system. It isn't foolproof, though. My Winchester Model 70 Featherweight in 7x57 Mauser with a Weaver mount gave me fits. I removed the scope rings and discovered that the bases themselves were misaligned and pointed left. Switching to Redfield style Leupold bases and rings solved the problem. The 7x57's gentle recoil won't kick the rings loose.

The Picatinny rail is a beefier, more versatile improvement to the Weaver system. Almost every AR-style rifle has long Picatinny rails atop, below and to the sides of the barrel, allowing you to mount optics, lights, lasers and other accessories. Because an entire Picatinny base is slotted, it also gives you a lot more latitude on positioning your scope. For example, a Picatinny allows you to mount a Scout type scope farther down the barrel. That's not an option with a Weaver mount.

Ruger has the simplest, most intuitive scope mounts. Starting with its Model 77 Mark II, Ruger milled scope mounting slots directly into their rifle receivers. It requires proprietary Ruger rings, but every new rifle comes with a pair. Tighten the screws on the sides of the bases until they lock in place. I've never had to tighten a Ruger ring, but I do check them.

The only improvement I can see to Ruger's system is if it had a quick release option. Well, guess what ...

Known alternately as Quick Release or Quick Detach, this system features rings that attach to a base with a lever. Some Redfield-style mounts have the QR feature on the base, but most have the QR feature on the ring. A QR ring is always a Weaver or Picatinny style. Both allow you to remove and reattach a scope in seconds with no change in zero. If your rifle has iron sights, you can remove the scope and use the sights.

In thick woods, it can get too dark to use a scope before legal shooting hours expire, especially if you aim down at dark ground at a sharp angle. Also, a deer might be 25-30 yards away, but your scope is zeroed for 100 yards. The QR allows you to quietly remove the scope and take the deer using your iron sights.

Of course, see-through rings attached to a Weaver base allow you to use your sights, as well.

The only complaint I've heard about QR rings comes from Glenn Clark of Vilonia, a rep for H&G Marketing, which represents Leupold & Stevens. Leupold makes a great QR ring, but Clark said the levers rip the insides of his gun cases.

I use all of these systems. My one precision target rifle is a Remington Model 700 5R Stainless Cerakoted chambered in 6.5 Creedmoor with a Nikon Tactical 3-9X40 scope. I use a Leupold one-piece Picatinny rail with Leupold QR rings.

Warne makes QR rings for Ruger. I intend to get a set for my Hawkeye African in 6.5x55 Swedish, which has iron sights. 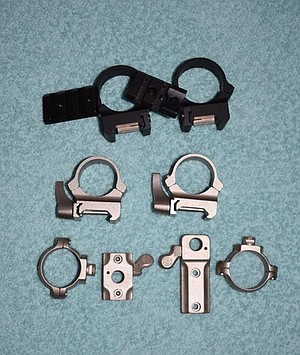 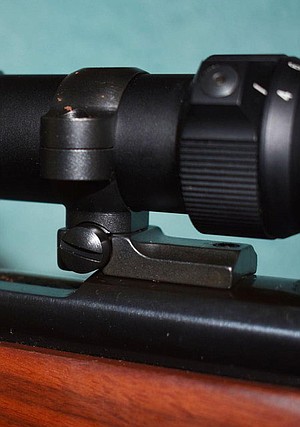 With slots milled directly into the receiver and proprietary rings, Ruger has the simplest and most intuitive scope mounting system. (Arkansas Democrat-Gazette/Bryan Hendricks)
ADVERTISEMENT