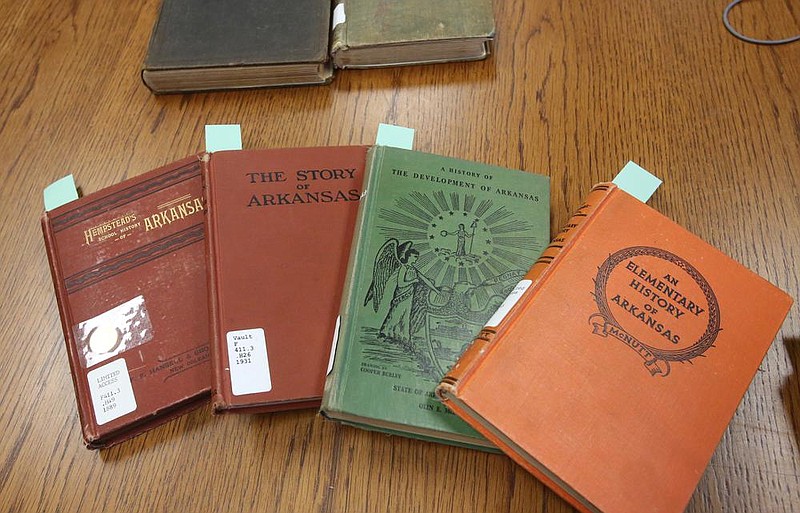 According to historian Charles Russell Logan, “The [United Daughters of the Confederacy]-sponsored histories would prove to be almost as enduring as the monuments of granite, stone and bronze it erected, and no doubt the textbooks had more influence on the consciousness of Arkansans than the lonely soldiers standing guard on the courthouse lawn.” (Arkansas Democrat-Gazette/Thomas Metthe)

Throughout much of the 20th century, Arkansas schoolchildren were fed a steady diet of Confederate propaganda.

"Fine white men of the South" organized the Ku Klux Klan to prevent "ignorant Negroes" from voting and to "keep them in their right places," John H. Moore wrote in "A School History of Arkansas," which was published in 1924 and approved by the state Textbook Commission for use in Arkansas schools.

Moore, a Baptist minister from Pine Bluff, was a "professional Klansman" when he wrote the book, said Kenneth Barnes, a professor of history at the University of Central Arkansas in Conway.

"He was so busy with Klan work that by October 1922 he resigned his preaching job to become a full-time national lecturer for the Klan," Barnes wrote in a book tentatively titled "The Ku Klux Klan in 1920s Arkansas: How White Protestant Nationalism Controlled a State." It's scheduled to be published by the University of Arkansas Press in April.

Barnes said language sympathetic to the Klan could be found in Arkansas history textbooks used in public schools through the 1960s.

In "Our Arkansas," initially published in 1958 and used to teach fourth-grade Arkansas history for at least the next decade, Walter L. Brown wrote that the Klan was formed "to try to scare the Negroes into being good."

On election day, Union sympathizers "herded the Negroes to the polls like cattle, giving them a few coins or some whiskey and tobacco to vote Republican," Brown wrote in the 1958 edition.

Fed up, white Southern men formed the KKK, according to "Our Arkansas."

"The Klansmen rode to the homes of the Negroes, telling them that they were the ghosts of Confederate soldiers killed in the war," Brown wrote. "The Klansmen told the Negroes to be good and to stay away from the polls on election days. Negroes who refused to obey were visited a second time and taken out and whipped. Negroes who had done crimes but who had not been sent to jail were run out of the state, hanged or burned alive as a warning to others."

"What's so striking about Brown's book is that it thoroughly accepts and promotes in the '50s and '60s the Lost Cause thinking about the Confederacy and Reconstruction that was being created in the early 1900s," Barnes said.

Besides erecting statues across the South that have become lightning rods for protest, the United Daughters of the Confederacy had an influence on the history taught to Arkansas schoolchildren.

"The UDC's most long-lasting effect on understanding of the Civil War in Arkansas may have been through its censorship of textbooks," according to an Encyclopedia of Arkansas entry on the "Lost Cause Myth of the Confederacy" by Carl H. Moneyhon, a professor of history at the University of Arkansas at Little Rock.

"In 1917, it successfully forced the publisher of Henry Bourne and Elbert Benton's History of the United States to send page proofs of their proposed book to the UDC for approval, and the state textbook commission withheld the contract for the book until the publisher made desired corrections," Moneyhon wrote.

"Subsequently, texts used in United States history classes adhered closely to the Lost Cause narrative. Arkansas history texts, in particular, were brought into line, and textbooks used in both white and black schools into the 1950s emphasized the legitimacy of secession, the heroic sacrifice of Confederate Arkansans, and the very limited place of African Americans and white Unionists in the story. Such texts remained in use into the 1960s."

"The first element in this Southern version of history involved a set of ideas about the character of the antebellum South, which was pictured as a world populated by descendants of English cavaliers and happy slaves, a virtual paradise that produced brilliant statesmen and military leaders," according to Moneyhon. "The South's labor system was depicted as a paternalistic one that existed for the good of African Americans, not for their exploitation."

The Lost Cause narrative didn't acknowledge slavery as a primary cause of the Civil War, Moneyhon wrote.

In the decades after the Civil War, textbooks glorified the Union soldier, wrote Charles Russell Logan in "Something So Dim It Must Be Holy," a booklet published by the Arkansas Historical Preservation Program.

"By 1892, Confederate veterans were irritated by what they saw as a Northern bias in history textbooks, and at the United Confederate Veteran national convention that year they appointed a committee on history to choose 'proper' books for Southern schools," Logan wrote. "Both sides were equally aggressive in promoting their slanted histories."

The United Daughters of the Confederacy continued the fight well into the 20th century.

"For years, the UDC was active in approving textbooks for the state's school children and in fact had an 'Endorsement of Books' committee," Logan wrote. "In 1917, when the Arkansas General Assembly passed a bill to establish a Textbook Commission 'to provide for a uniform system of textbooks in the common schools,' the UDC moved quickly to exert its influence on the commission. The commission agreed to a petition that the state UDC historian 'examine and pass on the U.S. histories before adoption.'"

"The UDC-sponsored histories would prove to be almost as enduring as the monuments of granite, stone and bronze it erected, and no doubt the textbooks had more influence on the consciousness of Arkansans than the lonely soldiers standing guard on the courthouse lawn," Logan wrote.

Kimberly Mundell, a spokeswoman for the Arkansas Department of Education, said the agency didn't have historical information regarding the United Daughters of the Confederacy and the state Textbook Commission. She said the commission was dissolved sometime before 2014.

Flossie Moore, 82, of Louann, said she attended the all-Black Shady Grove School through sixth grade, then the segregated Lafayette School near Camden until she graduated in 1955. She doesn't remember any references to the Klan in her books.

"In the classes I attended, we never studied the KKK," she said. "As a matter of fact, my family never talked about them. We knew of their existence."

In an Encyclopedia of Arkansas entry about the United Daughters of the Confederacy, Wanda Dean wrote, "The organization continues its mission of memorializing and celebrating the Confederate cause. However, in the 21st century, many Americans have called this purpose into question and, instead, see the UDC as promoting the Lost Cause myth at the expense of a more full account of the past, through its censorship of public school textbooks in the early and mid-20th century and through its sponsorship of Confederate monuments. As part of this, some have advocated for the removal of Confederate monuments from public land."

In a 1905 textbook, "Makers of Arkansas History," author John Hugh Reynolds wrote that "many good citizens joined the Klans."

"If a Negro gave any trouble by his impudence, idleness or thieving, he was visited by the Klan, flogged and warned of a worse punishment if the offence were repeated," Reynolds wrote in the book that, according to its preface, was suitable for third-, fourth- or fifth-grade pupils.

Occasionally, obnoxious carpetbaggers were also whipped, according to Reynolds.

"The Klans doubtless did much good at first, but later some of them fell under the control of reckless young men," Reynolds wrote.

"A characterization like that expressed in that book of the Klan as perhaps being an early force for order (however regrettable the need) and then later falling into a pernicious organization of riff-raff was one I heard fairly often in childhood," said Barrier, 49, of Little Rock, who is the Certified Local Government coordinator for the Arkansas Historic Preservation Program. "I had the impression at the time that this might be the sort of more progressive or genteel Lost Cause opinion."

Olin E. McKnight's United Daughters of the Confederacy-approved textbook "Living in Arkansas" implied that violence against Negroes during Reconstruction was justified because they were "idle, penniless, lawless; they stole, plundered, burned houses and at times committed other crimes -- often encouraged by carpetbaggers and scalawags in these acts of lawlessness," wrote Fred Arthur Bailey, a professor of history at Abilene Christian University in Texas.

Arkansas' slanted history regarding race set the stage for the Little Rock Central High School crisis in 1957, Bailey wrote in a 1996 article for the Arkansas Historical Quarterly.

"However hysterical Little Rock's white parents seemed in making their stand for segregation, they had, in fact, responded predictably according to the history lessons they had been taught," Bailey wrote.

"Those bold parents who stood before Central High School shouting insults at young African-American students had been taught a type of history which both prompted and authenticated their actions. Their Arkansas textbooks had provided educational grounding for their defiance of the federal government and for their determination to deny African-American children an adequate education." 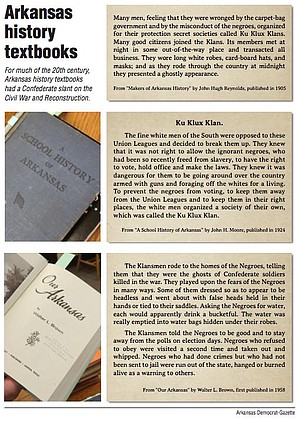