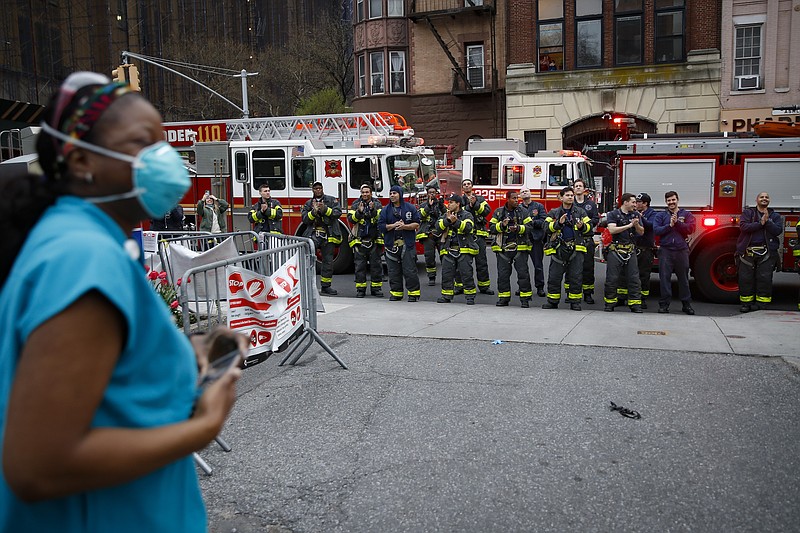 FILE - In this April 14, 2020, file photo FDNY firefighters gather to applaud medical workers as attending physician Mollie Williams, left, wears personal protective equipment due to COVID-19 concerns outside Brooklyn Hospital Center in New York. Essential workers are lauded for their service and hailed as everyday heroes. But in most states nurses, first responders and frontline workers who get COVID-19 on the job have no guarantee they'll qualify for workers' comp to cover lost wages and medical care. (AP Photo/John Minchillo, File)

WASHINGTON -- Lauded for their service and hailed as everyday heroes, essential workers who contract coronavirus on the job have no guarantee in most states that they'll qualify for workers' compensation to cover lost wages and medical care.

Fewer than one-third of the states have enacted policies that shift the burden of proof for coverage of job-related covid-19 so workers such as first responders and nurses don't have to show they got sick by reporting for a risky assignment.

Debate over workers' comp in the states is part of a much larger national discussion about liability for virus exposure.

And for most employees going back to job sites as the economy reopens, there's even less protection than for essential workers. In nearly all states, they have to prove they got the virus on the job to qualify for workers' comp.

Nurse Dori Harrington of Manchester, Conn., said she got covid-19 caring for infected patients at a nursing home, with limited protective gear. Harrington was severely ill and missed five weeks of work, yet her workers' comp claim was initially denied on grounds that her disease was "not distinctively associated with, nor peculiar" to her job.

"It's great to be appreciated, but we need to be taken care of, too," said Harrington, who eventually won her claim. "Nobody should have to fight to be taken care of when they were simply doing their job taking care of other people. It's obnoxious to me."

Workers' compensation is not health insurance, or an unemployment benefit. The $56 billion, state-level insurance system is one of the nation's oldest forms of a social contract. In exchange for coverage, workers give up the right to sue their employers for job-related harms. Employers pay premiums to support the system. Complex rules differ from state to state.

Dealing with job-related injuries is fairly straightforward, but diseases have always been trickier for workers' comp, and covid-19 seems to be in a class of its own.

"You don't know per se where you inhaled that breath whereby you became infected," said Bill Smith, president of the Workers' Injury Law & Advocacy Group, a professional association of lawyers representing workers.

"When you are talking about certain kinds of front-line workers, out in the trenches, day in and day out, that person starts to look like the coal miner who is routinely exposed to a hazardous health condition because of their work," he said.

Acknowledging such realities, more than a dozen states have enacted policies known as "presumptions" that relieve essential workers like Harrington of having to prove how they actually got covid-19 on the job.

At the federal level, there's a push to protect workers at the Transportation Security Administration and the Postal Service.

Duff predicts most states will be reluctant to expand protections.

In Colorado, a drive to enact a covid-19 presumption for essential workers stalled in the legislature over cost concerns.

"At a time of community spread of a disease like this, it is not appropriate for a workers' comp system to act as a public safety net," said Edie Sonn, head of public affairs for Pinnacol Assurance, Colorado's leading workers' comp insurer, which opposed the effort.

Certain businesses would have seen premiums rise up to 27%, she added.

Industry expert Stefan Holzberger of the AM Best credit rating agency said there's a risk of significant losses for workers' comp insurers, but there are also potential mitigating factors. The bottom line isn't clear yet.

"From what we see so far, the average claims cost associated with a covid-19 claim is less than the loss associated with a typical workers' comp claim," Holzberger said. "Going to the hospital and getting a test is a lot less than getting neck or back surgery." 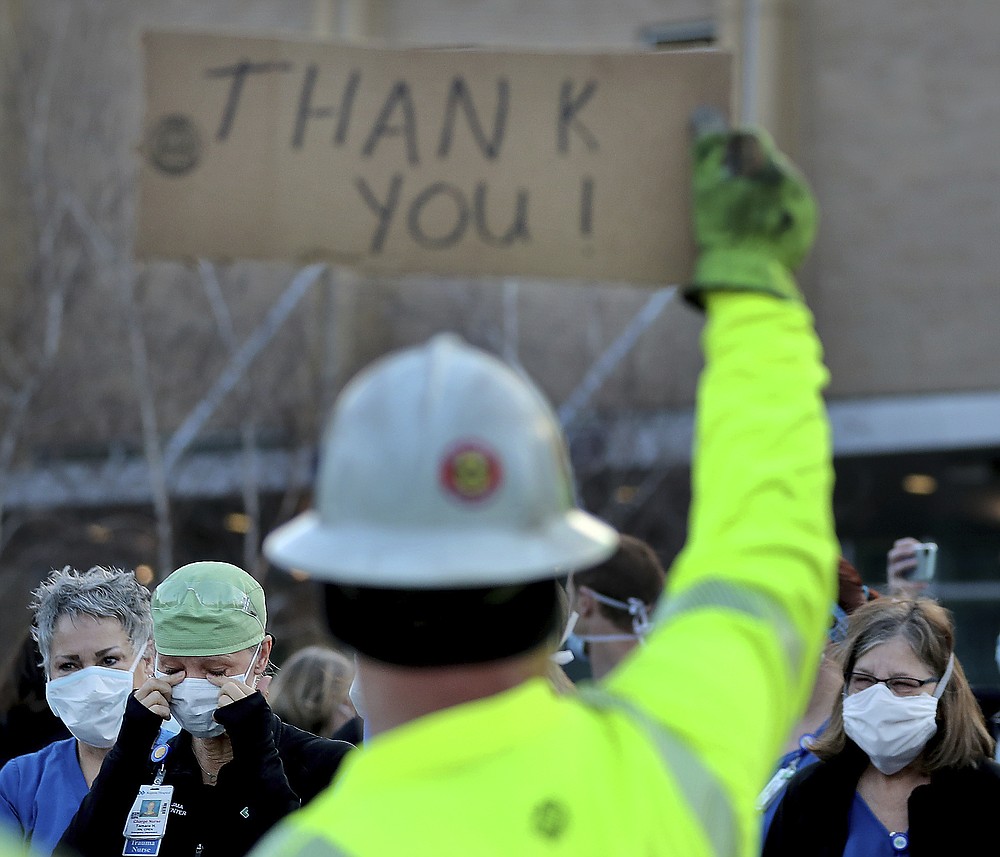 FILE - In this April 22, 2020, file photo healthcare workers, including ER nurse Tamra Hill, front left, wiping away tears, at Regions Hospital to thank Xcel Energy crew members, including Paul Peikert, who had lined the street outside Regions to greet healthcare workers at a morning shift change in St. Paul, Minn. Fewer than one-third of the states have enacted policies that shift the burden of proof for coverage of job-related COVID-19 so workers like first responders and nurses don't have to show they got sick by reporting for a risky assignment. (David Joles/Star Tribune via AP, File) 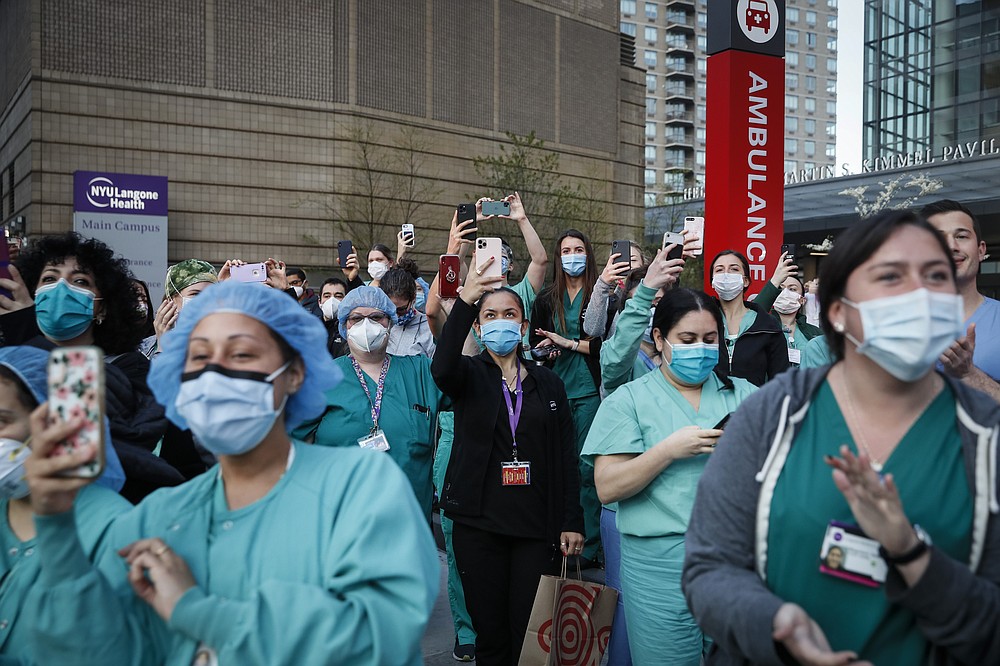 FILE - In this April 28, 2020, file photo Medical personnel attend a daily 7 p.m. applause in their honor, during the coronavirus pandemic outside NYU Langone Medical Center in the Manhattan borough of New York. Essential workers are lauded for their service and hailed as everyday heroes. But in most states nurses, first responders and frontline workers who get COVID-19 on the job have no guarantee they'll qualify for workers' comp to cover lost wages and medical care. (AP Photo/John Minchillo, File)
ADVERTISEMENT