Why can't we stream every Broadway show? 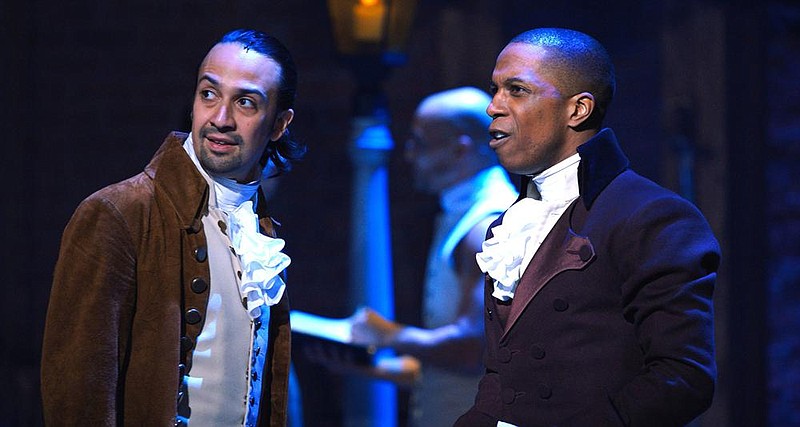 founder of Marquee TV, an arts-

oriented streaming service that launched in February, gets the question all the time: "People have been asking us when we were going to have 'Hamilton.'"

His answer: "Well, if we had 'Hamilton,' we would change our name to The Streaming Platform That Has 'Hamilton.'"

The platform that has Lin-Manuel Miranda's blockbuster is Disney+, which paid about $75 million for the live capture that premiered July 3. (In what surely must be a coincidence, Disney+ has dropped its free trial period.)

While watching theater on a screen now feels a bit weird, live telecasts were common in the late-'40s, 1950s and early 1960s, when programs like Playhouse 90, Studio One and The U.S. Steel Hour displayed the work of the finest playwrights, directors and actors.

Some of them are even streamable. Amazon Prime, for example, offers a 1957 telecast of Alfred Lunt and Lynn Fontanne, once Broadway's royal couple, starring in "The Great Sebastians."

What about other options? While the state of theater streaming is in perpetual flux, here are answers to the most common questions. Be warned, however, that "Hamilton" is an outlier among Broadway hits.

Q: Where do I find musicals online?

A: There is actually a lot out there. The websites Filmed on Stage and Thespie can help point you to many of them, such as the West End production of "Gypsy," starring Imelda Staunton and available to buy or rent on Amazon, iTunes and YouTube. Musicals are a portion of the long-running PBS Great Performances series, while Netflix lists popular properties as different as "Shrek the Musical" and "Springsteen on Broadway." HBO will present the Spike Lee capture of "David Byrne's American Utopia" later this year.

A: Yes, and to nobody's surprise the popularity of subscription-based platforms has increased in recent months. The closest thing to a Netflix for theater is BroadwayHD, which has about 300 titles in its catalog, from hits like "Kinky Boots" to vintage nuggets, including Lee J. Cobb reprising his Willy Loman in a 1966 CBS telecast of "Death of a Salesman." The British-American Marquee TV is another service that offers all-you-can-watch for a weekly, monthly or annual fee. (Broadway On Demand is a newcomer in this market, and while its original interview programming seems promising, its high-profile stage offerings are underwhelming so far.)

Q: Why aren't all the big Broadway shows available for streaming?

A: Video recording a show is up to individual producers. They have tended to pass on the opportunity for two main reasons: cost, and the fear that streaming will cannibalize ticket sales. "To do what 'Hamilton' did would require a real outlay of cash from the producers," said Charlotte St. Martin, the president of the Broadway League. That show's three lead producers, who have made fortunes from it, financed the filming themselves; for others, a multicamera investment can be prohibitive.

Q: What about those National Theater and Royal Shakespeare Company captures?

A: Britain and many other European countries got a head start because digital initiatives were made a condition for state funding, to help achieve accessibility, equity and sustainability. "Most countries started with that top-down view of digital, whereas in the United States it's an upside-down approach, which is one reason everything has lagged behind so much here," said Marquee TV's Kirschner.

He also points out that video recording is prohibitively more expensive in America. "To capture a Broadway production costs five to 10 times what it would overseas," he said.

Q: Why can I watch some streams whenever I want but for others I have to log in at a specific time?

A: There are three basic types of streaming. With livestreaming, you watch a show as it unfolds live, usually by buying a ticket or making a donation ahead of time. With scheduled streaming, audience members watch a recording of a show at a specific time. Streaming on demand is either a subscription model à la Netflix or timed access where customers buy a ticket and have, say, 48 hours to watch the show.

Q: With no Broadway until Jan. 3, at least, will we run out of new material to stream?

A: "We have enough in the pipeline to take us well into next year, when we can start shooting again," said Bonnie Comley, co-founder and co-CEO of Broadway HD.

Producers are also looking at ways to capture shows performed in front of empty or socially distanced houses. Actors' Equity Association is in the process of reviewing pandemic-prompted agreements, including for Zoom shows, that were released in March.

"One was to allow theaters to exhibit online archives of their productions, another to allow producers to do remote work," said Lawrence Lorczak, a senior business representative for the union. "We're in the middle of reviewing the terms for those two to make them more accessible for the producers and theaters."