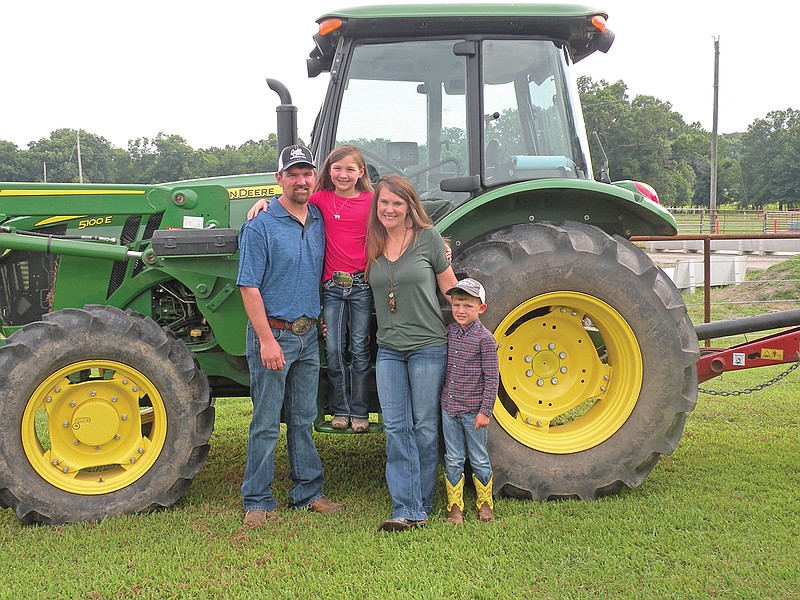 James and Tiffany Miller barely had time to process the fact that they had been named the 2020 Yell County Farm Family of the Year when they were told they had won district honors as well.

The Millers have two children — a daughter, Maeleigh, 9, and a son, Chap, 5. The couple farm 630 acres. Their operation includes raising 200 to 250 acres of Bermuda grass for hay, 210 cows and 30 to 50 hogs. They are also part of the family business, Miller’s Quality Processing in Centerville.

“This is quite an honor,” James said. “We’ve put a lot of hard work into it.”

“Farms … like ours don’t often get a lot of recognition,” Tiffany said. “It’s just nice to be acknowledged for doing a good job.”

Tommy Fink, president of the Yell County Farm Bureau Board of Directors and a member of the local nominating committee for the farm-family program, presented the family with a plaque on June 20.

“We knew you would be the perfect farm family,” Fink told the Millers.

“That’s why we picked you. You are representing Yell County well, and you will represent this district well, too,” Fink said.

“For the Millers, farming is not a job, but a way of life,” said Bob Powell, county extension agent for agriculture, Yell County Cooperative Extension Service, University of Arkansas, Division of Agriculture. “Their family has always been huge supporters of our youth by donating both time and money to our local 4-H and FFA programs.

“They utilize our local NRCS (Natural Resources Conservation Service), FSA (Farm Service Agency) and Extension programs to stay up to date on the best farming practices while protecting our environment,” Powell said. “Many Yell County residents depend on their processing facility to process home-grown beef and pork, as well as deer during the hunting season.”

“We rely on customers’ word of mouth for advertising, along with Facebook,” he said, adding that Miller’s Quality Processing staffs four to eight people, “other than ourselves, dependent upon the season.”

“We butcher beef, hogs, lambs, goats, etc. for many livestock producers in the region,” he said. “We take orders through our business for our beef and hogs, as well, and process them here … locally raised and processed from our farm. For our customers unable to purchase in this way, we offer a fully [U.S. Department of Agriculture]

-inspected meat counter that is open to the public. We offer a variety of meats five days a week for our customers.”

James, 37, is a son of Gordon and Dianna Miller of Centerville. He grew up in Dardanelle and graduated from Dardanelle High School in 2001. At a young age, he began working alongside his dad, butchering animals for meat. The family moved to Centerville and built the family processing facility and had a small cattle herd as well.

In 2001, James purchased his first set of cattle, 28 pairs, and bought 40 acres close to the family.

Tiffany, 36, is a daughter of Terry and Janice Womack of Little Rock. She graduated from Mills High School in Little Rock in 2002 and from Arkansas Tech University in Russellville in 2006 with a Bachelor of Science in Nursing degree. She worked as a hospice nurse at Chambers Memorial Hospital in Danville. She left nursing four years ago to help James on the farm and at the processing plant.

“I do keep my nursing license current,” she said.

James and Tiffany met through mutual friends and have been married since 2006.

Tiffany said James’ dad retired four years ago, “and we made the decision to take on the responsibility of the business and to become more involved.”

James said major problems on the farm include the weather, which, he said, the couple cannot control, and “working to battle the excessive amounts of mud due to the rains and floods we have received the past few years.”

“We recently have installed some concrete areas, along with new feed bunkers, in an attempt to prevent the calves from standing in the mud,” he said. “This, hopefully, will prevent the erosion in our working and feeding areas as well. In turn, our calves should finish faster with the ability to maintain more of their feed consumption versus wasting it in energy to fight the mud.”

James said a major problem with the family’s business now is the nationwide panic over meat as a result of the COVID-19 pandemic.

“This has overwhelmed our small business, which is a good thing. … We have been able to hire some temporary workers who wouldn’t have a job, and we’ve been able to maintain our business, unlike so many, … but it’s definitely had its challenges,” he said.

“The panic for meat has nearly emptied our shelves at times. We have been very lucky with our meat brokers in the ability to continue for us to get inspected meat in to provide to our customers without limits,” James said.

“It has also brought a big push for locally raised meat, which is great for farmers. The demand, however, is exceeding our supply for the time and also exceeding our timing,” he said. “There are simply not enough hours in the day to keep up with the demand, which has resulted in us having to push slaughter dates out four months. This is a struggle, having to tell our customers they have to wait for butcher dates, but it’s where the business is currently.

“We are anxious to see how this pandemic affects our business in the long run. For long-range planning, it’s difficult to know how many calves to start feeding out … to know if this demand will continue or die out once the country returns to ‘normal business.’”

The Martins recently built a new show barn for their children to work with their animals.

Maeleigh started showing animals when she was 6, with a goat.

“She has loved the show life and increased her involvement greatly over the years,” James said. “She now shows cattle at county and state livestock shows, along with cattle-show jackpots around the region.”

Maeleigh also raises chickens and shows them at the county fair. She participates in other 4-H activities, including workshops on canning, cooking, sewing and crafts. Last year, she purchased her first Simmental heifer, and her goal is to have a small herd of her own and raise her own show cattle.

Chap is not quite old enough to participate in 4-H, but he helps Maeleigh with her chickens and has a small pony he is learning to handle.

“I did not come from a farming background,” Tiffany said, smiling. “I have learned with James, and now I love it. I do not miss nursing at all. My caring abilities now apply to our animals. … I can pull a calf, doctor a calf. … I play veterinarian a lot.

“James and I are super lucky. A lot of couples could not work together like we do. We just make it happen. It works for us.”

James and Tiffany are members of the Yell County Cattleman’s Association and the Arkansas Farm Bureau Young Farmers and Ranchers.

“We, as a family, are very involved in our county fair, from feeding the livestock-show participants to showing and participating in the county sale,” James said.